Be Honest To Godless in the Next Irish Census

The next Irish Census is on Sunday 3rd April 2022. This was posponed from April 2021 due to Covid.

We are asking you to think before you tick your answer to the religion question, and give an answer that matches your actual religious affiliation. If you still believe in God but you are no longer truly a Roman Catholic, please say so. If you are an atheist or agnostic or humanist and you have no religion, please tick the ‘No Religion’ box.

For more information visit our Be Honest To Godless Facebook Page 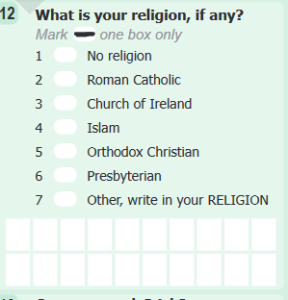