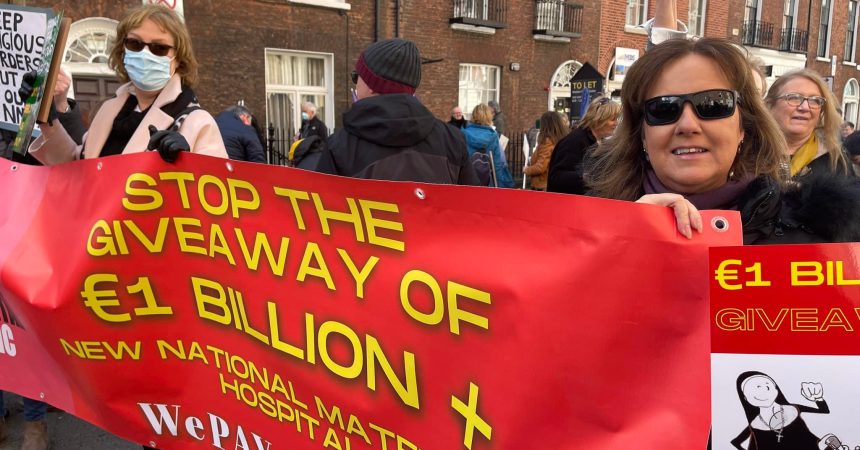 There will be a rally outside the Dáil at 2pm this Saturday, 14 May, organised by the Our Maternity Hospital campaign, of which Atheist Ireland is a member.

The very fact that the Government has to try so hard to reassure us that the hospital will be safe from religious influence is itself evidence that the State should own and directly run the National Maternity Hospital.

The State should not cede control over this essential public service to any private body, never mind to a charity associated with the Catholic church, which has an appalling record of human rights abuses and an ethos that opposes reproductive rights for women.

Whatever assurances it might seem to give, the Catholic church simply cannot be trusted. Not only did they commit appalling crimes against women and children, but State tribunals found that its Bishops positively lied to and deliberately misled them to cover up those crimes.

This included inventing different accounts of meetings about child abusers, and using a theological concept called ‘mental reservation’ to justify arguing that when they said they cooperated with the police, they never said they ‘fully’ cooperated.

We should not trust any deal approved by the Vatican, which is the headquarters of a global religion that poses as a quasi-State when it suits its purposes. Its primary mission is not to provide healthcare, but to evangelise people into Catholicism.

Politicians always assure Atheist Ireland that, if they were starting from scratch, they would not have given the Catholic church the influence it has over our schools. So why are they even involving this church in the planning of our new National Maternity Hospital?

Atheist Ireland campaigns for a secular healthcare system based on compassion, human rights and the medical needs of patients. No religious values should be imposed on patients who do not share those religious beliefs.

The State should remove, not reinforce, the traditional privileges that religious bodies have in our healthcare provision. The best way to ensure this is that the State should own and directly run the National Maternity Hospital.