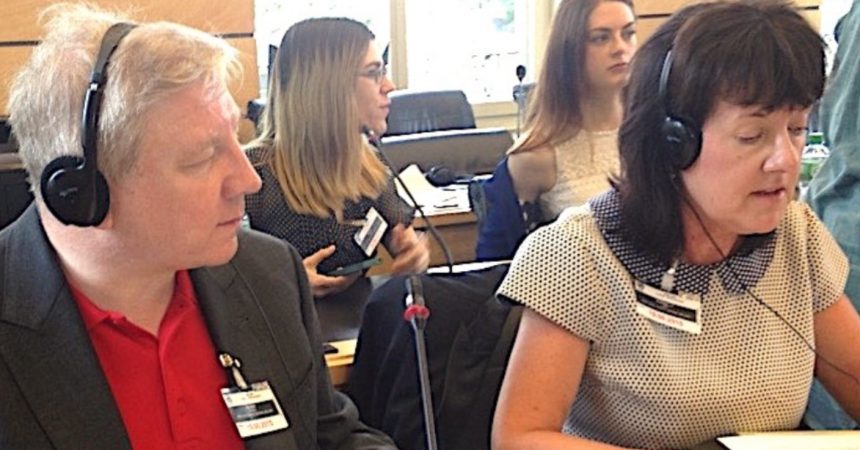 Combating intolerance against persons based on religion or belief

Atheist Ireland has made the following input to a United Nations report about combating intolerance, negative stereotyping, stigmatisation, discrimination, incitement to violence and violence against persons, based on religion or belief, as set forth in UN Resolution 76/157.

1. The need to consistently use the phrase ‘based on religion or belief’

2. The balance between freedom of religion or belief and freedom of expression

3. Discrimination in Ireland based on religion or belief

4. Discrimination and persecution in Pakistan based on religion or belief

1. The need to consistently use the phrase ‘based on religion or belief’

Resolution 76/157 aims to protect people from unjust outcomes based on their ‘religion or belief’. The ‘belief’ part of this phrase includes nonreligious philosophical convictions, the holders of which have the same level of protection as the holders of religious beliefs.

In the Venice Commission Guidelines for Legislative Reviews of Laws Affecting Religion or Belief includes it states that:

International standards do not speak of religion in an isolated sense, but of “religion or belief.” The “belief” aspect typically pertains to deeply held conscientious beliefs that are fundamental about the human condition and the world.

Thus atheism and agnosticism, for example, are generally held to be equally entitled to protection to religious beliefs. It is very common for legislation not to protect adequately (or to not refer at all) to rights of non- believers.

Although not all beliefs are entitled to equal protection, legislation should be reviewed for discrimination against non-believers.”

We note that section 7 begins by saying that the actions in it are called for by the Secretary-General of the Organisation of Islamic Cooperation. This section has seven references to ‘religion’ and only one reference to ‘religion or belief.’

We ask the United Nations and Member States to consistently use the phrase ‘based on religion or belief’ when discussing this issue.

2. The balance between freedom of religion or belief and freedom of expression

As atheists, we empathise with members of other groups who face prejudice and discrimination in Ireland, because we have first-hand experience of it. We also recognise that members of other groups face more frightening hostility in Ireland, including overt harassment, intimidation and violence. We should all stand together to challenge prejudice and hostility against any and all of us, and to protect the values of Western liberal democracy that enable us to do so.

Atheist Ireland made a submission about Freedom of Thought in 2021 to Ahmed Shaheed, the United Nations Special Rapporteur on Freedom of Religion or Belief. In this we highlighted:

The Right to Not Be Penalised for Your Thoughts
Laws against what some people describe as ‘hate crimes’ must be based on human rights standards. We cannot change how people think and feel by making it illegal. We should tackle prejudice against groups through education and community leadership, and tackle prejudice-motivated crime through the law, where the prejudice is an aggravating factor as a motive for an existing crime.

The Right to Receive Information
The right to freedom of thought implies to right to seek and receive information that can inform the development of your thoughts. This is recognised by resolution 59 of the UN General Assembly adopted in 1946, as well as by Article 19 of the Universal Declaration of Human Rights (1948). This is part of the problem with censorship and blasphemy laws. Not only do they interfere with the right to express information, but they also interfere with the right to seek and receive information.

The Right to Nonreligious Philosophical Convictions
There is an established internationally recognised human right to be atheist, agnostic, secular, humanist, or in any other way free from religion. Authoritarian theocrats frequently breach this right in practice, or deny that this human right exists, citing Catholic Canon Law or the Sharia-based Cairo Declaration on Human Rights in Islam. But the primacy of universal rights is enshrined in the key international human rights Treaties and associated Court judgments and must be upheld.

Atheist Ireland made a submission in 2019 to the Irish Department of Justice’s consultation on hate crime and hate speech laws. In this we highlighted:

The Law Should Say ‘Prejudice-Motivated Crime’ Not ‘Hate Crime’
Laws should be accurate, understandable, and enforceable. Their words and definitions should be coherent, universal and inclusive, with clear and justified boundaries, and free from ideological assumptions. A person should be able to know whether or not they are breaking it.

The Law Must Not Become a Blasphemy Law by Another Name
Because religion is one of the characteristics that is protected under the law, there is a danger that this might evolve into becoming a blasphemy law by another name. The law should take into account the same principles that led to the law against blasphemy being removed from the Constitution, and soon to be repealed from our statute law.

We should Tackle Prejudice with Education, Tackle Crime with the Law
On the one hand, we can only change prejudice, bias and hatred by education, political and community leadership, and social pressure. On the other hand, we can challenge hostility, discrimination and violence by making it illegal. And we can make prejudice an aggravating factor when it is a motive for an existing crime. While doing both of the above, we should not criminalise people merely because of what they say or publish, no matter how repugnant their views, unless what they say or publish is defamatory, or a direct incitement to violence or another crime.

3. Discrimination in Ireland based on religion or belief

Atheist Ireland made a complaint this year to the Comptroller and Auditor General about the misuse of public funds by the Department of Education regarding the right to not attend religious instruction in Irish schools.

Under Article 44.2.4 of the Constitution, it is a condition of State funding for schools that any child can attend that school without attending Religious Instruction at that school. This right is supported by other Constitutional Articles, laws, and policy which we outline in this complaint. The funding of schools is conditional on this right being vindicated, yet the State is currently providing funding while ignoring this Constitutional condition. This is a misuse of public funds.

Atheist Ireland made a submission in 2021 to the Irish Government’s Consultation on the Review of the Equality Acts.

In that submission we recommended amending the category of ‘religion’ under the Equal Status Act and the Employment Equality Act (and any other relevant Acts) to ‘religion or beliefs,’ and clarifying that beliefs include positive philosophical convictions that are not based on religion.

Currently these Acts refer only to ‘religion’ and not to ‘religion or belief.’ The definitions include “… or one has a religious belief, background or outlook and the other has not.” This discrimination undermines the right to freedom of conscience, as those of us with nonreligious beliefs or philosophical convictions are not treated equally.

As well as the Irish Constitution, this discrimination in our Equality Acts does not reflect the following legal instruments:

Atheist Ireland, the Evangelical Alliance of Ireland, and the Ahmadiyya Muslim Community of Ireland, made a joint submission to the UN Human Rights Council when it questioned Ireland under the UPR in 2021.

In this joint submission, we called for the following, none of which have happened. We ask that the report on Resolution 76/157 addresses the lack of progress on these issues in Ireland.

2. Put in place human rights based Statutory Guidelines on the right to not attend religion classes which are not neutral and objective, and religion that is integrated in to other curriculum subjects, and offer an alternative timetabled subject, consistently with a legal opinion obtained by Atheist Ireland on this issue, and with recommendation 36 (CRC/c/IRL/co/3-4) 2016 of the UN Committee on the Rights of the Child.

3. Hold a referendum to remove the obligatory religious oaths in the Irish Constitution for President, Judges, and members of the Council of State which includes the Taoiseach and Tanaiste, and replace them with a single declaration that makes no reference to the person’s religion or beliefs, consistently with repeated recommendations from the UN Human Rights Committee.

4. Respect the right of asylum seekers to self determination on the basis of religion or belief, and ensure that asylum seekers have access to welfare and housing support as the Direct Provision centres are not suitable places for those fleeing persecution.

In May 2020 Atheist Ireland sent a submission to Dr Fernand de Varennes, the UN Special Rapporteur on Minority Issues. As part of our submission we raised the following points regarding the Charities Act and tax law:

“6.6 The Irish Charities Act and tax law discriminate against minorities with nonreligious philosophical convictions, by giving financial privileges to religious bodies only. For example, the advancement of religion is considered a charitable purpose, but the advancement of atheism is not. Religious bodies are not taxed even on income that is not raised or used for genuine charitable purposes but for political purposes such as campaigning to maintain the ban on abortion.”

4. Discrimination and persecution in Pakistan based on religion or belief

Atheist Ireland, the Evangelical Alliance of Ireland, and the Ahmadiyya Muslim Community of Ireland, made a joint submission to the UN Human Rights Committee when it questioned Pakistan under the ICCPR in 2017. We also jointly attended the session in Geneva and raised these issues directly with UNHRC Committee members.

In our submission and at the session, we highlighted ICCPR Rights that are not guaranteed and protected; blasphemy laws and related violence; freedom of religion, belief, and privacy; and the right to life and the protection of the State. Specifically, we called for the following, and we ask that the report on Resolution 76/157 addresses progress on these issues in Pakistan.

The constitutional rights of nonreligious parents in Irish schools