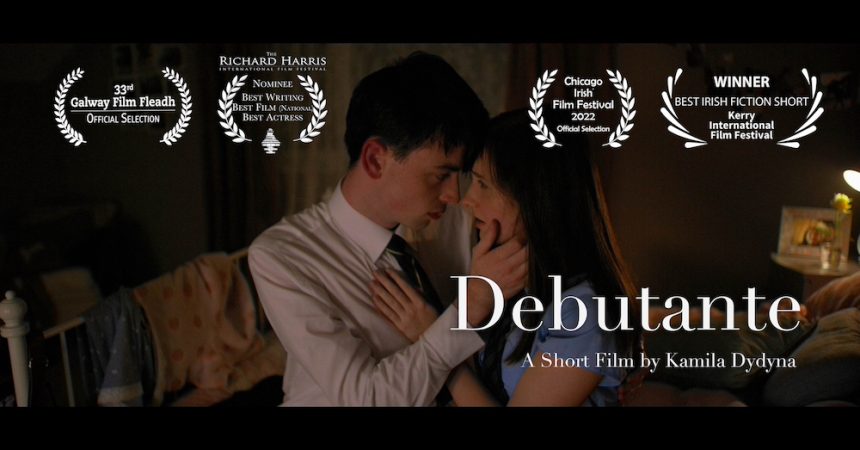 In ‘Debutante’, Meg’s simple life revolves around her duties as a Jehovah’s Witness and a platonic relationship with her boyfriend Sam. It all goes well until she is summoned to a judicial committee hearing of three congregation elders obsessed with controlling her sexuality.

Meg faces the threat of being ‘disfellowshipped’ or shunned by the community which she has grown up to believe to be the only route to salvation. Shunned people effectively become ghosts, with no interaction from their friends or even family members.

You can watch the trailer for the film here, or at the end of this article.

Atheist Ireland became partners of the film when Kamila Dydna approached us way back in the pre-Covid world of 2019. Kamila is a former Jehovah’s Witness living in Ireland, and her script was based the experiences of many young co-religionists in her native Poland.

You can watch Kamila interviewing Michael Nugent about the film here.

Kamila had a budget of €20,000, modest for a short film but challenging when you don’t have it. She successfully crowdfunded the project through Indiegogo, getting support from cinema fans, secularists, and former Jehovah’s Witnesses around the world.

Casting and production in 2020 were delayed by a global catastrophe and personal joy, as the Covid pandemic coincided with Kamila becoming pregnant. She had 24/7 morning sickness when she cast Úna O’Brien as Meg by Skype, and the drama intensified when her car was broken into on the first day of shooting.

You can read Kamila’s more detailed account of making the film here.

Úna has since been nominated for Best Actress in the Richard Harris International Film Festival, and the rest of the cast produced flawless performances. They include Arthur Riordan, Richard Neville, Sam McGovern, Gary Mullan, Noelle Brown, and Anthony O’Boyle.

Kamila spent 2021 taking care of her newborn daughter Zosia while finalising postproduction. She then traveled to Poland to help her mother recuperate from a heart attack, and discovered while there that the Galway Film Festival had accepted ‘Debutante’.

You can watch Kamila talking about the response to the film here.

As well as being excellently made, ‘Debutante’ is an important short film with regard to its content. It sensitively and dramatically addresses the problems of religious cults controlling the lives and restricting the sexuality of young people.

Each year up to 70,000 former Jehovah’s Witnesses have to start new lives and address mental health issues after being shunned or leaving the religion. But a dramatic short film like ‘Debutante’, by focusing on just one person, can be more powerful than any amount of statistics.

‘Debutante’ is more than a film about one religion. It is a coming-of-age drama about the potential disintegration of a teenager’s identity, and how she responds to that challenge. Kamila hopes that it will bring comfort to anyone who has experienced shunning, for religious or other reasons.

‘Debutante’ will be released globally on video on demand once the festival journey finishes. You can keep up to date on future developments on its Facebook page and Twitter account.