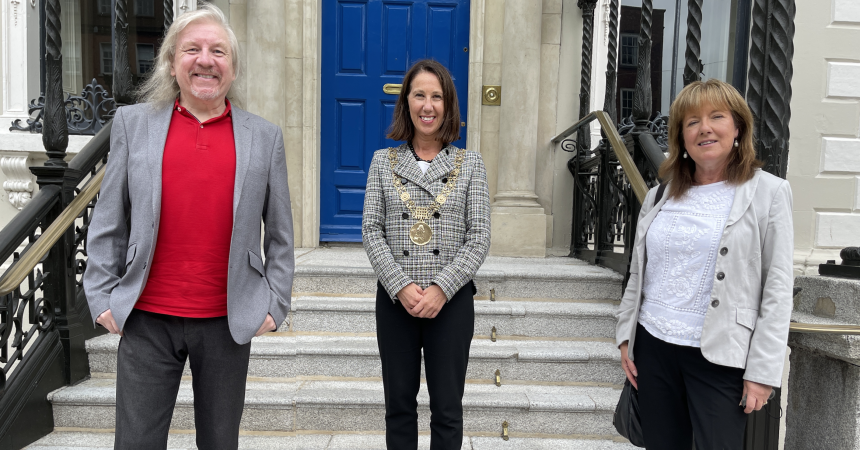 Atheist Ireland this week became the first atheist group to meet with the Lord Mayor of Dublin, Alison Gilliland, as part of the traditional greeting meetings that take at the start of a new Lord Mayor’s term of office.

Typically these meetings include the President, the Taoiseach, the Catholic and Church of Ireland Archbishops, the Chief Rabbi, and a Muslim Imam. This year the new Lord Mayor asked for Atheist Ireland to be added to the groups that she meets.

Michael Nugent and Jane Donnelly, who attended the meeting, welcome this act of inclusion by Lord Mayor Gilliland. It symbolises a recognition that, in an inclusive society, people with nonreligious beliefs are as worthy of respect as people with religious beliefs.

We discussed the importance of freedom of thought, conscience, religion, and belief as a fundamental right protected by the European Convention. It is enshrined in a wide range of national and international texts. The right protects theistic, non-theistic and atheistic beliefs as well as the right not to profess any religion or belief.

We suggested that we need to amend the category of ‘religion’ under the Equal Status Act and the Employment Equality Act. These Acts just refer to ‘religion’ not ‘religion or belief.’ The definitions include “…or one has a religious belief, background or outlook and the other has not.”

This does not reflect the EU Equality Directive which refers specifically to ‘religion or belief’ in a way that equally respects the positive rights of atheists, secularists, and all those with nonreligious philosophical convictions.

This failure to recognise and protect people holding ‘beliefs’ from discrimination has meant that teachers, schools and policy makers do not equally respect the rights of people holding nonreligious beliefs. They see ‘beliefs’ only as a negative right. This has an impact on admissions policies and on the delivery of education within the schools.

We are pleased that Lord Mayor Gilliland has become the first Lord Mayor to meet with Atheist Ireland, and the concern that she has shown for an inclusive society that respects everybody equally regardless of their religious or nonreligious beliefs.