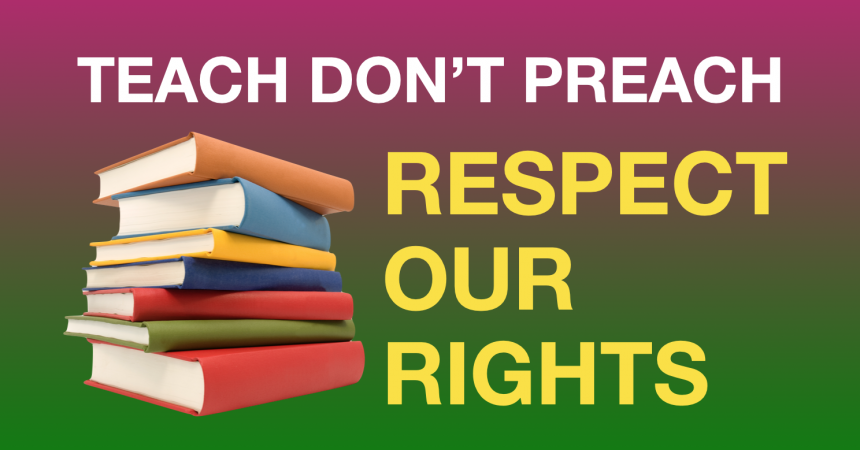 Atheist Ireland has written the following letter to the Oireachtas joint committee on Education, about not attending Religious Instruction in schools, and the recent anti-abortion video shown in a school.

We would like the Committee to take the following into account when it reaches the stage of addressing our legal opinion on the constitutional right to not attend religious instruction in publicly funded schools.

Two recent articles in the Sunday Independent and the Irish Examiner describe an anti-abortion video, produced by the Life Network in Texas, which was shown to Leaving Certificate students during curriculum Religious Education in the Ursuline secondary school in Tipperary.

This video contains many controversial claims, including that women who have abortions are at high risk of developing breast cancer, and that abortion clinics harvest foetal organs to sell them to medical researchers to fight Parkinson’s disease.

Parents and students were not informed before the video was shown about the contents of this video. It was shown during the Religious Education class which the State inaccurately claims is suitable for students from all religions and none.

This behaviour cannot be justified on the basis of religious freedom, as integrating Catholic faith formation or Catholic social policy on abortion into curriculum Religious Education is not necessary or proportionate to uphold the free practice of the Catholic religion.

Catholic families already have a Constitutional right to Catholic religious instruction and Catholic faith formation in publicly funded schools under the patronage of the Catholic Church. This right is reflected in Section 30-2(d) of the Education Act 1998.

The Minister is obliged to leave instruction time in the school day for subjects relating to or arising out of the characteristic spirit of the school. That should not also stray into curriculum Religion, which is supposed to be for students from all religions and none.

How the Teaching Council addressed complaints about the video

A parent of a student complained to the school and the issue went to the Teaching Council, who ruled that the complaint did not warrant a full disciplinary inquiry for the religion teacher involved. The teacher in question told the Teaching Council that the video was distributed during an in-service training day for curriculum Religious education.

The Teaching Council found that a Religious Education teacher showing a video to students that was distributed by private bodies, without the consent of parents, did not warrant a full disciplinary inquiry for the religion teacher.

There is a complete lack of transparency regarding this issue. Under the Constitution parents have rights in relation to the education of their children. In accessing curriculum Religious Education, students are being exposed to videos that are harmful and against the conscience of their parents.

The Professional Development Service for Teachers (PDST) runs registered training days for curriculum Religion teachers alongside the Catholic Church. It seems at the very least plausible that it was at one of these training days that the religion teacher was given the video to show her students.

In the past Atheist Ireland has tried unsuccessfully to obtain information about these training days between the PDST and the Catholic Church but the Information Commissioner found that the PDST are a private body and did not come under the FOI Act.

Consequently, a body that is State-funded but has no legal status, is now working with the Roman Catholic Church to deliver in-service training to religion teachers in State-funded schools, without any day-to-day role for the Department of Education in supervising this work.

Furthermore, there is no public accountability in relation to how this work is conducted. No other religion or belief group is involved, despite the fact that curriculum Religion is supposed to be suitable for students from all religions and none.

Guidelines for the Faith Formation and Development of Catholic Students

The Guidelines for the Faith Formation and Development of Catholic Students are integrated into curriculum Religious Education in publicly funded schools under the patronage of the Catholic Church.

The Department of Education are aware that this is happening. In Circular Letter 0062/2018 the Department told ETB schools that they could not use the Guidelines for the Faith Formation and Development of Catholic students during curriculum Religious Education anymore. This Circular was only for ETB schools and not for schools under Catholic patronage.

Students from minority backgrounds who attend schools under Catholic patronage are not informed that Catholic faith formation is integrated into curriculum Religious Education. This important information is not included in the Admission Policy of the Ursuline secondary school in Tipperary.

As far as we are aware, the vast majority of Catholic second level schools present curriculum Religious Education as a core subject, open to students from all religions and none. This means that they just enrol students into the course and it is up to parents to seek to exercise the right for their child to not attend the subject.

Schools inviting parents to meetings instead of vindicating their rights

The Ursuline secondary school in Tipperary recognises the right of students to not attend religious instruction. It is written into their Admission Policy. However, they do not give the details of the arrangements for students who exercise this right as per Section 62–7(n) of the Education (Admission to schools) Act 2018. Instead the school invites parents into a meeting to discuss the issue.

Parents have informed us that at such meetings in various schools they are coerced into permitting their children to attend religious education on the basis that it is curriculum religion and suitable for all religions and none. Parents are not informed that Catholic faith formation is integrated into curriculum religion.

We have never seen any Guidelines on how a teacher is supposed to teach curriculum religion to all students while at the same time evangelising students from Catholic backgrounds through the Guidelines on the Faith Formation and Development of Catholic Students. How do minority students exercise their Constitutional right to not attend this instruction?

The European Court has already found that differentiated teaching in such classes cannot ensure respect for all parents’ convictions.

In the Supreme Court in 1998 (Campaign to Separate Church case), Justice Barrington said:

“The Constitution therefore distinguishes between religious “education” and religious “instruction” – the former being the much wider term. A child who attends a school run by a religious denomination different from his own may have a constitutional right not to attend religious instruction at that school but the Constitution cannot protect him from being influenced, to some degree, by the religious “ethos” of the school. A religious denomination is not obliged to change the general atmosphere of its school merely to accommodate a child of a different religious persuasion who wishes to attend that school.”(page 26)

The Supreme Court referred to a religious ethos in the ‘general atmosphere’ of a school (which it referred to as religious education) and did not go as far as sanctioning the integration of faith formation or a specific religious ethos into curriculum Religion or indeed any subject, and particularly curriculum Religious Education that is supposed to be for all religions and none. The Supreme Court also said that Article 42.1 (the inalienable right of parents) must be looked at in the context of Article 44.2.4, (the right to not attend religious instruction).

Atheist Ireland objects on the grounds of conscience to this Religious Education course as it is not objective. In addition it is used as a tool of evangelisation by the Catholic Church as faith formation is integrated into the course. This is the reason that the video was shown during the curriculum Religious Education class and the reason why it was distributed at an in-service day organised and funded by the PDST.

This is an issue for the Committee because under the Constitution it is the duty of the State to protect the right to not attend religious instruction. Not attending religious instruction is a condition of the state funding of schools under Article 44.2.4 of the Constitution. It is not up to the State, teachers or schools to decide for parents what is or is not against their conscience or decide to show students a video without their consent particularly during a curriculum course that is supposed to be for all religions and none.