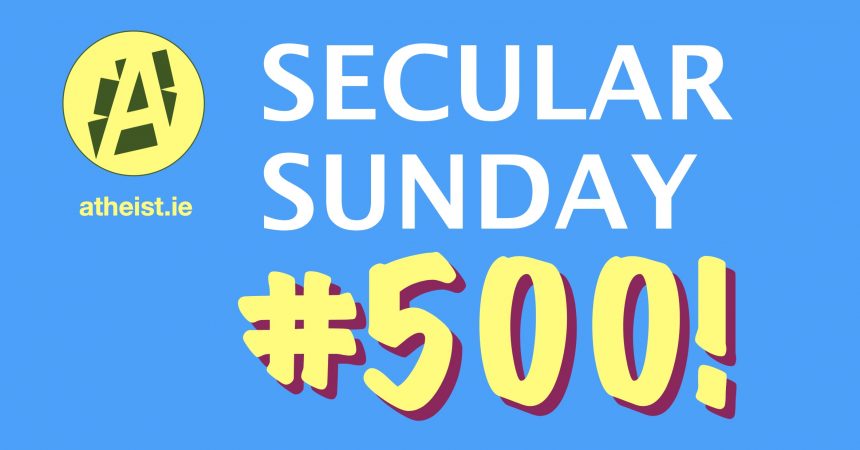 This week sees the publication of the 500th edition of weekly newsletter Secular Sunday. To mark the occasion, here are some extracts from editions number 1, 100, 200, 300, and 400. We’re halfway to edition 1000, which will be published to celebrate the achievement of a secular state in 2031!

Happy New Year, and welcome to Secular Sunday, the new weekly newsletter of Atheist Ireland. It will include details of events, activities, news items and other relevant topics. This first issue is devoted to a review of our main activities during 2011 and  our plans for 2012.

1. Secular constitution and laws
2. Secular education system
3. Other activities
4. Our plans for 2012

Here, as promised, is the new, improved, bigger, brighter, better Secular Sunday. This is, of course, the one hundredth issue and such an anniversary could not go unmarked, especially as it occurs on Evolution Day, and in the week that sees the fifth anniversary of the founding of Atheist Ireland. In order to increase awareness of such auspicious occasions, I have expanded the calendar section to include observances likely to be of interest to ethical atheists, and anniversaries of significant events in atheism, skepticism, science and so on. I’ve also made significant changes to the layout of the newsletter, hopefully making it easier to read and to scan. There’s a poll at the bottom so you can tell me whether it’s been a worthwhile effort.

Supplementary Submission to the Constitutional Convention

Observant readers will have noticed that this is the two hundredth issue of this newsletter, and as I’m not the sort to let a round number go unremarked, it behooves me to say a few words about this milestone.

Little did I think, almost four years ago when Michael Nugent and I discussed the idea of a newsletter for Atheist Ireland that it would get to two hundred issues with me at the helm. Of course, I had suggested a monthly newsletter rather than a weekly one!

My circumstances are such that I can’t currently devote as much time as I would like to supporting Atheist Ireland’s activities, and I am grateful for the tireless efforts of my fellow committee members. Mine may be the face you see every week but it is the rest of the committee who do the work that makes having a newsletter worthwhile.

I may not be here for another two hundred issues, but I am certain that Atheist Ireland will go from strength to strength and I am glad that I have been able to play some small part in that.

Submission to Department of Justice

You can read the full edition online here.

“A unique feature of our model is the common belief-nurturing programme that encourages pupils to engage with their families and belief communities to learn more about their own faith or secular beliefs. What is considered a private aspect of the child’s life in some school types, is brought into the public space in a community national school.”

Here we have a statement that not only describes how the human rights of five year old children are being abused, but boasts about this abuse. Human rights courts have already established that if a person does not wish divulge their religious beliefs, that they should not be forced to do so by public bodies. The human right to privacy includes the right to keep your religious beliefs private. Michael Moriarty is the most senior figure within the ETB sector and Instead of seeking to protect the human rights of children in his schools, he is bragging about abusing those rights.

This does not provide confidence in the ETB sector as an attractive solution. This week, Atheist Ireland has written in detail about the right to privacy with regard to a person’s philosophical convictions and we will continue to campaign for other aspects of the ETB model to be brought into line with human rights standards. You can read more here.

Atheist Ireland at the March for Choice

You can read the full edition online here.

With children returning to school, remember that you have the right, under the Constitution and the Education Act, for your child to attend any school without attending religion class or any other class that is contrary to your conscience.

State-run ETB schools, along with TUI and the Department of Education, are trying to undermine this right by re-defining the Constitutional meanings of religious instruction, formation and education as defined by the Supreme Court in 1998.

But they cannot remove this right. You can download sample letters to your school about this on our Teach Don’t Preach website. Please contact Atheist Ireland if you have any problem opting your child out of religion class.

Why is the State teaching moral education for all students through religion?

Buy our book — “Is My Family Odd About Gods?”