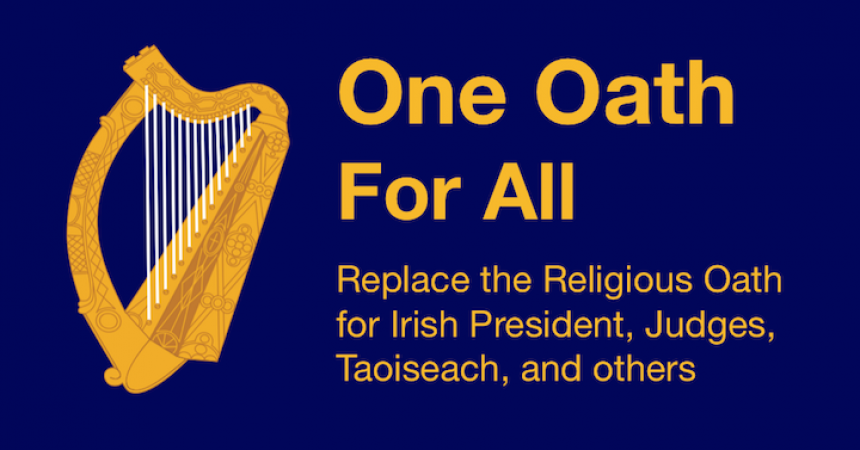 The Irish Constitution requires the President to take a religious oath in order to take office.

In a recent interview with BBC Radio Ulster the President of Ireland, Michael D. Higgins said that, in a new Ireland, “one should just affirm” (that is, make a secular affirmation instead of a religious oath).

This is the first time that an Irish President has supported the removal of the Constitutional requirement for Presidents to take a religious oath in order to take office.

This obligatory oath undermines the right to freedom of religion and belief. It is religious discrimination and bars conscientious atheists from taking high office in Ireland.

Here is the segment on religious oaths.

William Crawley
“People can believe what they like but when you became President of Ireland you had to take an oath in the name of the trinity.”

William Crawley
Do you think in a new Ireland that’s a problem.

President Higgins
Yes, I think that one should just affirm, I agree with you, that’s one of the changes. There are many many changes.

William Crawley
That should go?

President Higgins
Yes, I do.

William Crawley
How do you expect a Muslim for example, who might be president of Ireland, couldn’t take the oath right.

President Higgins
Well, then again as well as that I would also think that if a member of the royal family in Britain wanted to become a catholic they shouldn’t interfere with their vocational aspirations either.”

Atheist Ireland runs the One Oath for All campaign. You can find information on that here.

Category General, One Oath For All, Secularism Views 1307