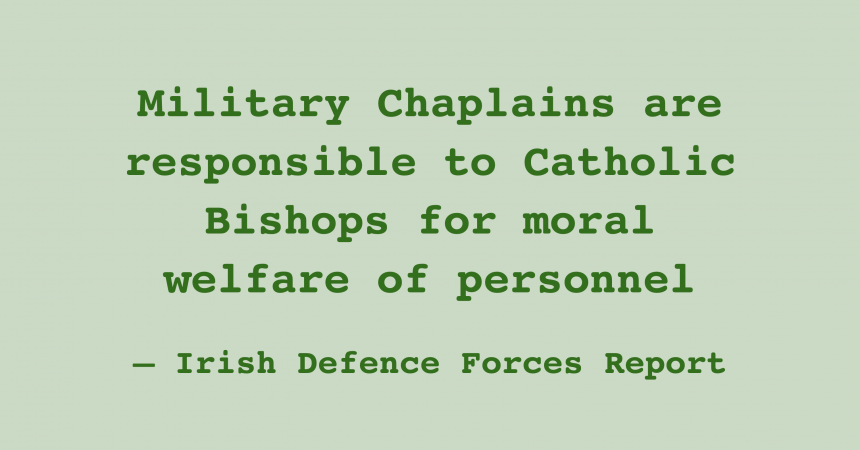 Last month Atheist Ireland, the Evangelical Alliance of Ireland, and the Ahmadiyya Muslim Community of Ireland, made a joint submission to the Public Consultation Commission on the Defence Forces. You can read that here.

We argued that Roman Catholicism is part of the culture of the Defence Forces, and that in particular the Defence Forces discriminate on religious grounds by failing to put the position of Chaplain out to tender.

We noted in that submission that we had sought details on the religious and nonreligious belief breakdown of Defence Force personnel and Chaplains, and a copy of the 2014 working group report called ‘Defence Forces Response to Religious Diversity.’ You can read this report here or at the end of this article.

We were advised to seek this under the Freedom of Information Act. We said that we would forward our analysis of that information when we obtained it, and we have now done so in the following supplemental submission.

Privilege for Religion over Atheism

The ‘Response to Religious Diversity’ report privileges religion over atheism.

Definitions of Religion and Belief

Everything in the document ‘Defence Forces Response to Religious Diversity’ flows from the definition that the Working group uses for the phrase ‘Religion and Belief.’.

“9. Religion is defined as belief in a god or gods with the notion of ‘bond between humans and gods.’ Belief (which includes non-belief) is defined as a feeling of certainty or acceptance that something exists, is true, or is good.”

“10. The defence Forces, Ireland, understands religion and belief as: A way of encountering God and/or awakening to spiritual values which help find meaning and purpose in life.”

These may well be the understandings arrived at by a well-intentioned Working Group that included three religious Chaplains and five senior male officers, but they are not consistent with atheistic philosophical convictions, the Constitution, or human rights law.

Philosophically, atheists can find meaning and purpose in life without either ‘encountering God’ or ‘awakening to spiritual values.’ You cannot automatically apply principles that are typically valid for religious people to atheists.

Constitutionally, the document acknowledges that:

“2(e) In the context of Article 44.2.3, the courts have found that the ‘religious profession, belief or status’ mentioned also includes non-belief.”

Under human rights law, the Venice Commission has stated about religion and belief that:

“A common definitional mistake is to require that a belief in God be necessary for something to be considered a religion. The most obvious counterexamples are classical Buddhism, which is not theistic, and Hinduism (which is polytheistic)… To the extent that laws include definitions, the text should be reviewed carefully to ensure that they are not discriminatory or that they prejudice some religions or fundamental beliefs at the expense of others…

“International standards do not speak of religion in an isolated sense, but of ‘religion or belief.’ The ‘belief’ aspect typically pertains to deeply held conscientious beliefs that are fundamental about the human condition and the world. Thus atheism and agnosticism, for example, are generally held to be equally entitled to protection to religious beliefs. It is very common for legislation not to protect adequately (or to not refer at all) to rights of non-believers. Although not all beliefs are entitled to equal protection, legislation should be reviewed for discrimination against non-believers.”

Application of these definitions

Here are sample statements in the document that are mostly accurate but selective:

“6. The various religious traditions have important moral resources that can contribute to the health and ethical vitality of civil society.”

“6. Religious insights have much to contribute and religion for many soldiers plays a significant and legitimate role in their moral formation and consequent leadership abilities.”

“7. For young soldiers, religion can offer a moral compass and opportunity for moral formation.”

“7. A moral and spiritual framework is vital to create the sort of ethos the Defence Forces want — an ethos grounded in values of loyalty, duty, dignity, respect, integrity, and honour.”

The first three statements are equally true about atheistic philosophical convictions. The final statement is simply not true. A “spiritual framework” is not vital to create an ethos grounded in values of loyalty, duty, dignity, respect, integrity, and honour.

There is also an inappropriate ideological attack on secularism, with reference to economic theories which have nothing to do with either secularism or the role of the Defence Forces:

“6. Secularism can be informed by a wholesome humanism, but there is always the danger of an empty secularism falling prey to corrosive influences such as dominant market and commercial interests or pernicious ideologies.”

In the context of the document, the clear implication is that these ‘pernicious ideologies’ are deemed to be nonreligious in nature. But pernicious ideologies can equally be grounded in religious beliefs, as is clear from the many places around the world where the Defence Forces serve, and also in Ireland with its many religious scandals.

Privilege for Catholicism over Other Religions

The ‘Response to Religious Diversity’ report privileges Roman Catholicism over Other Religions.

“20(b) With regards their duties, members of the Chaplaincy Service are responsible to the Bishop of their Dioceses and Provincials of their Orders, for religious ministrations to and the promotion of the spiritual and moral welfare of all members of the Defence Forces under their spiritual care. Consistently with the duties of their sacred office, they shall also cooperate with the Head Chaplain and the Commanding Officer in promoting the social and recreational welfare of such personnel. The duties are therefore seen as both Sacramental and Pastoral.”

This means that almost all Chaplains, and all of the full-time Chaplains, are responsible to a Roman Catholic Bishop for the promotion of the spiritual and moral welfare of all members of the Defence Forces under their spiritual care, while merely cooperating with the Commanding Officer.

Does this mean that Roman Catholic Chaplains are responsible for the spiritual and moral welfare of Evangelicals, Ahmadi Muslims, and members of other religious minorities in the Defence Forces? Or does it mean that only Roman Catholic personnel have this religious privilege? Neither of these options is satisfactory.

Ceremonial and other Catholic Privileges

As two examples, the document states:

“22. The presentation of Regimental Colours includes a religious blessing by a Chaplain and the laying up ceremony which includes celebration of a Mass… It is essential that such customs and traditions are recognised and such events should continue. In taking such a decision the contribution made to such units by members of other faiths should be recognised.”

Why is it essential that such customs and events should continue? Why should Catholic personnel have the privilege of a Mass while members of other religions merely have their contributions to the unit recognised? Why not simply recognise the contributions of personnel of all religions and beliefs on an equal basis?

“21(b) Many of the assumptions in the wording of regulations are that ceremonials and funerals will be in a Christian context and particularly the Catholic tradition… The Admin Instr. outlines a number of specific Catholic events where ceremonial honours will be preferred. The list should be re-examined and the Admin Instr. amended to ensure that other religious events are included to cater for all faiths.”

What does this mean in practice? It is simply not feasible for the Defence Forces to run religious events in accordance with the rites of every religious denomination which the various personnel affiliate with, so it cannot mean that. Or do the Catholics get their own events and there are other events at which member of all other faiths can attend? Why would the Defence Forces want to segregate their personnel in this way on the basis of their religion or belief?

As a final point, the document states that it should be reviewed within five years. Has this been done? If so what was the outcome?

We ask the Consultation Commission to take into account this information that we have received since the closing date for submissions, because we were advised that we would have to seek it under the Freedom of Information Act.