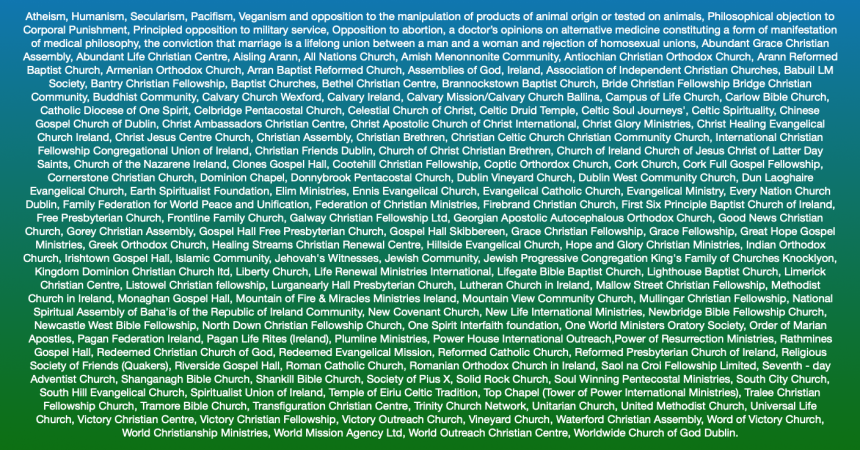 The right to freedom of conscience, religion and belief is one of the foundations of a democratic society. We have listed in this article over 150 religions that are recognised in Ireland, and ten nonreligious philosophical convictions that Human Rights law gives the same status as religious beliefs.

The Council of Europe in its Handbook of Freedom of expression stated that:

RTE Guidelines oblige its programmers to respect beliefs. This does not set a fair balance between the competing interests of the individual who complains and of the community as a whole.

Given Irish history and culture, the obligation to respect religious beliefs comes from a time when  Church and state were inseparable, and religious beliefs were reflected in our Constitution, laws and policy. They still are in many respects, especially in our education system.

The requirement to respect certain religious beliefs has political consequences. Religions seek to influence law and policy to ensure that their particular deeply held convictions are reflected in law and policy for everyone, even if you do not belong to that particular religion.

Political beliefs such as support for capitalism, socialism or nationalism are deeply held convictions held by many people. But RTE does not seek to ensure that political satire does not cause offence. Everyone can understand how such a policy would undermine freedom of expression.

There is no right for anyone not to be offended, even if such criticism may be perceived by some as hurting their religious feelings. Satire is given special protection by the European Court.

RTE should not have guidelines that require programmers to respect beliefs, as this undermines freedom of conscience and expression. It is impossible for any organisation to equally respect every belief in the country.

All beliefs should be challenged, and especially if they are harmful. Many aspects of Irish culture reflected Catholic Church teaching and were and are harmful to certain sections of society.

Catholic beliefs and other religious beliefs

It is the policy of the Catholic Church to evangelise culture. That is what Irish Catholicism has historically done. It is also the reason that RTE put in place such Guidelines. They are not based on pluralism and human rights, but on cultural Catholicism and an understanding that religious beliefs must be respected.

The requirement to respect beliefs and not cause undue offence is not as simple as it is made out to be. It might seem easy when you only deal with a couple of denominations of Christianity and a few minority faiths.

But if our National Broadcaster continues with this policy to respect beliefs, then they must also recognise the breadth of religions and beliefs in Ireland to ensure that they do not cause undue offence to any of them.

It is difficult to decide what is or is not ‘undue offence’ to any particular religion or belief as the various religious denominations can and do interpret and express their beliefs differently and so do beliefs/philosophical convictions that are not based on religion.

Also, the European Court has also afforded Article 9 protection to traditional practices which are objectively not part of the “core” precepts of an individual religion but which are heavily inspired by that religion and have deep cultural roots.

Atheist Ireland has put together the below list of religions and beliefs. The List of Religions comes mainly from the State Register of officially registered religious marriage solemnisers. We have calculated over 150 different religions and this is not a full list.

The nonreligious beliefs are recognised by the Council of Europe and the UN. Some of them may surprise you.  They are not all liberal beliefs.

The basis of the discussion is not around liberal nonreligious beliefs versus conservative religious beliefs. It is whether the National Broadcaster should respect beliefs and not cause ‘undue offence’ to each and every religion and belief in the country, and how that can be achieved.

There is no doubt that this path can only mean that the right to freedon of expression will be curtailed by RTE and people will not be challenged to reflect on their beliefs and culture.

We look forward to hear how RTE plans to engage with every religion and belief in the country to ensure that they do not give ‘undue offence’ to each particular sincerely held belief.

Atheism, Humanism, Secularism, Pacifism, Veganism and opposition to the manipulation of products of animal origin or tested on animals, Philosophical objection to Corporal Punishment, Principled opposition to military service, Opposition to abortion, a doctor’s opinions on alternative medicine constituting a form of manifestation of medical philosophy, and the conviction that marriage is a lifelong union between a man and a woman and rejection of homosexual unions.

Secular Sunday #472 - The Ghost of Ireland Past