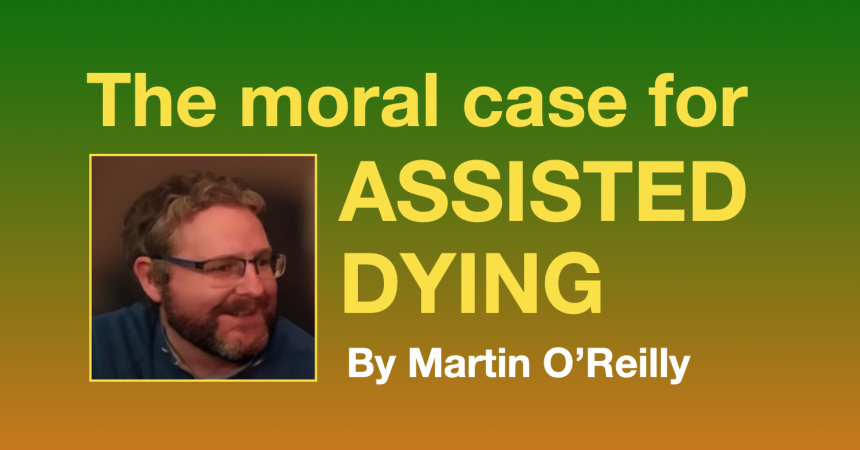 Martin O’Reilly of Atheist Ireland argues that assisted dying is a moral good. Linking to relevant sources, he examines religious objections, passive and active assisted dying, safeguards against pressure, the slippery slope argument, whether palliative care is enough, and the increased quality of life that assisted dying enables.

What is assisted dying?

The law should allow individuals who are suffering considerable pain due to a terminal or incurable illness – and where genuine informed consent is given – to have the choice to end their life on their own terms. Atheist Ireland is in favour of legislation, with robust safeguards (like the ones suggested in the Dying with Dignity Bill), to achieve this aim.

Objections usually come from those with religious beliefs. However, not everyone holds religious views or accepts that it is always wrong to assist someone to die. At the same time, opponents may be reluctant to say their opposition is directly connected to their faith – as it would seem to undermine the claim that someone doesn’t need to be religious to oppose voluntary assisted dying. More importantly, though, particular theological beliefs should not be used as the basis for laws which have a bearing on people with different faiths and none at all.

Most people don’t actually think human life should be preserved at all costs. At present, we allow patients the option of abstaining from potentially life-prolonging treatments, and doctors often withhold or withdraw treatments that could keep patients alive for longer. We don’t normally deny individual autonomy in cases like this because it is assumed – implicitly or explicitly – that prolonging life is not always in the patient’s best interest.

This, essentially, is passive assisted dying. There is no intrinsic moral difference between its active and passive forms; doing nothing, after all, is also a deliberate choice. And, moreover, the outcome is the same in both instances. But why is one regarded as acceptable medical practice and the other a criminal offence?

One response is that active killing is usually regarded as worse than letting die. It is worse, for example, to push someone who cannot swim into deep waters than to simply watch her drown. This intuition makes sense, but, as the philosopher Helga Kuhse has pointed out, the comparison with voluntary assisted dying does not work, as the objective is not to harm, but to benefit, the individual.

If we accept that individuals can receive a benefit when life-sustaining treatment is withheld or withdrawn, then presumably they can also receive a benefit when voluntary assisted dying is made available. It seems to us that the latter, in many instances, would be morally superior course of action than the former.

Some accept the moral arguments in favour of voluntary assisted death, but nevertheless think it should not be legal as it could lead to a situation where individuals would feel pressured by their doctor or relatives to end their lives quickly in order to avoid being a burden. Yet we do not see convincing evidence of laws in other jurisdictions – such as the Netherlands, Belgium, Luxembourg, Switzerland, and the states of California and Oregon – being used to force patients to end their own lives against their will.

Interestingly, no legislature that has legalised voluntary assisted dying has later voted to repeal that law. If instances of abuse were really increasing at a noticeable rate, as some opponents of assistance in dying claim, surely there would be widespread calls to rescind those laws. In fact, levels of abuse – for instance, in cases of non-voluntary ending of life – are not any higher in jurisdictions where voluntary assisted suicide is permitted than in ones where it is banned, and often they are lower.

Is there a slippery slope?

Another fear is that, after legislation would be introduced, there would then be a push for further liberalisation of those laws – that is to say, extending the practice to include children and those who are not terminally ill. But in most jurisdictions where assisted dying has been legalised (with perhaps the exception of Belgium), not much has changed regarding what practices are permitted or who can access them. For good summaries, see below.

The US state of Oregon, for example, legalised assisted suicide over two decades ago and it has resisted any attempts to amend its laws. It seems clear to us there is good evidence that legislation can be introduced with effective safeguards in place. On balance, the fear of sliding down a slippery slope overestimates the risks involved [see here and here], and seriously underestimates the torment and suffering actually felt by terminally ill individuals.

One other common objection is that we don’t need to legalise assisted dying because high quality palliative care is sufficient. Relieving the pain of individuals and making them feel valued is very important, to be sure, and more should be spent on palliative care; but this objective is compatible with assistance in dying. Both can exist as end-of life planning choices.

Besides, palliative care may not always be the preferred choice of individuals – some people care about more than just the ability to control pain and suffering. Furthermore, if palliative care was really sufficient then nobody would wish for assistance in dying, and therefore laws against it would be pointless.

Indeed, a society where voluntary assisted dying is possible would be one containing less pain and suffering. In fact, it is often the case that patients who received assurances from doctors that they will assist them to die if their suffering becomes unbearable have an enhanced sense of well-being. Conversely, the thought of their lives becoming unnecessarily drawn out seems to add an extra sense of fear, dread, and anxiety. The mere availability of voluntary assisted dying can by itself bring solace without the practice having to be provided.

Taking all of the above into account, there is no sound reason why we should not allow citizens the right to access assisted dying.