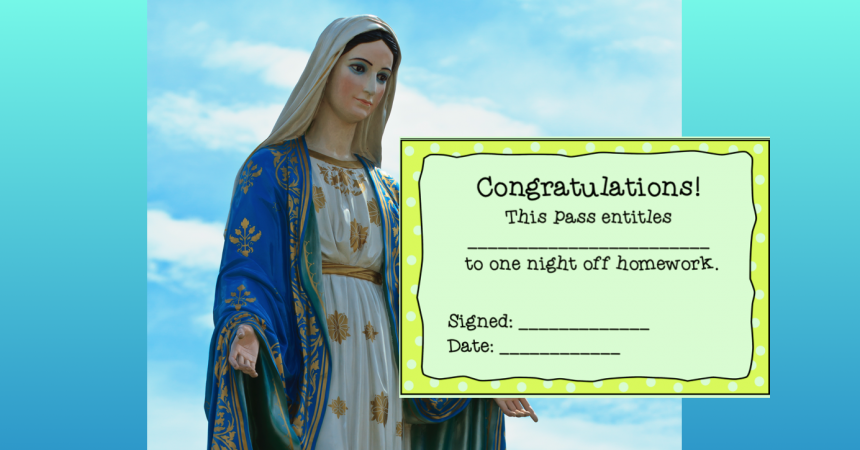 The Workplace Relations Commission has found that Yellow Furze National School in Meath discriminated on religious grounds against a family, in a case that Atheist Ireland raised publicly last September.

The school is under Catholic patronage, and it gave homework passes to children who attended Catholic religious services. But it refused to give the same pass to a child from an atheist family who was opted out of religion.

The parent who took the case said of the incident: “He came out of school crying. He told me the teacher had told the class that children who did not participate in the Communion choir would not receive a homework pass.”

An article by Carl O’Brien in the Irish Times today says:

The commission found there was clear evidence of discriminatory treatment under the Equal Status Acts towards the boy on grounds of religion.

It also found that the parents were deeply hurt and upset by the treatment of the school to the point they have removed their boy from school. It awarded them €5,000.

Atheist Ireland said the commission’s ruling was “an important win for the right to freedom of belief”.

“You have a constitutional right to attend any school without attending religious classes or ceremonies. This ruling shows that schools cannot get around that right by punishing children who don’t take part in religion,” said Jane Donnelly, human rights officer with Atheist Ireland.

“For years, schools just directly forced children into religious classes and ceremonies. When parents complained to Atheist Ireland about this, we have always succeeded in getting the schools to back down.

“Now schools are trying to make it harder to exercise your right to opt out of religion. They tell you to go to another school, or sit at the back of the religion class, or use rewards and punishments like this. That’s not what homework is for, and it’s not what religion is for.”

Parents, the Catholic church, and teachers

Parents have told Atheist Ireland that this type of discrimination takes place on a regular basis in schools with a Catholic ethos.

This is the first time that a parent has decided that enough is enough, and has taken a case to the Workplace Relations Commission. The outcome shows that inclusion, diversity and respect for minorities are not part of a Catholic ethos.

Whatever about the church, it is difficult to understand how teachers could treat a family in this manner. Teacher training colleges are clearly failing, as they have trained teachers to believe that this discriminatory behaviour is acceptable.  That is because the Catholic Church still has a lot of control and influence in teacher training colleges.

We hope that this is the end of this particular kind of religious discrimination. If you suffer similar discrimination in your school, please contact us at Atheist Ireland and we will assist you.