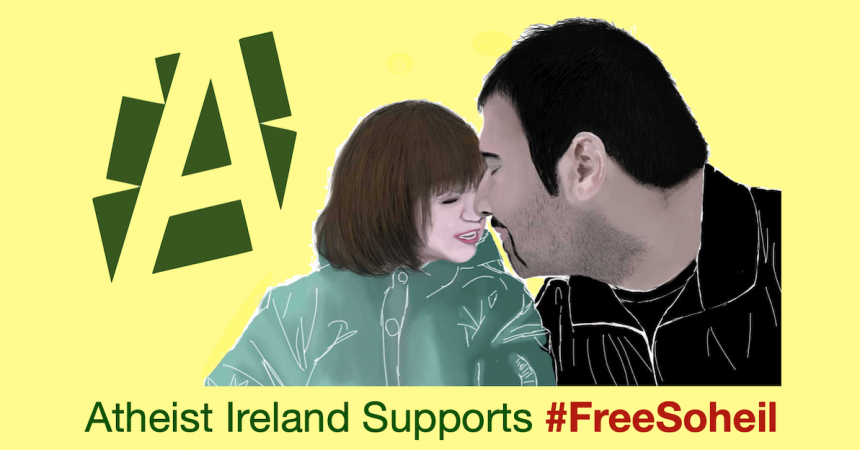 Some of us have our freedoms temporarily constrained in order to protect people from the Covid pandemic. We should consider ourselves lucky compared to Soheil Arabi.

Soheil is a 34-year-old Iranian blogger with a young daughter. He has been jailed and tortured since his arrest in 2013 for blasphemy after he criticised Islam on Facebook. He is on hunger strike in protest against his treatment.

Please also join the hundred thousand people who have signed this petition in support of Soheil.

Last year Ireland removed our law against blasphemy, after a ten-year campaign led by Atheist Ireland and other secularists and human rights campaigners around the world.

The Islamic States at the United Nations used to point to the Irish law as an example of a western democracy having a law against blasphemy. They wanted the wording of our law to be introduced around the world.

The Irish law against blasphemy is now gone. Islamic States can no longer use it to bolster their abuses of human rights against their own people.

Soheil was originally sentenced to death, which was revised on appeal to seven and a half years in prison plus thirty lashes and two years of religious studies as well as a two-year ban from travelling abroad.

He then had another three years added to his sentence, because of his brave open letters highlighting injustice and torture, inhumane prison conditions including the denial of medical care, and the unlawful holding of political prisoners in a ward with inmates convicted of violent crimes.

The Iranian regime has also harassed his family. Last year his mother was arrested for defending her son.

Soheil has a human right to freedom of thought, conscience, belief, and expression. He must be released immediately as must all political prisoners and those imprisoned because of their conscience and belief.

Protecting democracy from the undue influence of big money