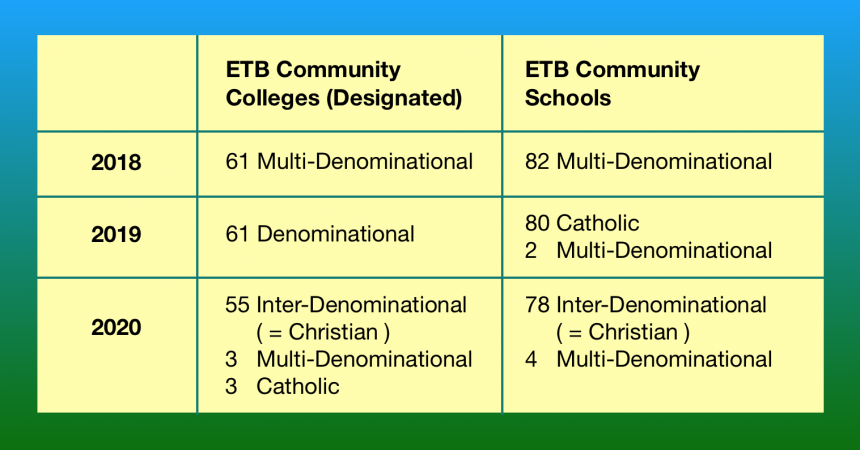 The Department of Education has told Atheist Ireland that the Minister for Education, Joe McHugh, gave incorrect information about the patronage of ETB schools, which we reported on in an article on 10 January. Minister McHugh was answering a parliamentary question on 6 December 2019 from Ruth Coppinger TD.

It is becoming impossible to keep up with the repeated changes in how the State officially describes the ethos of ETB schools. These schools are supposed to be the State-run alternative to the denominational, mostly Catholic, schools that dominate the education system.

But the official ethos of ETB schools and colleges keeps shifting between multi-denominational, denominational, Catholic, and now inter-denominational which means Christian. Meanwhile, in reality, Catholic practices are largely normalised within the life of these schools.

Figures from the Minister

Nor is any of this shifting categorisation consistent with an internal ETBI report, published by the Irish Times in October 2019, which vindicated what Atheist Ireland had been saying for years about the reality of the teaching of religion in ETB schools.

Nessa White, ETBI’s general secretary, acknowledged the difficulties the sector faced in defining what is meant by ‘multi-denominational’ in the ETB schools and colleges which have legal agreements with religious bodies.

But the internal ETBI report found that even in many of the 182 ‘non-designated’ ETB Community Colleges, which do not have any such legal agreements, Catholic practices are largely normalised within the life of the school. Many have graduation Masses, symbols from the Catholic faith only, and visits from Catholic religious representatives.

The Research “That’s how it works here‘: The place of religion in publicly managed second-level schools in Ireland (O. McCormack, J. O’Flaherty, B. O’Reilly, J. Liston)

The internal ETBI report cited McCormack et al (2108) questioning how the ETB sector can juxtapose ‘inclusion’ as a ‘core dimension of the characteristic spirit for non-designated schools, within a context where one religion is frequently given greater recognition than other (or no) religions.’

The McCormack et al report (‘That’s how it works here’: The place of religion in publicly managed second-level schools in Ireland) stated in its conclusions:

While the historical and cultural contexts can explain the reasoning for the largely normalised and unquestioned position of Catholic practices within the life of ETB schools, the religious and demographic contexts in Ireland are changing (O’Flaherty et al., 2018; Liddy et al., 2018; CSO, 2017b). Therefore, practices that were previously viewed as unproblematic now need to be questioned, challenged and changed. What this means for the place of religion in publicly managed schools is unclear. We would argue that non-designated schools being Catholic ‘by default’, without sufficient discussion, reflection and critique, is not acceptable within a more pluralist Ireland.

As public bodies, ETBs have responsibilities in respect of the ‘common good’. These include, for example, unifying a diverse population, preparing students to be citizens in a democratic society, and accepting and reflecting a variety of ‘worldviews, social customs and behaviours’ (Peifer, 2004, p. 2). Publicly managed schools have particular responsibilities in respect of the constitutional commitments to freedom of conscience (Article 44.2.1), non-discrimination on the grounds of religious belief or non-belief (Article 44.2.3) and protecting the right not to attend religious instruction at school. Much in the practice reported here is a potential source of concern in respect of these responsibilities.”

These are the current figures from the Department regarding patronage and ethos in Irish schools and colleges. 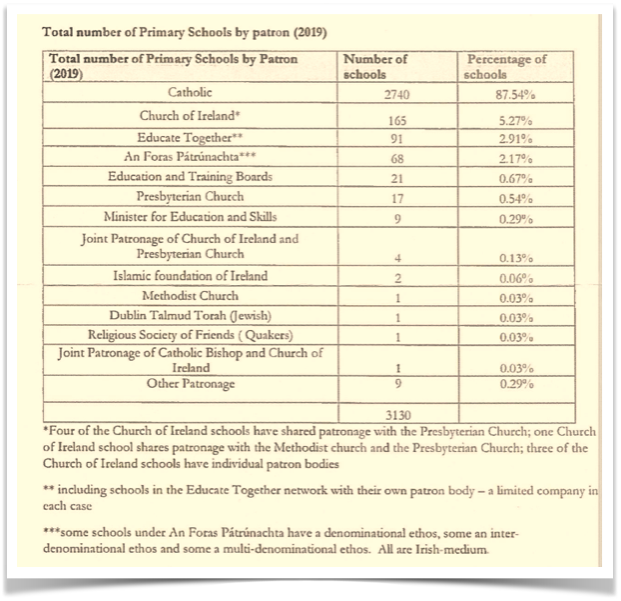 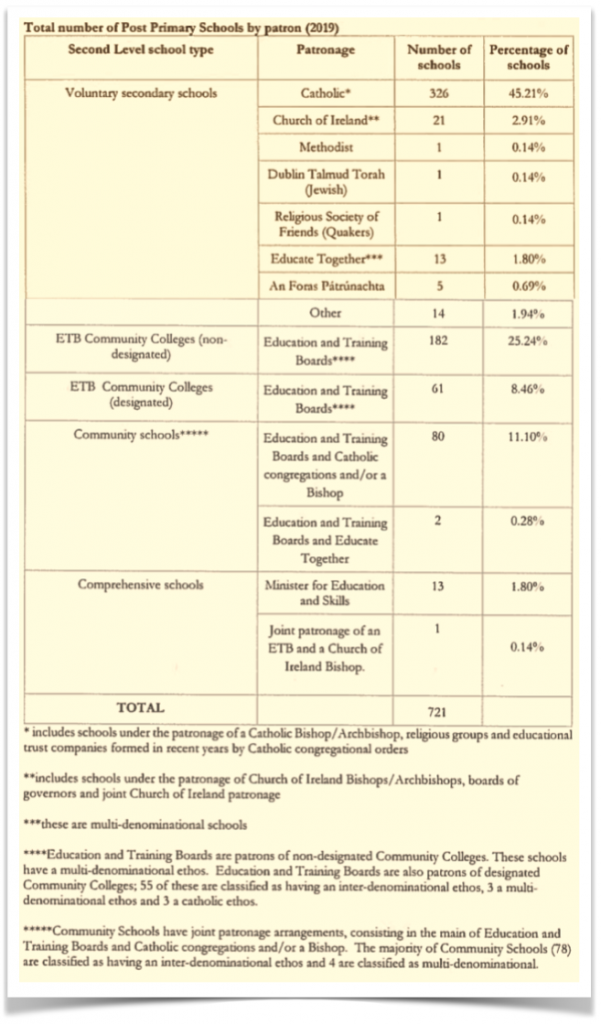