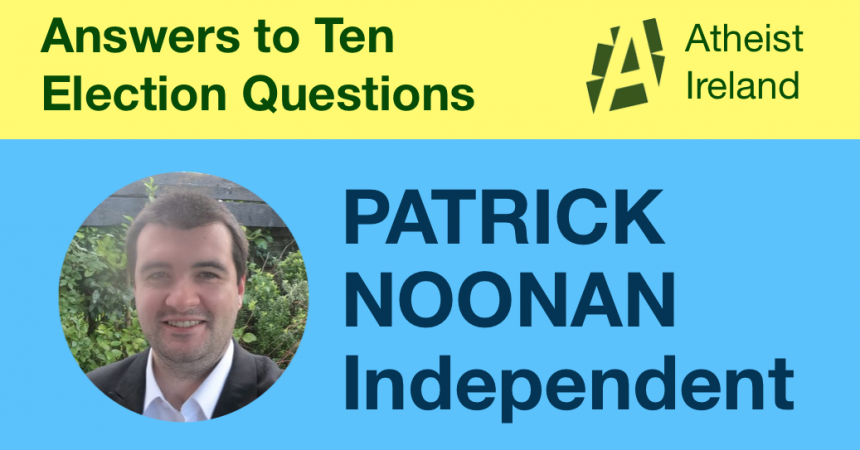 Atheist Ireland has asked political parties running in the General Election on 8th February to answer ten questions regarding secular issues. We have also got this response from Patrick Noonan, an independent candidate in Dublin Rathdown.

Patrick Noonan: Yes, I am proposing a referendum to update the constitution to remove any mention of god or higher beings, this would include updating any oaths. If this can be done through legislation then even better but if it requires a referendum I would push for that too.

Patrick Noonan: Yes, I am for full secularisation of all public institutions. If public money is involved then religion shouldn’t be.

Patrick Noonan: I would support this as an interim but I think the better solution is to replace any religious education in public schools with some form of philosophy/ethics. If parents want to educate their children on their religion then this should be done in their own private time not by a publicly paid school teacher.

Patrick Noonan: Similar to Q3, I would support this as an interim step but would rather no religious teaching occur in a publicly-funded school to begin with.

Patrick Noonan: If public money is involved then religion should be in no way involved. That’s why I am calling for full secularisation of Ireland. This would naturally be extended to healthcare too.

Patrick Noonan: Yes and Yes. An individual has full autonomy of their body. I also support the legalisation of euthanasia, with regulations. Doctors would not be compelled to perform the procedure if they are personally against it though.

Patrick Noonan: Yes, there should be no legal distinction. Either you are a solemnisers for marriages or you aren’t. However, I still think a religious institution should get to choose if a particular solemniser is appropriate for their institution.

Patrick Noonan: This one sounds a little a vague, I would need further clarifications before giving an opinion on it. For example, how are you proving ‘prejudice’ in each context?

Patrick Noonan: Yes, I am also calling for the removal of any tax exemptions from religious institutions. Any charitable work done by a religion should have to go through the standard charity regulations. Anything a religious institution does that’s not officially charity would be taxed as normal e.g. income tax, property tax. You can see my full secularisation plan here.

Secular Sunday #423 - One week to the election