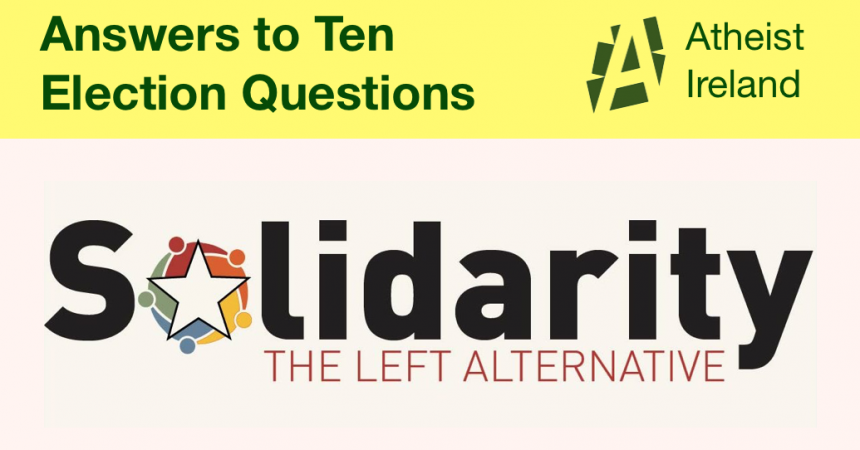 Atheist Ireland has asked political parties and candidates running in the General Election on 8th February to answer ten questions regarding secular issues. Here are the responses from Solidarity.

Solidarity: There should be no religious references in the constitution and no obligation for a religious-based oath for any office or taking part in court proceedings. Solidarity has introduced a Bill to make these amendments to the constitution and will reintroduce it in the next Dáil if elected. In the last Dáil our TDs strongly opposed the changes to the Dáil standing orders that obliged TDs to stand for prayer each morning if in the chamber.

Solidarity: Solidarity are in favour of a full separation of church and state. Religion is a personal freedom and should not advantage or disadvantage anyone accessing public services such as education. Solidarity introduced the Employment Equality (Amendment) Bill in 2015 to remove the exemption from employment equality legislation that religious ethos based schools had. There were changes made following this Bill, but the ability to discriminate on religious grounds remain. Solidarity introduced the Equal Participation in Schools Bill which would have ended religious grounds for school admissions and would have separated religion from the curriculum. Chaplains should not be funded by the State.

Solidarity: Yes, the right not to take part in religious teaching or worship is clear. There is no obligation on parents and pupils to give any reasons. There should be clear regulations applicable in all schools where opting out is straight forward and without question.

Solidarity: There’s a legal and constitutional right to opt out of any religious teaching in schools. However, there are no regulations to vindicate this right and make it a reality. Solidarity’s proposal in the Equal Participation in Schools Bill was to completely separate religion from the curriculum, for any religious teaching to be after core school hours and for the Minister to outline clear regulations on how the right not to participate will be vindicated in all schools. There should be alternative subjects available in all schools to religion, including an alternative to the NCCA Religious Education course. Our TDs strongly criticised the current government rowing back on basic reforms in this area in ETB schools.

Solidarity: Children and young people have a right to the best possible relationships and sex education regardless of what school they attend. The Education Act must change if a high-quality RSE curriculum is to be implemented as the law gives schools the ability to place ethos over curriculum and puts an obligation on the Minister and school boards to adhere to ethos. Solidarity introduced the Provision of Objective Sex Education Bill in 2018 to do this. Since it passed the second stage in the Dail, Leo Varadkar has refused to give it a ‘money message’ and effectively vetoed the Bill. If re-elected our TDs will restore this Bill and continue to press this vital issue.

Solidarity: Yes. Solidarity is for the full separation of church and state. There should be no ex-officio seats on any hospital boards for religious office holders, as is the case in the National Maternity Hospital. Religious orders should not be able to influence healthcare through ownership of land. Patients and medical professionals should make decisions based on human rights and clinical need. We also need a single-tier well-funded public health service where there are not waiting lists and ongoing crises.

Solidarity: Yes. A person who is capable of making a rational decision should be able to do so without legal risk to anyone assisting them in their choice.

Solidarity: Yes. Solidarity doesn’t think there should be restrictions on the freedoms of bodies that can nominate solemnisers simply because such a body is not religious based.

Solidarity: Yes. Funding of political parties and causes should be fully transparent and without interference from big business. Ireland has a long history of big business donations impacting on political decision making such as in planning. There should not be any differences in political spending regulation between religious and secular bodies. Engaging in political discourse and activity is a civil right that should not be curtailed by whether an organisation is secular or religious.

Secular Sunday #26 – Have Your Say