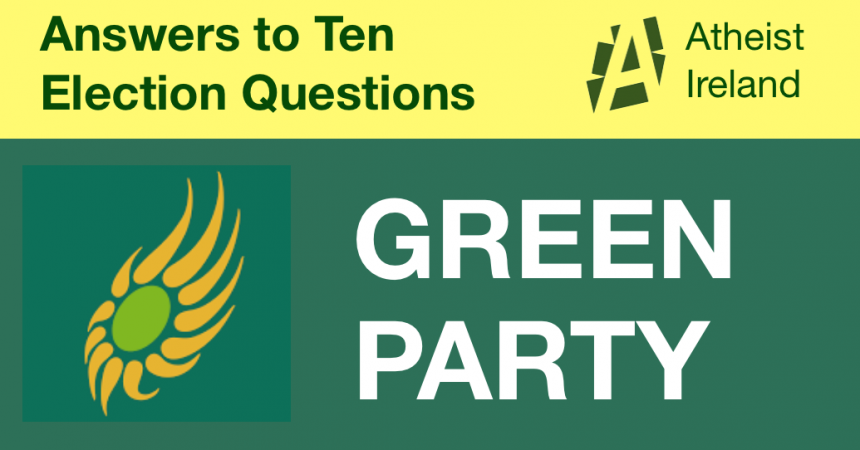 Atheist Ireland has asked political parties and candidates running in the General Election on 8th February to answer ten questions regarding secular issues. Here are the responses from the Green Party.

Green Party: The Green Party in general supports the rights of people of all faiths and none to receive full equal treatment in all aspects of their lives.

Green Party: The Green Party believes that schools receiving any state funding should be fair, transparent and inclusive in their policies and practices for entrance of students. We would end the practice where schools can discriminate against pupils in the admissions process on the basis of religion, or of special educational needs. We also would eliminate Section 37 (1) of the Education and Employment Equality Act 1998; eliminating this would end the exemption allowing schools to discriminate against teachers or other employees on the basis of religion.

Green Party: The Green party support keeping religious activities of schools to after (or before) the core school day. This may include simultaneous alternative extra-curricular classes, potentially including those from different religious groups, taking place alongside each other within the same school buildings.

Green Party: The Green Party views data protection as a fundamental right. Disclosure is a matter of individual consent, and we do not support compulsory revealing of data, including religious or philosophical beliefs. Furthermore, if this consent to this data is granted, we believe that management thereof would be at the behest of the individual, including the right to withdraw consent and have the data deleted at any time.

Green Party: The Green Party proposes to ensure that external RSE programmes are provided to educate students most in need. Additionally, we would ensure all teachers who undertake the teaching of SPHE are formally trained in an ongoing course reflective of the complex nature of the subject. We would ensure that teachers are fully prepared to provide the course in its entirety, including any and all sensitive topics included in the curriculum.

Green Party: The Green Party believes strongly in the principle of patient-centric healthcare, that is to say, universal healthcare, built around patient empowerment and preventative methods. This would be supported by information technology, accessed on the basis of medical need, and carried out in an economic, equitable and ecological manner.

Green Party: On palliative care and end of life: The Green Party believes that palliative care should be further expanded. All services – hospital, hospice, community hospitals, health clinics and care homes – should promote the knowledge and understanding of the process of dying and universal palliative care training should be required for all clinical, care and ancillary staff, appropriate to each staff member’s role. On assisted dying: The Green Party proposes that there should be a statutory right to an assisted death which would be distinguished in law from suicide, assisted suicide, and euthanasia. We believe that assisted dying provisions should apply only to those with a terminal illness which is likely to result in death within six months. As this is a complex and sensitive issue requiring many provisions and safeguards, we would advocate reading the full policy, which can be found here.

Green Party: The Green Party in general supports the rights of all people to full equality in matters of marriage, regardless of faith, gender, orientation or any other personal aspect.

Green Party: The Green Party supports the rights of all people to live lives free of prejudice or discrimination, and believes that both education and the law are vital tools in ensuring these rights are not infringed upon.

Green Party: The Green Party believes that all organisations spending over a certain threshold in relation to a specific campaign or general political activities should be regarded the same, i.e. a “third party” under SIPO rules. The party is also committed to ensuring that democracy is conducted in a free and fair manner with a level and transparent playing field, protected from undue or malign influences.