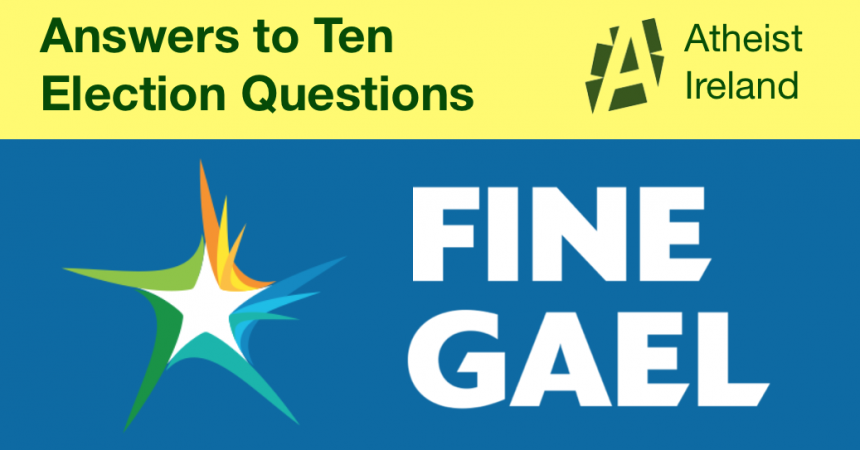 Atheist Ireland has asked political parties and candidates running in the General Election on 8th February to answer ten questions regarding secular issues. Here are the responses from Fine Gael.

Fine Gael: Our manifesto does not contain a commitment in relation to an oath. In line with our party’s values, we act in a way that is right for Ireland, regardless of dogma or ideology. For further details on our values see here.

Fine Gael: The content of the religious education programme and arrangements for faith formation and sacramental preparation in a primary school is determined by the patron of the school. At post-primary level, the Religious Education curriculum designed by the NCCA is an optional examinable subject at Junior and Leaving Certificate. Schools are not required to include the NCCA-developed Religious Education syllabuses at Junior or Senior Cycle as mandatory subjects on their curriculum.

Fine Gael: We will continue to uphold the rights of parents to have their children educated in a denominational school. We will protect minority faith schools.

Fine Gael: Fine Gael is committed to ensuring an RSE curriculum that is appropriate to the age and developmental stage of the children in our schools. It is important that we provide future generations with an understanding of the importance of consent, the development of relationships, safe use of the internet and a healthy positive attitude to sexuality.

Fine Gael: Fine Gael supports a publicly-funded healthcare system. The governance arrangements for the new National Maternity Hospital will be based on the provisions of the Mulvey Agreement. That Agreement provides for the establishment of a new company – National Maternity Hospital at Elm Park DAC- which will have clinical and operational, as well as financial and budgetary independence in the provision of maternity, gynaecology and neonatal services. The Agreement ensures that a full range of health services will be available at the new hospital without religious, ethnic or other distinction.

Fine Gael: Fine Gael has no intention of changing existing legislation in regard to the right to die.

Fine Gael: We have no existing plans to amend this legislation but we would be open to examining it.

Fine Gael: We have commenced consultation on our incitement to hatred legislation and, if returned to office, we will modernise our laws to ensure that those who seek to encourage and incite others to hate minority groups can be prosecuted. We will identify international best practice in prosecuting hate crime and legislate to create specific offences, to ensure that those who target victims because of their association with a particular identity characteristic, such as their sexual orientation or ethnicity, can be prosecuted.

Fine Gael: In November we announced legislative proposals which will obligate online paid-for political advertisement to be labelled as such and clearly display certain information, or a link to the information, in a clear and conspicuous manner. This proposal is as an interim measure until the establishment of a Statutory Electoral Commission which will oversee a wider reform of the electoral process.

Secular Sunday #543 – Adam the Ape and Our Goddamn Wedding