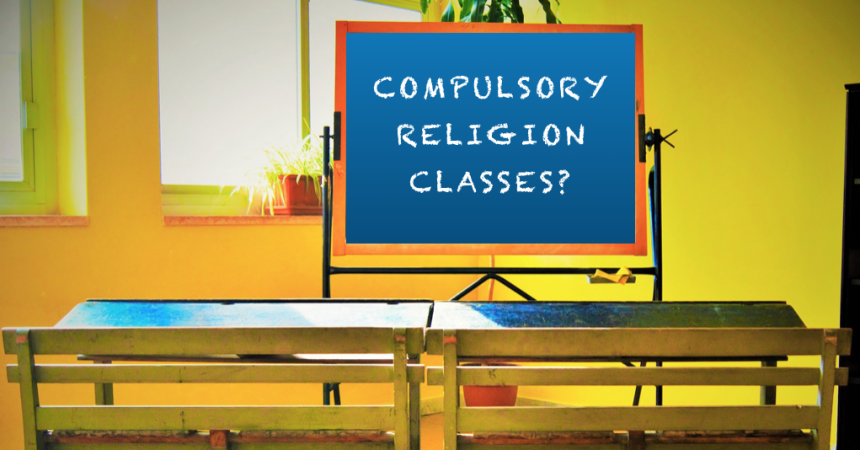 Religion should not, and can not, be made compulsory in Irish schools

Michael Nugent was on Newstalk Radio this week, debating whether religion should be made compulsory in Irish schools. Alan Whelan of the Catholic Secondary Schools Parents Partnership argued that it should be.

What is needed to better equip future citizens is not religious education but education about philosophical thought and ethics.

Religion may seem to be one type of philosophy. But it relies on faith, which is believing things disproportionately to the evidence, and that is the opposite of philosophy.

Ethics comes from evolved attributes like empathy, compassion, cooperation and reciprocity, and they are then made more nuanced through reason into fairness and justice.

Religion corrupts that natural sense of ethics, by adding in immoral commands that are claimed to come from the creator of the universe.

But more significantly, religion cannot be made compulsory in Irish schools, because it would be unconstitutional.

There is a Constitutional right (Article 44.2.4) to not attend any type of religious teaching in Irish schools.

Many teachers force students into religion classes, or schools say that the course is compulsory, but they have no right to do this. Neither have they any right to oblige students to attend any religious worship.

It does not matter what type of religion class it is, students have the Constitutional right to not attend. That includes the GMGY course in Community National Schools and the NCCA Religious Education course at second level.

Teachers do not recognise and protect this Constitutional right because they are not trained to do so. Teacher training colleges fail to teach their students basic Constitutional and human rights.

Students and parents can challenge this breach of Constitutional rights and many of them have done so and succeeded.

Atheist Ireland is moving the issue on by advocating for the right to get an alternative subject if you choose not to do religion. We will continue to campaign for the rights of students and parents in Irish schools.