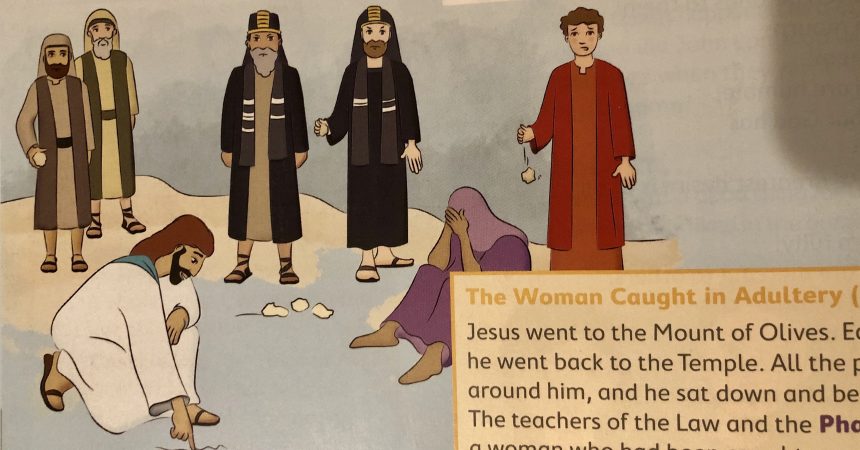 A lesson plan in the Catholic Grow in Love series, for sixth class students, has the students acting out the Bible story about “the woman caught in adultery.”

This will be taught in about 90% of State-funded primary schools in Ireland, and teachers who want a job in these schools must be prepared to teach this.

This story is a sexist and violent addition to original John 8, which is an antisemitic story in which Jesus tells Jews they are of their father the Devil.

The part about the woman caught in adultery was added to the Bible centuries later. In the original John 7-8, Jesus has an argument with the Jews in the Temple, who decide to stone him, so he hides and then runs away.

You can opt your child out of religion class, but in most cases they will still be left in the classroom and be influenced by this rhetoric.

The story is sexist

In the story, the Pharisees say that they caught the woman in “the very act of committing adultery.” If so, then they must have also caught the man she was having sex with.

So why did they bring only “the woman,” and not also the man, to be judged by Jesus? This is an example of the Bible portraying women who have sex as “fallen women” to be forgiven by a man, as long as she doesn’t sin again.

The lesson plan does not involve anybody questioning why it is only “the woman” who is being punished, and the man is nowhere to be seen.

“The woman” is entirely passive throughout the experience. The lesson plan says that: “The gathering crowd ready their ‘stones’ and the woman keeps her head hung and says nothing, as she awaits her fate.”

The story is violent

The story involves people gathering to stone a woman to death for having sex. The lesson plan has students acting out this violent desire, and trivialising it by using rolled up pieces of paper to represent rocks.

In the lesson plan, in the instructions for the students, “They made her stand before the group” has become “One of the (students in the play) handles the woman very roughly, before throwing her to the ground before Jesus.”

So the lesson plan is getting a student (presumably male, as he is playing a Pharisee) to handle a female classmate very roughly, and throw her to the ground. The students who are playing the crowd then shout “Let’s throw stones at her!” and “Stone her, stone her!”

The story is antisemitic

John 8 is one of several chapters in the Bible that give scriptural foundation to Christian anti-Semitism. In it, Jesus says to Jews who are talking about their God:

“Ye are of your father the devil, and the lusts of your father ye will do. He was a murderer from the beginning, and abode not in the truth, because there is no truth in him. When he speaketh a lie, he speaketh of his own: for he is a liar, and the father of it.” (John 8:44)

The story is a forgery

This story of the women caught in adultery was not even in the original version of John 7 and 8. It was added in centuries later.

In the original, or at least the most reliable versions of John 7 and 8, Jesus told the Jews in the Temple that whoever follows him will never walk in darkness, and that if they knew him they would also know his father. He told them that if they continue in his word, they will be his disciples, and they will know the truth, and the truth will set them free.

The Jews told Jesus that he was possessed by a demon, and asked him if he thought he was greater than Abraham. Jesus told them that before Abraham was, he is. The Jews then started to gather stones, in order to stone Jesus, but Jesus hid and then ran away.

Why was it added in centuries later?

The most likely reason is to create the impression that Jesus rejected the Mosaic law. But without this later addition, Jesus has a very different approach to the Mosaic law.

Secular Sunday #407 - The State should not endorse ‘miracles’