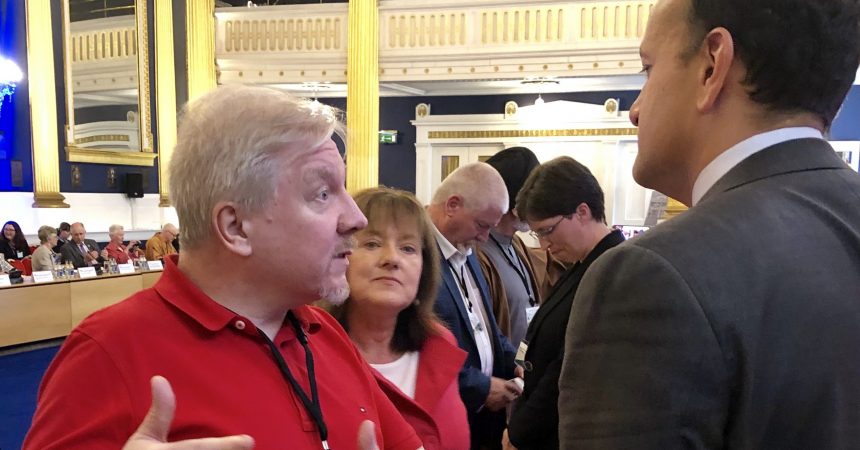 In July 2019 Atheist Ireland took part in a meeting of the Dialogue Process between the Government, Churches, and Non-Confessional Organisations in Ireland.

This page is part 3 of Atheist Ireland’s policy document submitted to the Irish Government as part of this process. The parts of the document are as follows:

Atheist Ireland promotes ethical secularism as the only way for a society to justly balance inclusive and diverse communities. By secularism we mean politically separating Church and State, in order to protect the pluralism of society.

We simply argue that the State in its exercise of its functions should remain neutral between religious and atheistic beliefs, and should not give privilege to or discriminate against any people or groups on the basis of their religious or nonreligious beliefs.

Everyone must have the right to freedom of religion and belief. But there must be one law for all, based on human rights and democratic values. And we as citizens should act ethically.

3.2 The Word ‘Ethical’ in Ethical Secularism

Atheist Ireland promotes not only secularism, but ethical secularism. In an ideal society, it would not be necessary for us to add the word ‘ethical’. But unfortunately, many people still believe that ethics and morality are determined by gods and interpreted through religions, and that atheists have no basis for behaving morally.

We believe that morality and ethics are products of our brains, part of the natural evolution of generations of living together as sentient beings. They are based on natural attributes of our brains such as empathy, compassion, cooperation, reciprocity, fairness, and justice.

John Rawls’ social contract theory of morality is based on the following question: How would a perfectly rational set of people design principles of justice for a society, if we don’t know in advance what position we would hold in that society? That is, we don’t know if we will be rich or poor, male or female, healthy or sick. This veil of ignorance forces us to be impartial, and to develop universally just principles.

On this basis, as a minimum, we should seek to minimise suffering and maximise flourishing of sentient beings, and to treat ourselves and other sentient beings fairly and justly. We do not need to invoke supernatural sources of ethics, and we should challenge such supernatural theories where they have the effect of causing injustice and unnecessary suffering.

While these agreements are not perfect, they provide the strongest approximation we have to a set of human rights that can be objectively monitored. And while the UN Human Rights Council is political in nature, the UN Human Rights Committees are composed of independent legal experts who regularly question every State about their human rights record.

Human rights are not lofty aspirations, but are the absolute rock bottom minimum standards that we should expect to have without even having to campaign for them. Human rights standards are the most difficult for opponents to argue against, because they are not merely our personal preferences, but minimum standards agreed by many States around the world.

3.4 We Promote Fair and Just Societies

As ethical atheists, we promote fair and just societies. We can each share this goal while having different specific ideas about how best to pursue it.

We build alliances with others who, like atheists, also face prejudice and social discrimination. We seek to identify and work together on specific issues of mutual interest, and support and empower each other.

We seek to objectively examine the impacts of social discrimination, and identify the best ways to promote fair and just societies, so that we can develop evidence-based arguments that can guide our ethical instincts.

We directly take positive actions to help others through community outreach projects, such as holding charitable events, helping existing charities, and supporting each other in times of illness and other problems.

3.5 Our Alliance with Evangelicals and Ahmadiyya Muslims

Atheists and religious people can both support secularism, and work together for secularism. Atheist Ireland already does this. We have a unique working alliance with Evangelical Alliance Ireland and the Ahmadiyya Muslim Community of Ireland to jointly promote secular schools.

Unlike interfaith forums, that bring together only religious people, our work brings together both atheist and religious groups. The key to our success is that we respect each other as people, we respect our right to hold our very different world views, and we accept that we disagree on the source and content of much of our world views.

But we can unite around our support for human rights and freedom from discrimination. We are all discriminated against in Irish schools and other situations. And we can promote ethical secularism while agreeing to differ on the source of our morality. These are the founding principles around which we organised in early 2016:

Our three groups do not confine our joint work to Ireland. When the UN Human Rights Committee was questioning Pakistan in 2017, we sent a joint delegation to Geneva to speak out for persecuted atheists, Christians, and Muslims who could not speak out for themselves.

3.6 Secularism Correlates With Many Aspects of a Just Society.

There is a pathway to secular values. The World Values Survey has been conducted by a team of interdisciplinary social scientists over recent decades. It suggests that, as individuals move from survival values to self-expression values, which is triggered by investments in health, education, communication technologies and democracy, societies move towards secular values.

Based on this research, the developed world is relentlessly becoming more secular, with some fundamentalists fighting a rearguard action against it. Ireland is following that trend. The sooner we attain a secular State, the easier it will be for religious and atheist citizens alike to work together to shape a just society that accommodates inclusive and diverse communities.

3.7 The People Have Moved On. The State Must Catch Up

We have had three recent referendums to respect individual rights to same sex marriage, abortion, and blasphemy. The State must now remove other legacy laws and practices that discriminate against atheists and people of minority faiths.

One way of testing whether a law respects everybody equally is to reverse it and see how just or unjust it seems. For example, would the following laws be just:

It should be clear that these laws and practices would be unjust. The reverse position, as it now stands, in which our laws give privilege to mostly majority belief religious people, and discriminate against atheists and people of minority faiths, is equally unjust.

Atheist Ireland gets Special Consultative Status at the United Nations