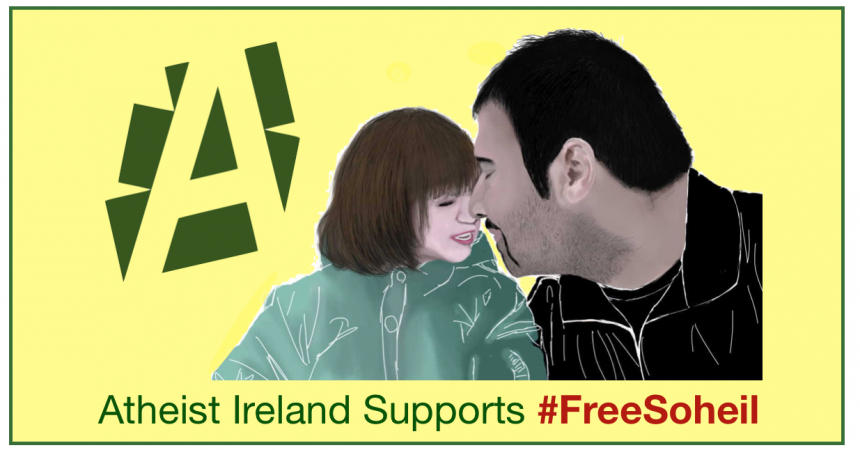 Soheil Arabi is a 33-year-old Iranian blogger with a young daughter. He has been jailed and tortured since his arrest in 2013 for criticising Islam on Facebook. He was originally sentenced to death, which was revised on appeal to seven and a half years in prison plus thirty lashes if he studied Islam. Last year he had another three years added to his sentence.

Soheil has repeatedly gone on hunger strike to protest against poor prison conditions, the unlawful holding of political prisoners in a ward with inmates convicted of violent crimes, the denial of medical care, and the harassment of his family by the Iranian regime. Last month his mother was arrested for defending her son.

Today, Saturday 17th August, Atheist Ireland joins human rights campaigners around the world who are calling for Soheil’s release. As the Atheist Republic website, which is coordinating the campaign, says:

“We demand that all democratic governments who are one way or another supporting the Iranian government, to stop doing so.  This regime has literally taken the people of a country as hostage, and tortures or issues capital punishment for expressing their opinions.

The question is why? Has anybody been executed in your country for a Facebook post? Has anyone been tortured for such a “crime”? Then why are you silent?

Why is there is no international consensus to condemn the trampling of basic human rights, and force the Islamic republic to stop this imprisonment and  torture, and to give the people their basic right of freedom of speech?”

You have rights, your beliefs do not: Michael Nugent’s speech to the OSCE human rights meeting in Poland