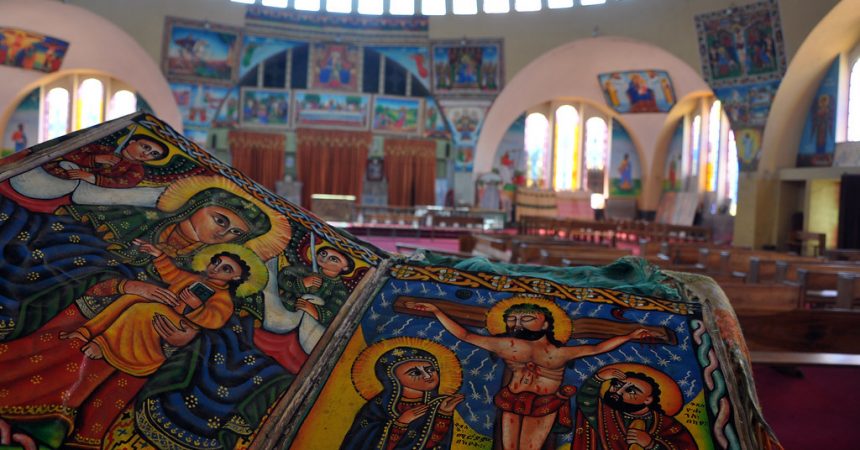 Taoiseach Leo Varadkar defended his visit to a male-only Ethiopian Orthodox monastery, while leaving the women members of the Irish delegation outside, by saying it was appropriate to respect the rules and customs of different cultures and religions in their country.

It is not just in Ethiopia that this Church discriminates against women. The Ethiopian Orthodox Church in Dublin says that women are prohibited from entering the church when they are menstruating.

We should, of course, respect religious people, and respect their right to hold beliefs that are different to our own. But that should not extend to insisting that we respect the content of the beliefs themselves, or their manifestation in practice.

Human Rights principles do not require that either adults or children should have to respect religious rules, customs, or codes of conduct. If they are unjust, harmful and promote discrimination, we should challenge them instead of respecting them.

The current situation in Ethiopia

Ahmed has also vowed to challenge prejudice against women, including by appointing Sahle-Work Zewde as Africa’s only female president and by allocating half of the government’s cabinet posts to women.

But women are still a long way from being treated equally in Ethiopia, a country with a majority conservative Christian (mostly Ethiopian Orthodox) population and a large minority Islamic population.

Also, homosexuality remains a crime, punishable by fifteen years in jail. The Ethiopian Orthodox church teaches that “the homosexual act” is a sin, immoral, an illness, repulsive, strictly forbidden and must be legally punished.

Last August the Ethiopian LBGT community wrote an open letter to Prime Minister Ahmed, asking him to make LGBT law reform one of the highest priorities in his quest for reformation of policies.

Democratic countries like Ireland should encourage Prime Minister Ahmed’s political reforms, and press for full human rights for all in Ethiopia, while also publicly challenging the many Ethiopian religious and cultural rules, traditions and customs that are unjust to women and LGBT people.

These issues will come into focus this year, as the United Nations will be questioning Ethiopia in 2019 about its human rights obligations under the Convention on the Elimination of All Forms of Discrimination against Women.

With regard to the human rights of women, Ahmed Shaheed, the UN Rapporteur on Freedom of Religion and Belief has pointed out that:

“41. Of significant note is the frequency at which States’ adherence to faith-based claims affect their capacity to protect the human rights of women. The voluminous religious-based reservations entered by States parties to the Convention on the Elimination of All Forms of Discrimination against Women are one case in point.

The breadth of impositions on women’s rights justified by States in the name of religion, including those which limit their full participation in political, social and economic life, perpetuate an environment that enables harmful practices against women and prevents society from achieving gender equality.

This includes the denial of access to reproductive health services and refusals to provide adequate legal and policy safeguards against domestic violence manifested in the form of marital rape and so-called “honour crimes”.

When the United Nations last examined Ethiopia under the Convention on the Elimination of All Forms of Discrimination against Women in 2011, the African Rights Monitor organisation said in its submission that:

“Deep-rooted patriarchal traditions persist in Ethiopia, as it remains the case that generally male power-holders, including religious leaders, define the norms of social conduct that limit the social space of women. In particular, religious leaders, Christians, Muslims and traditional believers, have power to define appropriate social behaviour and conduct, a capacity that, for instance, severely limits the social space of women in Ethiopia.”

The United Nations has told Ethiopia to protect women’s rights

After the United Nations examined Ethiopia under the Convention on the Elimination of All Forms of Discrimination against Women in 2011, it concluded:

“18. While noting the efforts made by the State party to eliminate discriminatory attitudes and harmful practices affecting women, the Committee reiterates its concern at the persistence of adverse cultural norms, practices and traditions as well as patriarchal attitudes and deep-rooted stereotypes regarding the roles, responsibilities and identities of women and men in all spheres of life.

The Committee is concerned that such customs and practices perpetuate discrimination against women, and are reflected in women’s disadvantageous and unequal status in many areas, including in public life and decision-making, economic life, sexual and reproductive health, and in marriage and family relations.

It notes that such stereotypes also contribute to the persistence of violence against women, as well as harmful practices including female genital mutilation, early marriage, the abduction of girls, and wife inheritance; and expresses its concern that the State party has not taken sufficient sustained and systematic action to modify or eliminate stereotypes and negative cultural values and harmful practices.”

The UN Committee urged Ethiopia to do the following:

“19 (a) Put in place, without delay, a comprehensive strategy to eliminate harmful practices and stereotypes that discriminate against women… including more concerted efforts, in collaboration with civil society, to educate and raise awareness, targeting women and men at all levels of society, and should involve community and religious leaders;

(b) Address harmful practices such as female genital mutilation, early marriage, marriage by abduction and wife inheritance by expanding public education programmes and by effectively enforcing the prohibition of such practices, in particular in rural areas;

(c) Use innovative measures to strengthen understanding of the equality of women and men, including their equal rights to participate in public life and decision-making, own land and livestock, freely make sexual and reproductive health choices and freely choose a spouse and enter into marriage, and continue to work with the media to enhance a positive and non-stereotypical portrayal of women.”

Religious leaders, and religious people generally, in Ethiopia have consistently opposed LGBT rights. The Pew Global Attitudes Project in 2007 concluded that 97% of Ethiopians believe that homosexuality is very harmful and that people who are engaged in such relationships should be punished.

The following year, nearly a dozen Ethiopian religious figures, including heads of the Orthodox, Roman Catholic and Protestant churches, urged lawmakers to amend the country’s constitution to ban homosexuality, which they termed as “the pinnacle of immorality.”

In 2012, a year after the UN human rights committee told Ethiopia to decriminalise homosexual relations, Ethiopian religious leaders put aside their differences to force the cancellation of a gay rights conference in Adis Adaba. They called the organisers of the conference “missionaries of evil”.

Abune Paulos, the former Patriarch of the Ethiopian Orthodox  Church, said that:-

Two years later the Ethiopian Council of Ministers proposed a new Bill to make it illegal to pardon a person who has been convicted of homosexuality. After protests from the international community, the Parliament dropped the Bill.

The United Nations has told Ethiopia to protect LGBT rights

After the United Nations examined Ethiopia under the International Covenant on Civil and Political Rights in 2011, it concluded:

“12. The Committee, is concerned about the criminalization of “homosexuality and other indecent acts”… such criminalization violates the rights to privacy and to protection against discrimination set out in the Covenant. The Committee’s concerns are not allayed by the information furnished by the State party that the provision in question is not applied in practice or by its statement that it is important to change mindsets before modifying the law in this regard.”

The UN Committee urged Ethiopia to do the following:

“The State party should take steps to decriminalize sexual relations between consenting adults of the same sex in order to bring its legislation into line with the Covenant. The State party should also take the necessary steps to put an end to the social stigmatization of homosexuality and send a clear message that it does not tolerate any form of harassment, discrimination or violence against persons based on their sexual orientation.”

The following are among the list of issues that the UN has sent to the Ethiopian government for this year’s questioning under the Convention on the Elimination of All Forms of Discrimination against Women:

“8. Please provide information on measures taken to increase the penalties for female genital mutilation, child marriage and abduction since their adoption in 2013… Please also describe measures taken to raise awareness of, prevent and eradicate polygamy and the practice of so-called “corrective rape”, to which lesbian and bisexual women reportedly fall victim.

9. Please inform the Committee about measures taken to criminalize marital rape, to exclude the applicability of extenuating circumstances in cases on domestic violence and to encourage women and girls to report acts of violence…

11. Please inform the Committee about the legal framework applicable to the trafficking of Ethiopian women within the country and abroad, and provide details on the provisions of the Proclamation for the Prevention and Suppression of Trafficking in Persons and Smuggling of Migrants…

12. Please inform the Committee about the prevalence of prostitution in the State party and on measures adopted to prevent the sexual exploitation of women and girls, with a special focus on internally displaced and rural women and girls…

13. Please provide information on awareness-raising among State officials with regard to the importance of the participation of women in the different branches of government..”

People have rights. Beliefs do not. The Taoiseach should have stood up for the rights of the women in the Irish delegation, and by extension the rights of all women in Ethiopia, instead of respecting religious rules and customs that discriminate against them.

Democratic countries like Ireland should encourage Prime Minister Ahmed’s political reforms, and press for full human rights for all in Ethiopia, while also publicly challenging the many Ethiopian religious and cultural rules and customs that are unjust to women and LGBT people.

We should highlight the argument of Ahmed Shaheed, the UN Rapporteur on Freedom of Religion and Belief, that States must not allow faith-based claims to affect their capacity to protect the human rights of women, and by extension, the rights of LGBT people.

Women’s rights and the rights of LGBT people, including the right to full participation in political, social and economic life, access to reproductive health services, and safeguards against domestic violence, must take precedence over the idea of giving ‘respect’ to unjust religious rules, traditions, customs, and codes of conduct.

“Church of Our Lady Mary of Zion, Axum” by Favila Roces is licensed under CC BY-NC 2.0

The Religious Test to be Ceann Comhairle