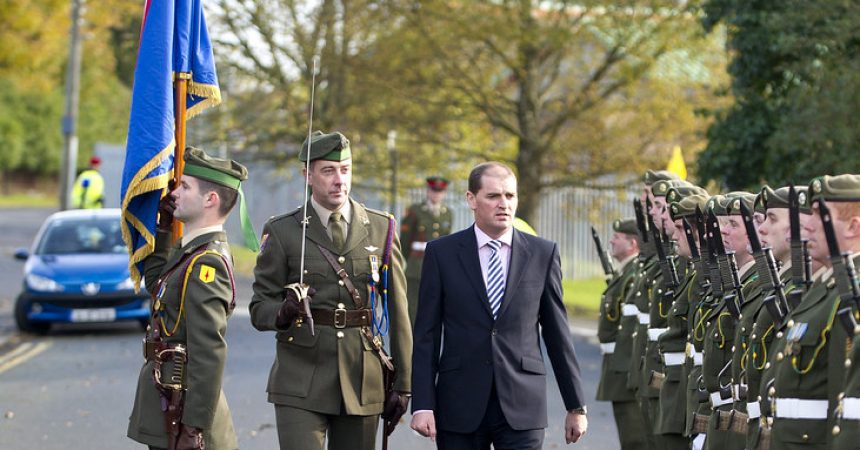 Atheist Ireland has written the letter below to Minister of State at the Department of Defence, Paul Kehoe TD.

Following some complaints that we have received from current and former members of the Irish Defence Forces, Atheist Ireland has recently completed processing a Freedom of Information request about Military Chaplains. We have acquired formal confirmation of what you’ll already be aware of, which is that Defence Force Regulation A3 Section 1, requires Chaplains to be appointed by bishops and approved by you as Minister. Previous statements in Dáil Éireann by your predecessors have indicated that there is one Church of Ireland Chaplain in the Irish Military, with all of the others being Roman Catholic priests. The Employment Equality Act stipulates that discrimination on the religion ground shall be taken to have occurred, where one person is treated less favourably than another because:

There are many non-religious chaplains working in Ireland. That publicly-funded chaplain positions are appointed by bishops, treats potential non-religious applicants less favourably. There is no reason why State- funded Chaplaincy positions should be appointed by bishops in secret, rather than open to applications from those of all faiths and none. Moreover, it is difficult to see how the allocation of publicly-funded salaries at the discretion of bishops, could be consistent with Article 44.2 of the Constitution.

The most recent census indicates that circa 10% of the Irish population is non-religious. This represents more than all of the other minority groups combined. It is reasonable to anticipate a commensurate proportion of non-religious members within the Irish Defence Forces. Since the current Defence Force Regulations obviate any possibility of a non-religious Irish Military Chaplain, members of the Defence Forces who lack religious belief are therefore treated less favourably. In this context, Atheist Ireland is also aware of anecdotal reports about mandatary religiosity within the Irish Defence Forces, and unfavourable treatment of those who seek to avoid religiosity during the course of their service.

It is often said that “there are no atheists in foxholes”, but this is simply not true. In fact, there are more atheists in foxholes than chaplains in foxholes. For example, Steven Hewett is an atheist and an Irish citizen, who has served in the U.S. Army. While deployed to Afghanistan, Staff Sergeant Hewett earned a Bronze Star, a Combat Action Badge and several other medals. Steven has given the following short statement to Atheist Ireland:

“I have proudly served alongside a diverse group of soldiers with a variety of different religious beliefs. Our military encompasses people from all walks of life, faiths and beliefs; from Christians, Jews, Buddhists, Muslims, Wiccans, Pagans … and yes even atheists who do not believe in any God. We serve our country and families not due to our religious belief but for the purpose of ensuring that our freedoms are not trampled upon by others. Yet the freedom to be given counsel within our military (whether it be spiritual or not) by a Chaplain of like mind, is denied to many of us by the very government that we would give our life to defend.”

Staff Sergeant Hewett served alongside Muslim and Christian soldiers when he was deployed. Whereas Christian soldiers had access to the counsel of a Chaplain, Muslim soldiers often did not, and Staff Sergeant Hewett did not as an atheist. Steven has since campaigned for religious equality for all minorities in the military, so that nobody is treated less favourably due to their religion. It is not acceptable for any government to send its military into harm’s way, while disrespecting the philosophical convictions of those in uniform. It should not be necessary for you to wait for litigation that will require you to change the current Defence Force Regulations, especially since legal complaints on this issue are already proceeding in other jurisdictions. Rather, we would urge you to immediately review these regulations in order to bring them into line with the Irish Defence Forces Equality Policy, with the Employment Equality Act, with the Irish Constitution and with Article 9 of the European Convention on Human Rights.

“took part in every deployment from Lebanon to Afghanistan. We organise the same activities for our military, veterans and their families as our Christian colleagues.”

Other Government Departments in Ireland have also already taken action to reform how publicly-funded Chaplains within their purview are appointed. Atheist Ireland has previously worked with the Department of Education and Skills on this topic. Our campaign resulted in the Higher Education Authority issuing the following instructions to all third level educational institutes in the country:

There is no reason why the Department of Defence should have a lesser commitment to human rights or to the Irish Constitution than any other Department. Moreover, it would be absolutely unacceptable to suggest that non-Christian members of the Defence Forces can be treated with equality, by offering them access to counsel from a Christian votary appointed by a bishop. Such a position would be a clear abuse of human rights and inconsistent with Article 44.3 of the Irish Constitution. Serving members of our Defence Forces are entitled to counsel from the best qualified person to provide it, and not merely the person preferred by a bishop.

It is understood that there may be occasions when members of the Defence Forces do not have the same freedom of movement as third level students, and that this may have implications for access to religious services. However, this makes it even more important to ensure that there is full equality within the Defence Forces, since travel to alternative services may be impossible at times. An analogous situation may be identified within the Irish Prison Service, which has previously recruited Chaplains using the Public Appointments Service. There is no reason why Irish Military Chaplains should not also be selected by an open and fair process, which can ensure that the superior candidate is appointed, based on established best practice in the public sector.

At the time of writing, the Irish Defence Forces are advertising an open and transparent recruitment process for medical doctors, which is designed to select the best candidate, who can offer the best medical care to those currently serving in the Irish Military. Why must the Defence Forces Regulations stipulate that those who will provide pastoral or spiritual counsel, must instead be appointed at the discretion of a bishop, rather than through a similarly open and transparent process designed to select the best candidate?