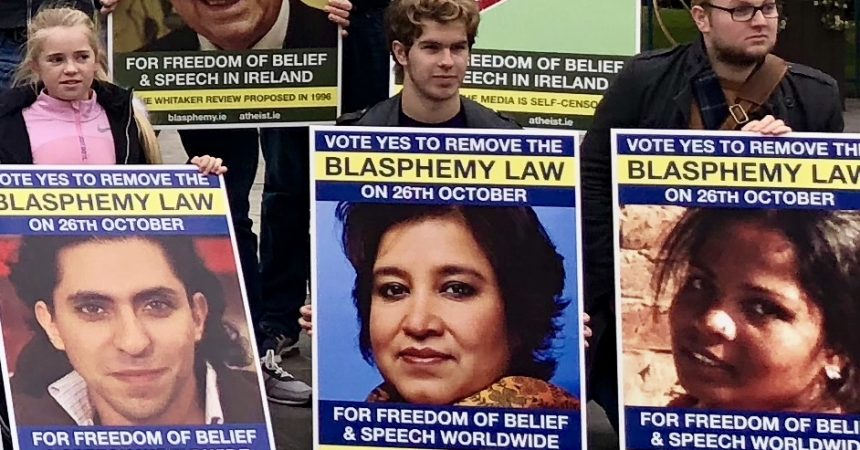 One of the arguments that Atheist Ireland has made, in support of removing the Irish blasphemy law, is that repressive regimes have used our law to politically justify their use of blasphemy laws, and to attempt to spread blasphemy laws around the world.

Here is the most significant example of this in action, in which the 56-State Organisation of Islamic Cooperation at the United Nations, led by Pakistan as their spokesperson, proposed that all United Nations States should adopt the wording of Ireland’s blasphemy law.

This is a link to the Report of that Committee, on 21st January 2010, to the thirteenth session of the Human Rights Council.

The Report notes that Pakistan, on behalf of the Organisation of Islamic Cooperation, made the following proposal:

“38.1 States parties shall prohibit by law the uttering of matters that are grossly abusive or insulting in relation to matters held sacred by any religion thereby causing outrage among a substantial number of the adherents to that religion.”

The Islamic States took this wording directly from the definition of blasphemy in the newly-passed Irish blasphemy law.

Professor Heiner Bielefeldt, the then United Nations Special Rapporteur on Freedom of Religion, advised Atheist Ireland as we prepared our submission to the Irish Constitutional Convention:

“Those countries that continue to have an intimidating anti-blasphemy practice like to quote European countries to unmask Western hypocrisy. So I hope things will be moving in the right direction.”

Other proposals at that United Nations session

In the same United Nations Report, Ireland supported several proposals submitted by the United States, including:

“33.2 Member States are called upon to review existing national laws to ensure that protections against racial and religious discrimination comply with their obligations under international human rights law.”

Responding to this Report, the United Kingdom’s National Secular Society published an article titled ‘Irish blasphemy law being used as a lever by Islamic countries’

“The reliance by representatives of Pakistan on the Irish legislation shows that the Irish law has provided an extremely dangerous international precedent. Sweden, on behalf of the European Union, responded to Pakistan’s submission to the Ad Hoc Committee specifically opposing defamation of religions as a human rights concept. It is ironic that the text to which the European Union is opposed is extracted directly from the law of a Member State.”

In March 2010, the Pakistan newspaper Dawn published an article titled ‘Partners in Blasphemy’ which was republished by the Ahmadiyya Times titled ‘Pakistan: Partners in blasphemy — a case of strange bedfellows.’

“But it seems that Minister Ahern did not realise the worldwide ripple effect that was to be prompted by a small piece of legislation in a small western democracy. The law has been seized upon by groups from the extreme left to the extreme right of the political and religious spectrum across the globe.

The Organisation for Security and Co-operation in Europe (OSCE), a 56-nation regional security group, warned that the Irish blasphemy law could flout international standards on the freedom of speech and have a ‘chilling effect’ on the freedom of expression.

Yet, while the law was largely criticised and condemned in the West, other groups decided to hold up the Irish blasphemy law as an international model.

Religious groups in Pakistan are using the Irish law to spearhead the campaign, mentioned earlier in this article, for an international law against blasphemy. The OIC has borrowed word for word the text of the Irish legislation in their submission to the UN Ad Hoc Committee on the Elaboration of Complementary Standards calling for the adoption of a global principle against defamation.”

In May 2010, Reporters Without Borders published an article titled ‘Blasphemy laws – European Parliament asked to be consistent about blasphemy.’

“In a resolution adopted yesterday in Strasbourg, the European Parliament called on Pakistan to carry out a “thoroughgoing review” of its blasphemy laws because they were “open to misuse.” It also condemned the “contradiction” between the Pakistani government’s commitment to religious freedom and its “leading role” in the Organisation of the Islamic Conference in seeking the UN’s condemnation of “defamation of religion.”

We welcome this initiative by the European Parliament and the legitimacy of its requests to Pakistan. But we draw the Parliament’s attention to the need to review European legislation on this subject at the same time. It is not very coherent to ask another country to carry out a thorough review of its blasphemy laws while continuing to accept the existence of a law in Ireland that criminalises blasphemy and makes it punishable by fines of up to 25,000 euros.

Even if they are rarely applied, their existence constitutes a restriction on freedom of expression that is incompatible with European democratic standards. It is vital that MEPs press with the same firmness for European legislation to be rid of these laws for good. The Parliament’s resolutions on this subject would then carry much more weight.”

More recently, in 2016, an African book titled ‘Global Perspectives on Europe: Critical spotlights from five continents’ included a chapter by Mauro Gatti of the University of Bologna, titled Normative or Hypocritical? Contradictions between the EU’s External promotion of Human Rights and Member States’ Policies.

“The European union sees itself as a global force for human rights, but there is the perception that its international statements are not always matched by internal policies… This paper suggest that EU states’ practice sometimes contradicts the values promoted throughout the rest of the world by the Union. This inconsistency may call into question the EU’s image as a distinctive international actor and jeopardise its effectiveness on the global scene.”

“In 2009, Pakistan submitted a proposal to the UN ad hoc committee on the elaboration of complementary standards, according to which states parties should have prohibited by law ‘the uttering of matters that are grossly abusive or insulting in relation to matters held sacred by any religion thereby causing outrage among a substantial number of the adherence to that religion’.

The EU was quite embarrassed by this proposal, since it reproduced almost to the letter part of the Defamation act 2009, which the Irish Parliament had approved only a few months earlier. In other words, a third State took advantage of European contradictions to unmask the EU’s hypocrisy, to legitimise its own position and to further its agenda.”

This year, the newly-elected Prime Minister of Pakistan, Imran Khan, has vowed to defend the country’s blasphemy law, which human rights groups routinely describe as one of the most abusive and discriminatory blasphemy laws in the world.

He has also pledged to revive efforts by member States of the Organisation of Islamic Cooperation to establish blasphemy as a crime under international law.

Last month an unprecedented international coalition of people, accused of blasphemy in their home countries, wrote an open letter calling on the people of Ireland to vote to remove our blasphemy law in next week’s referendum.

The 23 signatories come from across 12 countries, all of which have some variation of blasphemy law on statute. They are Bangladesh, Egypt, Greece, India, Indonesia, Iraq, Morocco, Nigeria, Pakistan, Palestine, Saudi Arabia, and Sudan.

This is just a small sample of the international impact that the Irish blasphemy law has had, both on Ireland’s reputation and on the lives of victims of blasphemy laws around the world.

It is not the only reason to remove our blasphemy law, but it is an important one.

Secular Sunday #355 - Only 12 days left until the Blasphemy Referendum