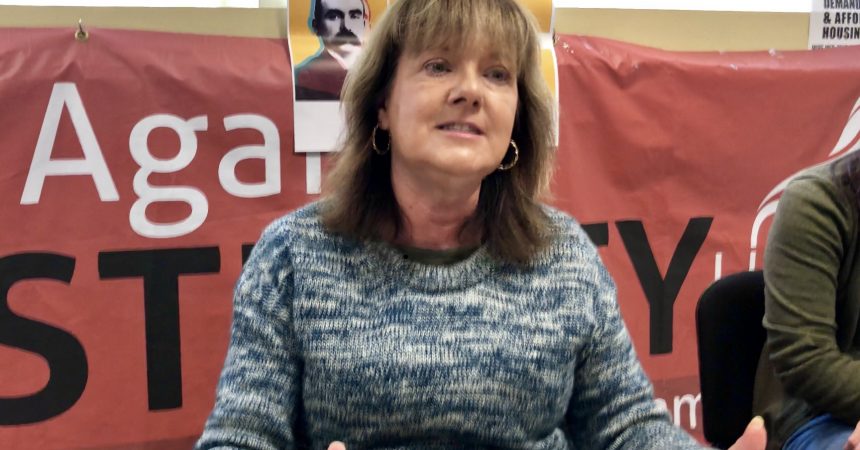 Jane Donnelly, Human Rights Officer of Atheist Ireland, made the following speech today at the Be The Change conference in Waterford, organised by Waterford People Before Profit, on Saturday 22 September 2018.

The Catholic Church no longer controls the Irish people. We have moved on. Now the State has to catch up. The State is slowly recognising this, with the recent referendums on marriage equality and abortion rights, and the coming referendum on the blasphemy law.

But we need to move further and faster than this. We need a secular constitution, secular parliament, secular government, secular schools, and secular healthcare.

When Atheist Ireland was founded ten years ago, atheism and secularism were seen as dirty words in Irish politics. Our first challenge was to normalise the use of these words in the Dail and in the media. This has now happened.

But normalising the language is only step one, and the limited legal changes so far are only step one and a half. On the same day that we will vote to remove the blasphemy law, we will vote in a Presidential election that excludes conscientious atheists, because of the religious oath.

Here are the legal changes that we need to bring about separation of church and state in Ireland.

Firstly, we need a secular constitution.

Secondly, we need a secular parliament.

Atheist Ireland campaigns for secular schools along with the Evangelical Alliance of Ireland and the Ahmadiyya Muslim Community of Ireland. We each have very different world views, but the essence of secularism is that, despite this, we can work together to separate church and state.

Together, we will soon be meeting the Department of Education to discuss the recent directive to ETB schools to give students an alternative timetabled subject to religion. The ETBs and the teachers unions are refusing to implement this directive, and by doing this they are breaching our constitutional and human rights.

Parents and students should not accept the excuses being made by the ETBs and the teachers unions. You can read why on our secular schools website, teachdontpreach.ie.

Despite Atheist Ireland’s criticism of the Department of Education and various Ministers for Education over the years, we believe that they are genuinely trying to change the culture of these ETB schools.

But we shouldn’t even have to fight this particular battle. The ETB schools are supposed to be the State-run alternative to denominational schools. The bigger battle remains, which is to remove the control of the Catholic Church over 90% of our primary schools.

And fifthly, we need secular healthcare.

As well as finalising the abortion legislation to reflect the last referendum result, we need to:

I want to end by highlighting the importance of campaigning for a Yes vote in the referendum on blasphemy on October 26th.

The Irish blasphemy law is harmful. In Ireland, it has caused media outlets to self-censor themselves. Globally, it has emboldened States with more authoritarian blasphemy laws, who have cited the Irish law at the UN to support theirs.

We agree with the many bodies that have called for repeal of the Irish blasphemy law, from the 1991 Law reform Commission, the 1996 Constitution Review Group, and the 2008 All-Party Committee on the Constitution, to the United Nations Human Rights Committee and the Council of Europe’s Venice Commission.

Many people think this referendum is an easy win, but complacency is a great way to lose a referendum. I’ll be happy to discuss our campaign on this issue with you later, and we hope we can all work together over the next five weeks to ensure a Yes vote.