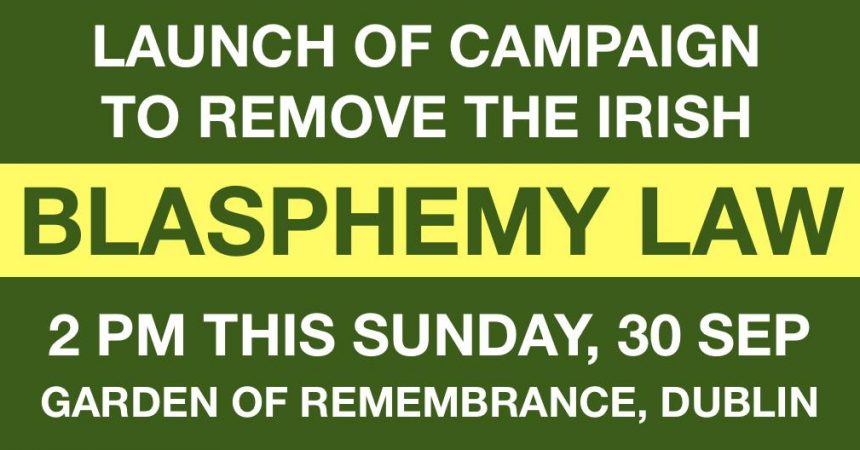 When:  Sunday the 30th of September – World Blasphemy Day at 2pm

Where: The Garden of Remembrance, Parnell Square, Dublin

Why: At 2pm this Sunday, 30th September, World Blasphemy Day, Atheist Ireland will officially launch a Campaign to Remove the Irish Blasphemy law, by voting Yes in the referendum on 26th October. Please come along to show your support.

The launch will be outside the garden of Remembrance in Parnell Square, Dublin. There will be a photoshoot with our campaign placards, a show of solidarity with victims of blasphemy laws around the world, and details of the campaign and how you can help.

Atheist Ireland has lobbied for a decade to get this referendum, both in Ireland and at the United Nations, Council of Europe, and OSCE. We are now looking forward to a busy month seeking public support to finally remove this harmful law.

We will be working with colleagues including the Ahmadiyya Muslim Community of Ireland, the International Humanist and Ethical Union, the International Campaign Against Blasphemy Laws, and in solidarity with victims of blasphemy laws globally.

Here are five reasons to Vote Yes on 26th October:

2. Vote Yes to allow Irish media outlets to deal objectively with religious issues, without having to self-censor themselves to avoid the possibility of a blasphemy case and a €25,000 fine.

3. Vote Yes to support Christians, Ahmadi Muslims, atheists and other minorities who face persecution in Islamist States. These States have cited the Irish law at the UN to justify theirs.

4. Vote Yes to remind ourselves, and show the world, how much Ireland has changed since 1937. We are now a modern pluralist State that respects freedom of religion, belief, and speech.

5. Vote Yes to agree with the many bodies that have called for removal of the Irish blasphemy law, including the 1991 Law Reform Commission, the 1996 Constitution Review Group, the 2008 All-Party Committee on the Constitution, the 2013 Constitutional Convention, the United Nations Human Rights Committee, and the Council of Europe’s Venice Commission.

We look forward to seeing you at 2pm this Sunday outside the garden of Remembrance in Parnell Square, Dublin.

Secular Sunday #353 - Launch of Campaign to Remove the Blasphemy Law

Secular Sunday #56 – This One Has Pictures