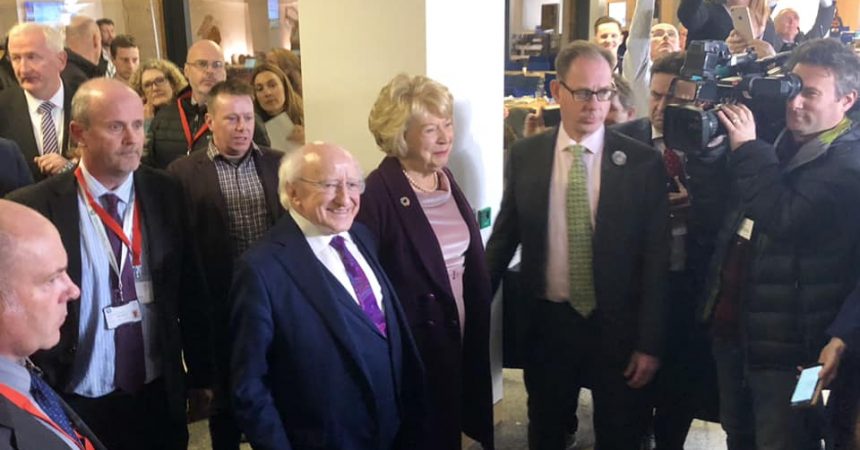 Yet again Ireland is to hold a Presidential election that excludes conscientious atheists as candidates, as in order to take office we would have to swear a religious oath that is in our Constitution. This would force us to dissemble about our beliefs, and breaches our human right to freedom of conscience and belief.

The oath that the new President must swear is:

“In the presence of Almighty God, I do solemnly and sincerely promise and declare that I will maintain the Constitution of Ireland and uphold its laws, that I will fulfil my duties faithfully and conscientiously in accordance with the Constitution and the law, and that I will dedicate my abilities to the service and welfare of the people of Ireland. May God direct and sustain me.”

If instead, in order to become President, the Constitution required that a winning candidate had to swear that there is no God, everybody would immediately realise that this would be a breach of their rights. But there is a blind spot when the discrimination is the other way around.

In 2014, after Atheist Ireland met with the UN Human Rights Committee in Geneva, the Committee told Ireland to remove religious oaths for public office and to remove the law against blasphemy. The Committee concluded:

Religious Oaths: The Human Rights Committee is concerned at the slow pace of progress in amending the Constitutional provisions that oblige individuals wishing to take up senior public office positions such as President, members of the Council of State and members of the judiciary to take religious oaths. Ireland should amend articles 12, 31 and 34 of the Constitution that require religious oaths to take up senior public office positions, taking into account the Committee’s general comment No. 22 (1993) concerning the right not to be compelled to reveal one’s thoughts or adherence to a religion or belief in public.

In 2013, six members of President Higgins’ Council of State asked the Constitutional Convention to call for the removal of the religious elements from the oaths that the Irish President, judges and Council of State members have to swear in order to take up office. They were Catherine McGuinness, Michael Farrell, Sally Mulready, Ruairi McKiernan, Deirdre Heenan, and Gerard Quinn, acting in their individual capacities.

They said that the issue came to their attention at the first meeting of the Council of State under President Higgins. At that meeting, Tanaiste Eamon Gilmore had to swear the religious oath, despite being publicly on record as saying that he does not believe in God. He said that he had taken legal advice and that he had a constitutional obligation to swear the oath. Atheist Ireland had raised this issue with the Tanaiste before this meeting.

What the Council of State members said

The Council of State members said that the oaths could exclude or cause embarrassment to atheists, agnostics and humanists. They could also be unacceptable to Quakers and other Christians who do not approve of religious oaths, and to members of some other non-Christian faiths.

They recalled that the United Nations Human Rights Committee – the treaty monitoring body that monitors implementation of the UN Covenant on Civil and Political Rights – has also expressed concern about the specifically religious oath for judges.

They said that Republican forms of government based on openness, tolerance, pluralism – with an expectation that public space is truly open – tend not to add a religious dimension to the relevant oath or declaration. It is enough to commit to Res Publicae.