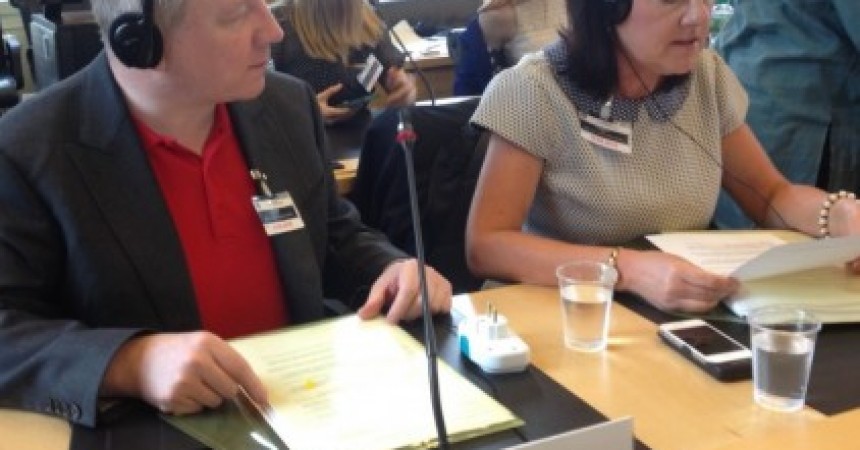 Last Friday, 2nd March, at the United Nations Human Rights Council in Geneva, the Holy See opposed the fundamental human right to freedom from religion, claiming that it is a patronising idea that goes beyond the mandate of UN’s special rapporteur on freedom of religion or belief.

The Holy See also argued that secularist ideologies, that promote ideas that are not in line with religious wisdom and the sentiments of the greatest part of humanity, will weaken the UN and lead to a state of irrelevance of the multilateral human rights system.

The Catholic Church repeatedly makes it clear, for those of us who listen to them, that they do not accept the right to freedom from religion. That is why they permeate school days with Catholic faith formation, and make it difficult or impossible to opt out of religion classes.

The right to opt out of religion, in all Irish schools, is not new. It is a constitutional right. But it has not been given practical effect, because the State has given control of most of our schools to an organisation that does not respect the constitutional and human right to freedom from religion.

The Right to Freedom From Religion

The Holy See is simply wrong when it claims that UN Human Rights treaties do not protect the right to freedom from religion. The UN Human Rights Committee General Comment No. 22, on Article 18 (Freedom of Thought, Conscience or Religion) clearly states:

“2. Article 18 protects theistic, non-theistic and atheistic beliefs, as well as the right not to profess any religion or belief. The terms “belief” and “religion” are to be broadly construed. Article 18 is not limited in its application to traditional religions or to religions and beliefs with institutional characteristics or practices analogous to those of traditional religions.

6. The Committee notes that public education that includes instruction in a particular religion or belief is inconsistent with article18.4 unless provision is made for non-discriminatory exemptions or alternatives that would accommodate the wishes of parents and guardians.”

The Holy See Speech at the UN

Here is the full speech by the Holy See’s Ivan Jurkovic:

“Many societies around the world adopt an attitude of rejection to religious freedom, marginalising and at times openly persecuting religious minorities, whether they are a traditional part of the social landscape or just recently established.

Laws and policies that discriminate against religious minorities are still all too present in our world. Some states forfeit their responsibility to protect their citizens belonging to religious minorities, inter alia by hindering access to justice or not ensuring fair trials in case of mob violence.

On the other hand, those states that permit and cultivate secularist ideologies, where subtle and sophisticated forms of prejudice and hostility towards believers and religious symbols are occurring.

Unfortunately, these reductive attitudes are at times perceived in some quarters of international organisations, when controversial notions that are not in line with international instruments, religious wisdom, and the sentiments of the greatest part of humanity are promoted, or even imposed.

Such a policy cannot but weaken this institution, leading to a state of irrelevance of the multilateral human rights system, which is already frequently criticised.

Of the utmost concern, the use of the term freedom from religion, which is not contemplated in the international instruments, reveals a patronising idea of religion, going beyond the mandate of the special rapporteur.

Once again, the Holy See reiterates, in the words of Pope Francis, that religion itself, the religious dimension, is not a subculture. It is part of the culture of every people, and every nation.”

You can watch the full session at this link.

The Holy See’s contribution begins at 33:15