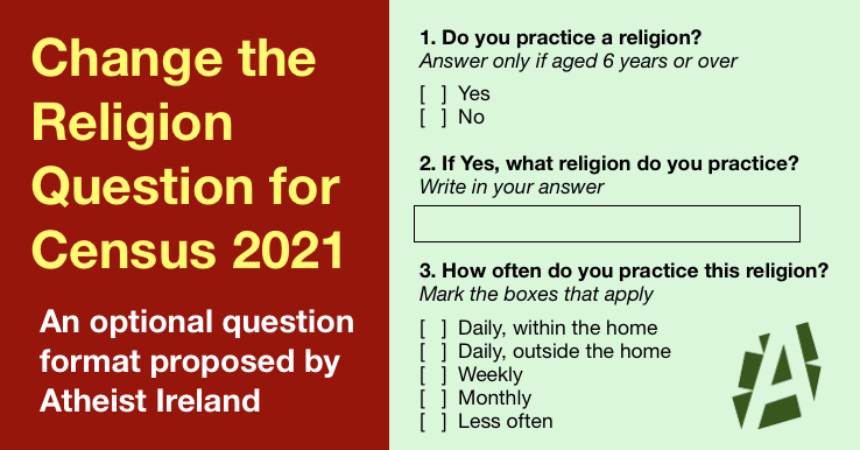 Atheist Ireland will be attending a meeting next Monday of the Census 2021 Advisory Group on the questions of Religion and Ethnicity. The meeting will take place in the Central Statistics Office.

This is our submission to the census revision process:

This Question is optional

1. Do you practice a religion?
Answer only if aged 6 years or over

2. If Yes, what religion do you practice?

3. How often do you practice this religion?
Mark the boxes that apply

This is our submission about the Religion question:

The religion question as currently formulated results in misleading statistics, because:

Recommendations on Question about Philosophical Practices

This is a separate submission on the question about Ethnic or Cultural Background. As there is sometimes an overlap between religion, ethnicity, and culture, we would like to have an input into this discussion as well.

We are aware that the Immigrant Council of Ireland has also made a submission about this question, and we share their concerns about the phrasing of the current question.

In particular, we find the following aspects of the current question confusing:

Overall, this question is confusing and it seems unlikely to produce accurate, unambiguous or useful answers. We encourage you to take account of the input of the Immigrant Council of Ireland and other groups who work directly in this area, and we would like to also have an input ourselves on the basis of the overlap between religion, ethnicity and culture.

Secular Sunday #400 – The right to opt out of religion class