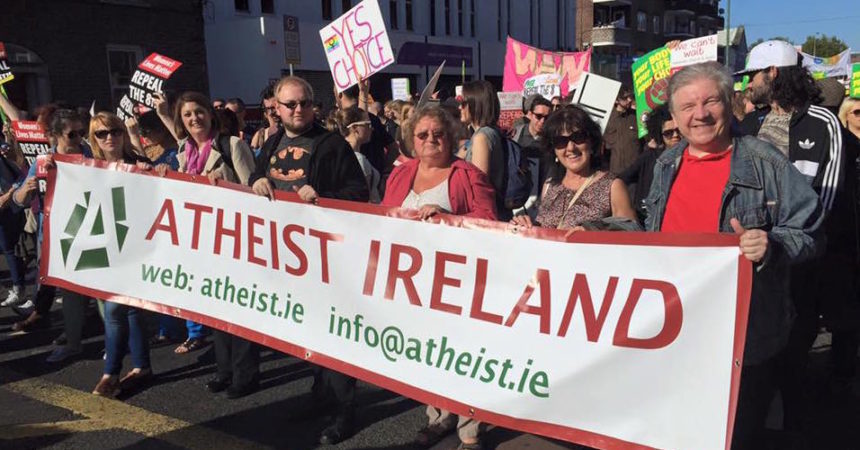 Atheist Ireland welcomes the Oireachtas Committee recommendation to have a referendum to repeal, not replace, the constitutional ban on abortion. It is important that the Government allows us to vote on this question as soon as is practicable.

Our policy is that society should address ethical issues based on human rights and compassion, and applying reason to empirical evidence, and not on religious doctrines; and that individual ethical decisions should where possible be made on the basis of personal autonomy and individual conscience, while not infringing on the rights of others.

Atheist Ireland has previously addressed the Oireachtas Health Committee, the Citizens’ Assembly, the United Nations Human Rights Committee, the Council of Europe, and the OSCE on this issue. We are also members of the Coalition to Repeal the 8th and the National Women’s Council of Ireland.

As well as supporting the right to abortion on a human rights basis, we also want to see religiously-inspired laws removed from our Constitution. In this article, we outline why the state must respect individual conscience on this secular healthcare issue.

Atheist Ireland argues that the 8th Amendment to our Constitution is religiously-inspired. In a secular, pluralist democracy people are free to hold whatever religious, ethical and moral beliefs they wish, but they do not have the right to impose those religious views on women who do not share those values.

The current situation in Ireland with regards to access to abortion does not respect freedom of conscience. Each of us forms our own individual ethical and moral beliefs. For some of us those beliefs will be inspired by religion, for others they will not be based on religious or faith-based beliefs. However each of us as individuals form our own ethical and moral beliefs, our laws must be based on human rights, compassion and the best available evidence.

Only a full repeal of the 8th Amendment will allow for legislation that is nuanced enough to address this issue. Atheist Ireland asks the Government not to put forward any rewording of article 40.3.3., but rather to hold a referendum, at the earliest possible date, that allows us to fully remove all reference to abortion from our Constitution.

The State must protect each individual conscience

Most Irish people are aware that the right to freedom of religion protects the rights of those with a religious conscience. But this right goes further than that, it is actually the Right to Freedom of Thought, Conscience and Religion which means it also protects the conscience of atheists, the non-religious and those who do not base their conscience on religious teachings.

The State should not impose laws on all citizens based only on the conscience of people who broadly share a religiously-inspired view on abortion. It should enable everyone to act in accordance with their own conscience, whether that conscience is religious or non-religious.

Many Irish people assume that ethics and morality can only be based on a religious value system. However, this is not the case. Religion is only one way in which people form their ethics and morality. Religious-based morality comes from commandments in holy books, dogma, traditions and from the authority of religious leaders. There are approximately 126 different religions in Ireland and religious-based morality varies between different religious belief systems and can change over time within religions.

Secular morality is not based on any dogma, commandments from books, traditions or on the authority of any leaders. Rather, secular-based morality is evidence-based, involves critical thought, is focused on the reduction of harm and the increase of well-being and is grounded in human rights. Secular morality holds that humans are neither inherently good nor inherently evil and that there are seldom easy answers to the difficult questions. When society engages with ethical dilemmas, the goal must be the reduction of harm to the individual members of our society.

In order to protect the supposed ‘profound moral values’ of the Irish society, the 8th Amendment denies access to abortion to women who have a different conscientious view on abortion. Similar moral arguments were put forward to deny access to contraception, divorce and marriage equality. We were told that the fabric of society would fall apart. This has evidently not been the case. Rather, what we have achieved together is a fairer, more compassionate society that respects its individuals.

Abortion should not be dealt with in our Constitution

Access to abortion is a healthcare issue. We have dealt with no other health care issues in our Constitution. This is because we understand that the Constitution is not the place to deal with matters pertaining to healthcare.

Only a full repeal of the 8th Amendment will allow the Oireachtas to properly formulate legislation on abortion in line with the highest standard of maternal and healthcare practice, human rights and the best available empirical evidence. Anything less than a full repeal will result in us simply having to return to this issue over and over in the future.

The proposed new bank holiday should be inclusive not religious