In a series of emails that the Department of Education tried to hide from Atheist Ireland, the head of Education and Training Boards Ireland recently revealed that he didn’t know whether an important Department policy about religion was in force in ETB schools. He also admitted that the current situation regarding religion in ETB schools is most difficult to defend.

During April of this year, The Irish Times was researching an article about the experiences of non-religious parents within our education system. The journalist talked to a nonreligious parent in Cavan who was trying to find out if the religion classes in the nearest non-designated ETB college were “neutral and objective” according to the State curriculum, or if there was faith formation integrated within these classes?

The parent needed to know as, without knowing the answer, it is impossible for any non-religious parent to vindicate their constitutional rights in an ETB school. The head of Cavan Monaghan ETB told the parent that the classes were neutral and objective. But how did that match up with a Department policy (called a circular letter) that requires religious worship in the school? The Irish Times journalist asked Mr Michael Moriarty, the General Secretary of the ETBI, the following question.

2. Head of ETBI asks Department of Education what the answer is

Extraordinarily, Mr Moriarty didn’t know the answer. Within an hour of receiving the email from journalist, he had asked the Department of Education and Skills what policies with regard to the teaching of religion apply in his own schools. 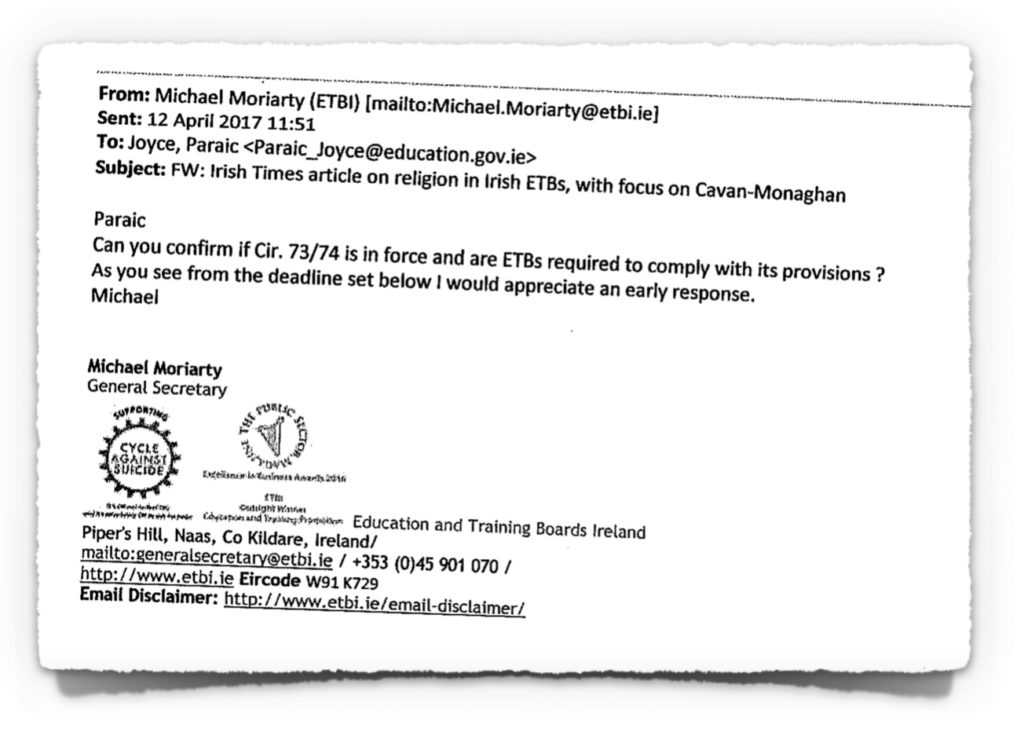 General Secretary of ETBI email to DoES on 12th April 2017

3. Department tells Head of ETBI what the Religion policy is

The next day, Mr Moriarty got a response was from the Department of Education and Skills. The Department described how the terms of Circular Letter 73/74 were old and needed updating, but that the current terms would need to be applied anyway.

This response also promised that there would be a new Circular Letter to replace 73/74 “in the coming weeks” and that some consultation would be required with parents.  That was around nine months ago and there is still no sign of either the replacement Circular Letter or the consultation.

4. Head of ETBI says Religion policy is most difficult to defend

It is not only non-religious parents who are frustrated by this situation. The General Secretary of the ETBI is frustrated with it too. In fact, in his response to the Department of Education and Skills, he stated that the status quo in the ETB sector with regard to religion policies is “most difficult to defend”.

General Secretary of ETBI Statement to DoES on 13th April 2017

5. Department hides these emails during Freedom of Information request

When Atheist Ireland sought these communications under the terms of the FoI Act, the Department refused to provide the documents.

7. Head of ETBI had earlier refused to answer this question for the parent

It is not only the Department of Education and Skills that wishes to keep this reality secret. It is also the ETBI. Even though the ETBI acknowledges privately that their religion policies in their schools are “most difficult to defend”, they continue to give non-religious parents a very different story.

Email from ETBI to non-religious parent on 18th November 2016

In this email, the ETBI is first admitting that they have human rights issues with respect to the teaching of religion in their schools, and they require the assistance of the Irish Human Rights Commission to figure out how to stop abusing the human rights of Irish children.

The General Secretary then proceeds to chastise the non-religious parent that they should support the ETB sector, even though in private he would acknowledge that the policies of his own schools in this area are “most difficult to defend”.

If the ETBI wishes to deal with the human rights abuses in their schools, the first step should be an honest statement of the problems.

Rather than offer prevarication and obfuscation to non-religious parents, they should publicly own up to the problems that they will admit in private, and then outline how to resolve them. Hand-waving and sophistry, to paper over the cracks, is only making the situation worse.

And the Department of Education should not seek to hide documents that are sought under the Freedom of Information Act. It is essential to the integrity of that Act that people reveal the relevant information when they are asked. They should not deny access to the documents until an appeal to the Information Commissioner forces them to back down.