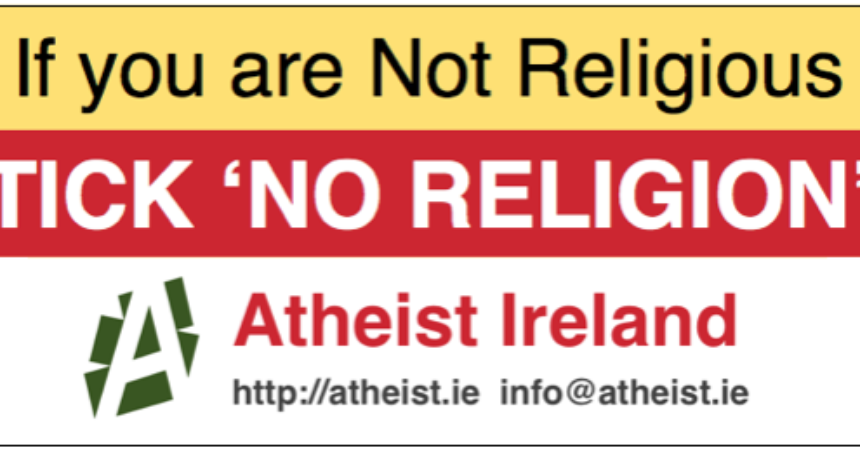 Atheist Ireland welcomes today’s census report on religion published by the Central Statistics Office. We are increasingly optimistic that a secular Ireland is inevitable, free of religious privilege and religious discrimination against any citizens.

The census results on religion broke a significant barrier – more Irish people now have no religion (468,400) than members of all minority religions combined (439,000). That should encourage more atheists to stand up for our rights, particularly in the education system, and to support equal treatment for everyone, regardless of religious or nonreligious beliefs.

Another 125,300 people declined to answer the religion question. Some of the ‘not stated’ may be religious, but certainly not all of them. So the actual figure for No Religion, whatever it is, is over 10%. Also, in Dublin City, Dun Laoghaire and Galway, more than one in three of the population is non-Catholic.

It is important to note that the official census figures for Atheist (7,769) and Agnostic (5,198) are those small number of atheists or agnostics who, for whatever personal reasons, wrote ‘Atheist’ or ‘Agnostic’ under ‘Other Religion’, despite atheism and agnosticism not being religions.

In the run-up to the census, Atheist Ireland encouraged atheists who have no religion not to do this, but to instead tick the No Religion box. 468,000 people did that, compared to 269,000 five years ago. When Atheist Ireland was founded in 2008, the previous census had only 186,000 nonreligious.

However, we believe that these figures still greatly overestimate the strength of religion, and particularly Catholicism, in Ireland, for three reasons.

Also, for the first time, the Irish Census results include all religious minorities with thirty or more respondents. There are nearly sixty listed. Here are some of the more interesting facts: