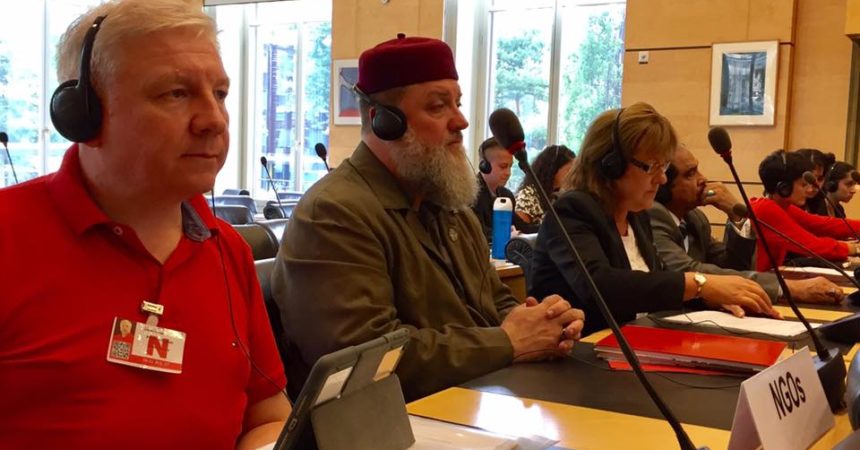 This week in Geneva, the United Nations Human Rights Committee questioned Pakistan on its human rights obligations under the International Covenant on Civil and Political Rights. Before this, the Committee was briefed by six NGOs, including a unique joint delegation from Atheist Ireland, the Evangelical Alliance of Ireland and the Ahmadiyya Muslim Community of Ireland. We are now awaiting the Concluding Observations of the Committee about Pakistan.

We told the Human Rights Committee that we are Atheists, Evangelical Christians, and Ahmadi Muslims from Ireland. We have very different world views, but we work together to promote human rights. We said that the work of the UN Human Rights Committee has already helped us to challenge religious discrimination in Ireland. We said we were now speaking out for minorities in Pakistan, who are afraid to speak out publicly themselves.

Issues that we raised with the Committee

We told the UN Human Rights Committee that Pakistan says that it guarantees the fundamental rights of all citizens, but the reality of life on the ground contradicts this. We said that the Pakistani Penal Code is not compatible with the Covenant rights to Freedom of Religion and Belief, Non-Discrimination, Effective Remedy, Life, Protection of the State, Equality Before the Law, Privacy, Expression, Assembly, Association, and Participation in Public Affairs. The Committee addressed all of these issues in its questioning of Pakistan.

This summary covers issues that we raised with the Committee that are related to Freedom of Religion and Belief, the Blasphemy law, and related violence including mob killings of Ahmadis, forced conversions of Christians, and disappearances of secular bloggers. On each of these issues, we highlighted the intertwined problems of unjust laws, and violence outside those laws, both of which are grounded in religious discrimination and persecution.

Freedom of Religion and Belief: What we said to the Committee

We said that Pakistan has told the Committee that it cannot enact laws that are repugnant to (its interpretation of) Islamic injunctions. We said that this inevitably leads to breaches of rights guaranteed by the Covenant. We said that Pakistan must ensure that all citizens can peacefully practice their religious or nonreligious beliefs, without discrimination or persecution or forced conversions. In particular, this must include abolition of the separate electoral list for Ahmadis, ending the classifying of Ahmadi literature as hate literature under terror laws, and ending the persecution of atheists, Christians and other religious minorities.

Freedom of Religion and Belief: What the Committee said to Pakistan

There are two issues here: the law itself, and its implementation in practice. I ask the delegation about submitting the law to religious rule. Is that compatible with freedom of belief and religion? Is the the role of a Constitution to define who is a Muslim and who is not? In the Constitution of Pakistan there are definitions of what is, and is not, Islam and who is, or is not, Muslim. Article 20 in the Constitution recognises freedom of conscience, but Articles 2A, 236A and 236B are not in line with that. The Second Amendment says Ahmadiyya are not considered Muslims. Does that not constitute interference of the State in freedom of belief? (Committee Member Yahd Ben Achour)

Blasphemy Law and Related Violence: What we said to the Committee

We told the UN Human Rights Committee that Pakistan must repeal its blasphemy laws, release all prisoners detained for blasphemy, and train the police to protect victims of anti-blasphemy mob violence and murder. As examples, we highlighted: the particular singling out of Ahmadis; the case of Asia Bibi, a Christian woman facing execution for blasphemy; recent attacks on journalists and activists, including five secular bloggers who were detained or disappeared; and the case of an atheist ex-Muslim blogger from Pakistan who is seeking asylum in Ireland, and who has received death threats for blasphemy even after leaving Pakistan.

Blasphemy Law: What the Committee said to Pakistan

In the Pakistan criminal code there are provisions that sanction attacks on religion and the sacred, for example 295B and 295C. They include Articles concerning blasphemy, that is profanity and profane treatments of the Quran, and insults to the Prophet, that can lead to imprisonment and also capital punishment. Section 298 sanctions attacks on religious sentiment, religious feelings. Section 298A penalises insults or attacks on the spouse or family of the Prophet. Section 298B and 298C target particularly the Ahmadiyya or Qadiani and other groups, and thus penalises their wish to be considered as Muslims, although this community says that it is Muslim.

The Special Rapporteur on the Independence of Judges and Lawyers has concluded that “these laws serve the particular interest of extremist groups. They are not just contrary to the Constitution of Pakistan, but also to the standards of international human rights law, in particular those related to non-discrimination, and freedom of expression and opinion.” The Special Rapporteur has recommended to Pakistan that they abrogate or amend the blasphemy laws, in order to align themselves with the obligations of Pakistan under human rights law. (Committee Member Yahd Ben Achour)

Mob Violence: What the Committee said to Pakistan

In practice, the social political climate in general and social pressure are a true source of discrimination. In particular, on the situation of the Ahmadiyya community. So by way of example, as just a single example, on 13 April 2017, a student Ahmadi Mashal Khan was lynched at the University Abdul Wali Khan in Mardan. But not just towards that community, also towards certain other religious minorities such as Christians, or the Hazara who are Shia, are often subject to attacks in society on their temples, their Mosques, and an Ahmadi Mosque is currently closed. Why is that? What is the reaction of the delegation to this climate which is hostile towards religious minorities in Pakistan? And what is the Government doing to overcome these aggressive phenomena towards religious minorities? (Committee Member Yahd Ben Achour)

Quite often, especially in the provinces, where you are not allowed to proffer evidence because that would be replicating the whole thing, what is to stop a person from raising a case of blasphemy against a person because he is fed up with his neighbour, and just says that he has heard him saying blasphemous things? And we have seen people actually stoned to death by mob action. We have the example of a student Ahmadi Mashal Khan, at the University Abdul Wali Khan, who was killed by an angry mob in the presence of authorities, and that does not sit well with the democratic principles that have told the Committee that Pakistan has. (Committee Member Duncan Laki Muhumuza)

Attacks on Journalists: What the Committee said to Pakistan

My next question relates to the powers given to the Pakistan Telecommunication Authority, or PTA. According to information before us, the Prevention of Electronic Crimes Act grants carte blanche to the PTA to restrict access to information on the Internet without judicial authorisation. Could you please explain how the powers given to the PTA by the Act are in line with the Freedom of Expression as provided in Article 19 of the Covenant? (Committee Member Yuji Iwasawa)

We are disturbed by the high rate of violence, disappearance and killings of journalists, human rights defenders and lawyers, and the low rate of prosecutions. One NGO has recorded 73 incidents of journalists or members of the media being killed since 2002, with only five convictions for such a murder.

One example is that in early January of this year, five human rights defenders were abducted from Islamabad and parts of Punjab province [Note from Irish delegation: this refers to the secular bloggers whose case we had raised with the Committee]. Four reappeared in late January, and one remains missing. One of the defendants, Waqas Goraya, has said that a Government institution with links to the military held him and tortured him. There are also other examples, which I will provide.

Your reply acknowledges such attacks, and indicates that you have established a hotline, a post-injury compensation mechanism, and life insurance for victims. But with respect to violence committed against these groups by private actors, what additional measures are you pursuing to ensure the right to life and personal security for journalists and social activists? What protective measures are you taking, as well as measures to ensure accountability?

Although your replies have attributed such attacks to terrorists, eye witness reports have also reported the involvement of security, intelligence, and law enforcement personnel in some such incidents. Can you provide us with information regarding the measures that you have taken to investigate allegations of the involvement of State forces in attacks on journalists, lawyers and human rights defenders, and the measures you have taken to prosecute and punish those responsible? (Committee Member Sarah Cleveland)

This week in Geneva, the United Nations Human Rights Committee questioned Pakistan on its human rights obligations under the International Covenant on Civil and Political Rights. Before this, the Committee was briefed by a joint delegation from Atheist Ireland, the Evangelical Alliance of Ireland and the Ahmadiyya Muslim Community of Ireland.

This summary covers issues that we raised with the Committee that are related to Freedom of Religion and Belief, the Blasphemy law, and related violence including mob lynchings of Ahmadis, forced conversions of Christians, and disappearances of secular bloggers.

Our written submission to the UN is