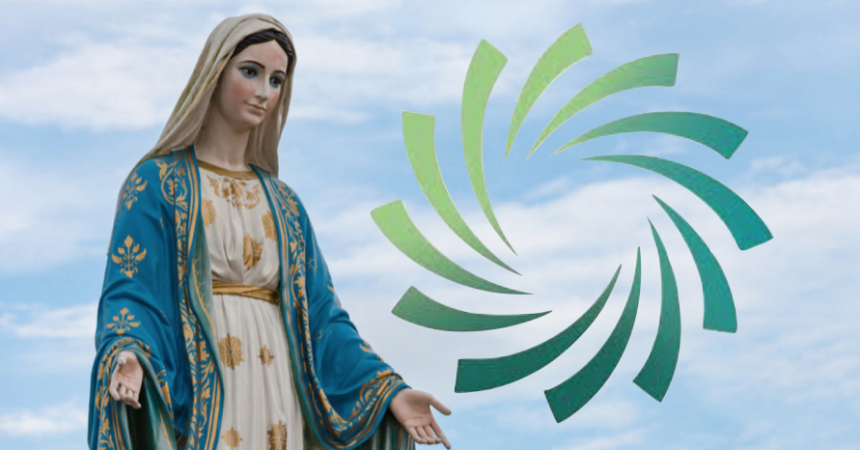 Department of Education to Issue New Guidelines on Teaching Religion

Atheist Ireland has learned that the Department of Education and Skills is to issue new guidelines on the teaching of religion at post-primary level. This follows an engagement between a parent who is a member of Atheist Ireland and the ETB sector, with regard to how religion classes are conducted within ETB Non Designated Community Colleges.

Specifically, whereas ETB schools inform atheist parents that their religion classes are “neutral and objective”, such that they would be suitable for those of all faiths and none, in reality when pressed they admit that this is not true.

In fact, ETB schools and colleges are compliant with all current circulars, which means that their religion classes must include at least two hours per week of religious instruction and worship. The reality is that this is almost universally Roman Catholic religious instruction and worship, which is being imposed on non-Catholic children, despite ETBs making contrary claims to non-Catholic parents.

Under Section 6 – (l) and (m) of the Education Act, both the Minster and the ETBs are obliged in the implementation of the Act to have regard to the following:

(l) to enhance the accountability of the education system, and

In the context of transparency around the production of the new guidelines for teaching religion at second level, we should anticipate a detailed consultation exercise from the Department of Education and Skills. Part of this transparent exercise should specify how the new Guidelines and/or Circular Letter will protect the human rights of parents and students with respect to the teaching of religion in ETB non-designated Community Colleges. This is something that has already been described in great detail within the Toledo Guiding Principles on Teaching about Religion and Beliefs in Public Schools.

A member of Atheist Ireland, who is a parent of four children, has been considering the second level options for his eldest child from this coming September 2017. In this context, in August 2016 he wrote to Mr John Kearney, the CEO of Cavan-Monaghan ETB (CMETB) with a few simple questions on their policies with respect to religious education.

Specifically, he wanted to know if faith formation was kept separate from the State Religious Education course. Mr Kearney didn’t know the answers and so he directed the queries to the ETB Corporate Services department instead. They didn’t know either and so they sent the queries to Mr Michael Moriarty, the General Secretary of Education and Training Boards Ireland (ETBI).

Mr Moriarty couldn’t answer the parent’s questions on ETB policies either, except to say that the ETBI is arranging a series of engagements with the Irish Human Rights and Equality Commission (IHREC). This is an implicit admission that the ETB policies on religious education are currently inconsistent with their human rights obligations. Mr Moriarty then sent the parent back to Mr Kearney.

Eventually, after a long series of correspondence spanning more than six months, Mr Kearney wrote to back to the parent with a set of answers, stating that the religion classes taught within ETB schools are “neutral and objective”. The image below provides the exact quotation from this letter.

However, Mr Kearney also made reference to Circular Letter 73/74 in his response and then refused to answer any follow-up questions. This instruction from the Department of Education and Skills requires that the religion classes attended by all children, must include at least two hours per week of religious instruction and worship. That is, the requirement on ETB schools is that they provide religious instruction classes, which are the precise opposite of

That is, the requirement on ETB schools is that they provide religious instruction classes, which are the precise opposite of “neutral and objective”.

In an effort to get some clarity on this issue, the parent arranged a meeting with the principal at his local ETB school. Since the CEO of CMETB was refusing to answer any questions on ETB polices around religious education, he also asked all of his local TDs to put these questions to the CEO of CMETB on his behalf.

The answers obtained from these engagements gave rise to further contradictions. The information provided by the principal at the ETB school in relation to questions on this topic, included the following answers:

– “[Circular Letter 73/74] is more often honoured in the breach than the observance.”

– “[Circular Letter 73/74] is not applied in this school and we are not living up to those obligations.”

– ‘’You are asking whether we are conforming to [Circular Letter 73/74] and the answer is no.”

– “I know that you would see this school as in breach of [Circular Letter 73/74] and I would see it as that as well.”

The above statements means that ETB Non Designated Community Colleges are claiming that they no longer provide religious instruction and worship to students. In contrast, the answers provided to the local TD by the CEO of CMETB, offered precisely the opposite information.

Specifically, the CEO of CMETB stated that he is “confident that they comply with all current DES circulars in this area”. This is especially bizarre since the Board of Management at the school in question, is a subcommittee of CMETB. This letter from the CEO of CMETB is reproduced in full below. 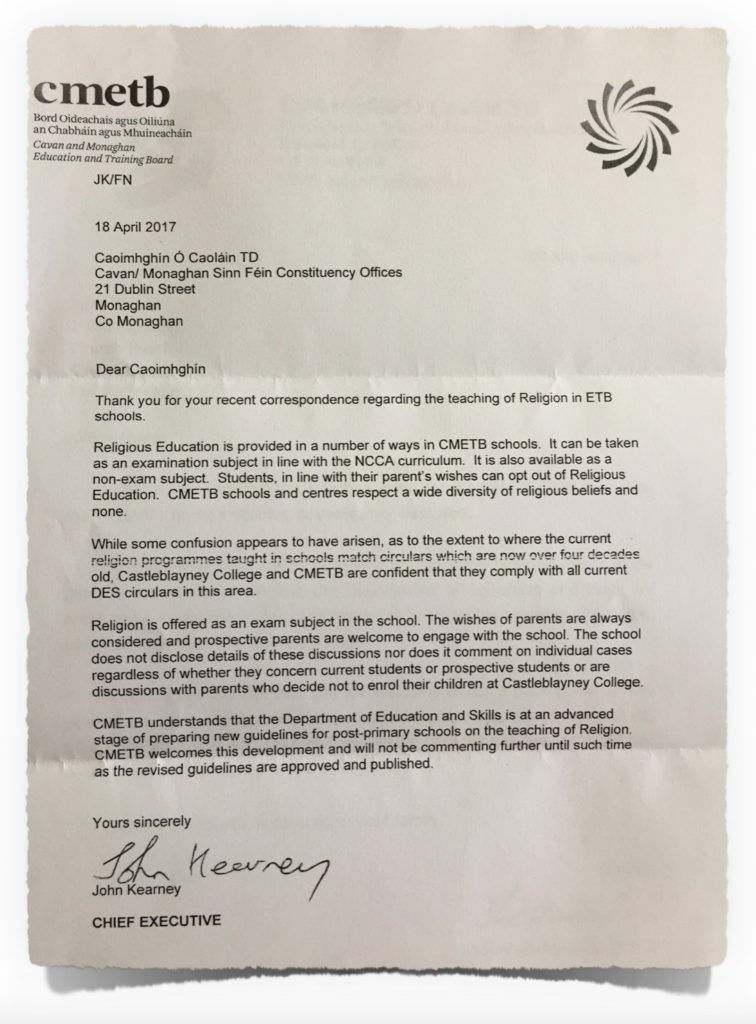 If ETB Non-Designated Community Colleges are compliant with Circular Letter 73/74, which requires that religion classes include at least two hours of religious instruction and worship per week, then the ETB sector is not being honest or forthright when telling non-Catholic parents that their religion classes are “neutral and objective”. Rather, such prevarication serves only to provide non-Catholic parents with an artificially benign view of religion within ETB schools, which may not be at all different from schools with an overt Roman Catholic ethos.

The ETB sector is quick to admit that they need to consult with the IHREC about their human rights issues, but is entirely unwilling to state in a clear and forthright manner, what is happening in their religion classes. From the top of the ETBI, to the CEO of CMETB, to the principals of individual ETB schools, it seems impossible to get a straight answer on this point. This is an intolerable position for a public body to place parents and children in. Our education system should be accountable to the citizens who fund those services.

Trust is a hugely important factor within any education system. All parents who deliver their children into any school, must be able to trust that institution unconditionally. This long correspondence trail with every level of the ETB organisation, provides a dissembling series of directly contradictory and less than transparent answers. Sophistry is hardly a good way to engender trust.

That the ETB sector should refuse to answer any further questions, before new guidelines are published by the Department of Education and Skills, is hardly satisfactory either. Where does this leave current and prospective parents and students? It seems that until further guidelines are forthcoming from the Minister, the ETB sector will not be able to state what their own policies are.

Indoctrination that masquerades as neutral and objective information, is some of the most insidious proselytising of all. Atheist Ireland will continue to campaign for a transparent education system, which respects the human rights of all parents and children by teaching religion in an objective, critical and pluralist manner. Any new guidelines issued by the Minister, should insist that public schools must respect human rights in this regard.