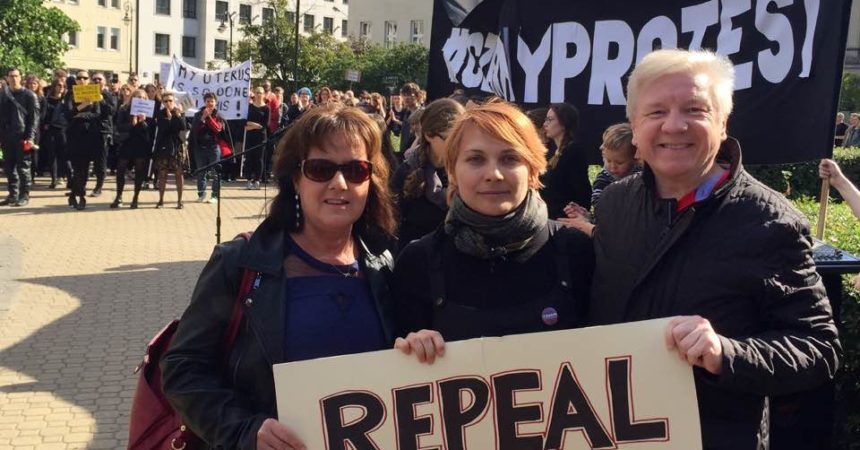 The Polish government this week backed down from a controversial Bill to make abortion more restrictive, because of a wave of protests in Poland and internationally. In September, Atheist Ireland spoke against this Bill at a rally in Warsaw, when we were in Poland for the annual OSCE human rights meeting.

There are similarities and synergies between the Irish and Polish abortion rights campaigns, which Jane Donnelly discussed yesterday with Dil Wickremasinghe on the Global Village programme on Newstalk radio.

The Polish Bill was presented and supported by a conservative religious Institute called “Ordo Iuris”. This Institute also objects to same sex marriage, civil partnership and sex education. The Catholic Church in Poland supported this Bill as it seeks to ensure that laws and policy in various countries including Poland and Ireland reflect its teachings.

Ordo Iuris, the Institute that presented the Bill to the Polish Parliament, has connections and supports another religious conservative organisation called Alliance Defending Freedom.

Alliance Defending Freedom spoke at the United Nations Human Rights Council in September in relation to Ireland, and supported a total ban on abortion from conception.

This was at the meeting at which Atheist Ireland spoke against the Irish blasphemy law, religious discrimination in Irish schools, and the Irish abortion law.

Alliance Defending Freedom also opposed same sex marriage in Ireland notwithstanding the fact that no country had made a Recommendation at the UN Universal Periodic Review to remove the Constitutional right to same sex marriage.

Atheist Ireland also attended the OSCE Human Dimension Implementation Meeting in Warsaw in September. While we were there, we spoke at a Black Protest Rally on the Eighth Amendment and the similarities between Poland and Ireland in relation to abortion. Both countries are dominated by the Catholic Church.

Protest Rallies in Poland and Ireland

Not only were protests held throughout Poland, but Polish women also went on strike last Monday the 3rd of October. Nothing like this has even happened in Poland before, and the Black Protests garnered huge support. In Ireland a protest was held last Monday in support of the Black Protest. It was a huge success and was very well attended.