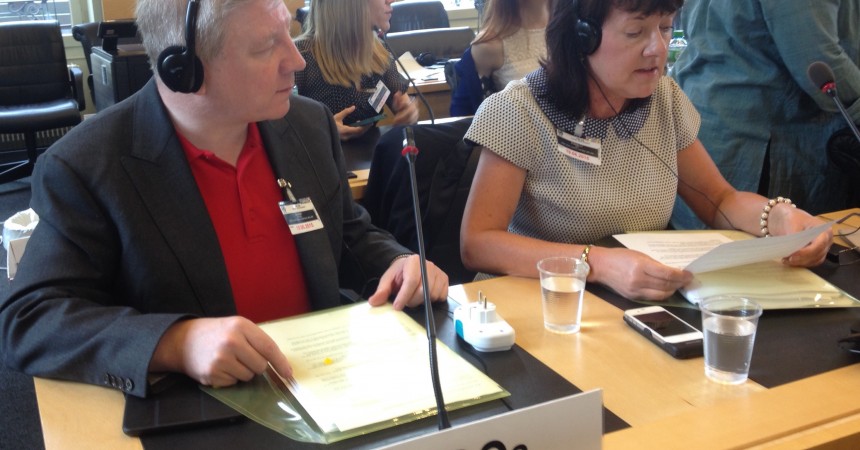 The Council was reviewing Ireland’s human rights record under the Universal Periodic Review process. We spoke as members of Atheist Alliance International, which has accredited observer status at the United Nations which enabled us to speak.

We will next be going to Warsaw, where we will address the annual OSCE human rights meeting on Monday and Tuesday.

The chairs of both major UN Human Rights Committees have strongly criticised Ireland’s lack of separation of church and state.

Ireland now claims that it is constitutionally obliged (not merely permitted, but obliged) to allow religious discrimination, in order to buttress religion, including in publicly funded schools.

Ireland needs a Religious Equality Referendum to be able to meet its UN human rights obligations.

Ireland should urgently hold a referendum to remove the offence of blasphemy.

The Organisation of Islamic Cooperation seeks global laws against defamation of religion. As part of this, Pakistan at the UN has cited specific language from the Irish blasphemy law.

Heiner Bielefeldt, United Nations Special Rapporteur on Freedom of Religion, has advised us:

“The major damage done by this law is international. Those countries that have an intimidating anti-blasphemy practice like to quote European countries to unmask Western hypocrisy.”

Nine different sets of United Nations and Council of Europe committees have concluded that Irish schools breach the human rights of atheist and minority faith children, families and teachers.

Irish schools breach very fundamental human rights like freedom of religion and belief, freedom from discrimination, equality before the law, and no effective remedy.

Ireland should oblige publicly funded schools to deliver educational services, including employment, state curriculum and enrolment, in an objective, critical and pluralistic manner, and with no religious discrimination of any kind.

We support the many recommendations to strengthen women’s right to abortion in Ireland.

We support the Campaign to repeal the Eighth Amendment of the Irish Constitution, to enable the Irish Parliament to legislate for the right to abortion.

Other groups who spoke

A total of nine civic groups addressed the session about Ireland:

The following is the written statement that Atheist Ireland submitted for the Council Session.

1. Freedom of Religion and Belief Overview

All of our priority issues are influenced by Ireland’s overall argument that the State is constitutionally obliged to buttress religious discrimination, including in publicly funded schools.

(a) At Ireland’s first UPR, Ireland reiterated that it was never acceptable for any government to treat national or religious or ethnic minorities as inferior. Ireland also said the Constitution contains a provision guaranteeing freedom of religion.
(b) Since then, the chairs of both major UN Human Rights Committees have since strongly criticised Ireland’s lack of separation of church and state.
(c) The State has passed various laws that tackle discrimination on other grounds, but that retain the right to discriminate on the ground of religion.
(d) As well as specific issues detailed in this statement, the State also obliges the President, Judges, Prime Minister and other high office holders to swear a religious oath.
(e) The State now claims that it is constitutionally obliged (not merely permitted, but obliged) to allow religious discrimination to continue in order to buttress religion.

Urgently hold a Religious Equality Referendum to bring about any Constitutional changes required to meet its UN human rights obligations.

Ireland said that it would examine the following recommendations:

136.53. Repeal the constitutional and legislative provisions criminalising the offence of blasphemy, these provisions could constitute an excessive limitation to the freedom of expression (France).
136.54. Take necessary steps to amend its legislation on freedom of expression and remove prohibition of blasphemy in line with ICCPR article 19 and Human Rights Committee’s General Comment 34, and the Venice Commission’s recommendation (Sweden).

(a) The outgoing Government agreed to hold a referendum to remove the blasphemy clause, then put it off for the incoming Government to deal with. The incoming Government has repeated that it will hold a referendum, but has set no timetable to do so.
(b) Islamic States at the United Nations have been campaigning to have laws against blasphemy, or defamation of religion, implemented internationally. They make political use of laws against blasphemy passed in western states such as Ireland.
(c) Islamic states have used the Irish blasphemy law at the United Nations to promote universal blasphemy laws. Pakistan has used the language of Ireland’s law in its proposals to the Ad Hoc Committee on the Elaboration of Complementary Standards in its call for an international instrument preventing the defamation of religion.
(d) Many legal authorities have argued that a universal law against defamation or blasphemy would subvert the principles of human rights and free expression legitimising a range of unacceptable actions taken by governments.
(e) Heiner Bielefeldt, United Nations Special Rapporteur on Freedom of Religion, shares this concern, and has advised us as we prepared this submission: “Of course you are right that the major damage done by this legislation is the international one. I wouldn’t expect any harsh verdicts being handed down in Ireland, but those countries that continue to have an intimidating anti-blasphemy practice like to quote European countries to unmask Western hypocrisy. So I hope things will be moving in the right direction. One can also cite General Comment no. 34 of the Human Rights Committee and the Rabat Plan of Action. Both documents call upon States to move away from criminalising so called blasphemy.”

Ireland said that it supports the following recommendations:

However, Ireland said only that it would examine the following recommendations:

136.29. …abolish religious discrimination in the schools (Saudi Arabia).
136.80. Review and amend laws, as appropriate, to ensure publicly-funded schools provide equal access to education for all, irrespective of faith or religious affiliation (USA).

(a) Nine different sets of United Nations and Council of Europe committee conclusions have now told Ireland that religious discrimination is breaching the human rights of atheist and minority faith children, families and teachers in Irish schools.
(b) The State is asking the Catholic Church to divest some schools to multi-denominational Patron bodies. This has not happened. Also, if divestment was to happen, the Catholic Church is seeking a stronger Catholic ethos in the vast majority of schools that they would retain, so most secular families would be in an even worse position.
(c) The State has passed or introduced new laws that claim to tackle discrimination in schools admissions and employment of teachers, but these laws retain the right of publicly-funded schools to discriminate on the ground of religion.
(d) The State is preparing a new curriculum on teaching about religions beliefs and ethics, but under the current laws they cannot ensure that it will be delivered in an objective, critical and pluralistic manner.
(e) Atheist Alliance International supports in particular recommendation 136.80 by the USA, which gets to the core of the problem.

(a) Overall, provide a State system of secular schools as the default option for all families. Immediately, amend or repeal Section 15 of the Education Act 1998, Section 7(3)(c) of the Equal Status Act 2000, and Section 37(1) of the Employment Equality Act 1998, to oblige publicly funded schools to deliver educational services, including employment, state curriculum and enrolment, in an objective, critical and pluralistic manner, and with no religious discrimination of any kind.
(b) Replace the patronage system (in which most schools are publicly funded private schools, each with their own ethos) with an inclusive secular system, in which the foundation is State-run schools that are neutral between religions and atheism, and in which private ethos schools are an add-on alternative as opposed to being the basis of the school system.
(c) As an interim measure for some families, and only as that, ensure the widest possible availability of multi and non-denominational schools. In areas where there is only one standalone school, enforce divestment or change of ethos in order that everybody in that area has access to a school with an ethos that is neutral between religions and atheism and does not discriminate.
(d) Ensure that there are workable policies in place to accommodate children who have opted out of formal religious education. Ensure that such children are not subject to religion being integrated throughout the remainder of the curriculum, even in denominational schools.
(e) Ensure that there is an effective complaints mechanism and an effective remedy, in practice and in law, to vindicate breaches of human rights in schools.

4. Repealing the Irish Ban on Abortion

Ireland said that it supports the following recommendation:

135.136. Conduct consultations involving all stakeholders, including civil society organisations, in order to examine whether Article 40.3.3 of the Constitution could be revised and the legal framework related to abortion broadened (Switzerland).

Atheist Alliance International affiliate, Atheist Ireland, is a member of the Campaign to repeal the Eighth Amendment of the Irish Constitution, to enable the Oireachtas to legislate for the right to abortion. Atheist Ireland supports the analysis and recommendations of the States seeking to strengthen women’s right to abortion in Ireland, and of the Irish civil society groups who are advocating for this right.

Secular Sunday #247 'Atheist Ireland to speak at UN and OSCE'