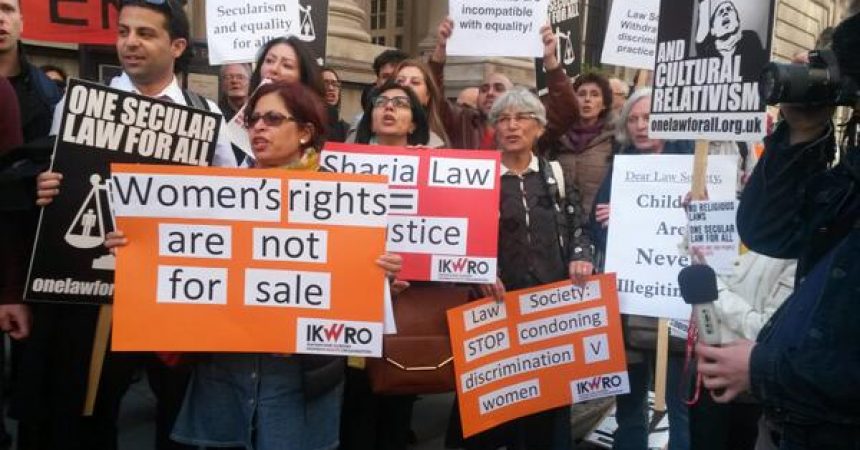 Atheist Ireland is among many women’s rights organisations and campaigners from Britain and internationally who have today submitted a letter to the United Kingdom Home Secretary raising serious concerns about the UK Government’s ‘independent review’ into Sharia courts in Britain.

The letter states that the limited scope of inquiry and its inappropriate theological approach will do nothing to address the discriminatory effect and intent of the courts on private and family matters: areas where, arguably, the greatest human rights violations of minority women in the UK take place.

Rather than taking a human rights approach, the government has constituted a panel and terms of reference more suited to a discussion in theology than one which serves the needs of victims whose human rights are violated.  By making these religious appointments, the government has lost a vital opportunity to examine the discriminatory nature of not only Sharia bodies but all forms of religious arbitration fora including the Batei Din.

The panel chair, Mona Siddiqui, for example, is herself a theologian. One of the scholars, Sayed Ali Abbas Razawi, is the joint secretary for Majlis Ulama-e-Shia, which sends delegations to the Islamic Republic of Iran. In his sermons, he has supported the death penalty in Islamic states, advised Muslims to go into government “and change the system” and says women dressed in “tight clothing” are “corrupted”.

Another scholar, Qari Muhammad Asim, speaks of “men retain[ing] their wives in marriage” and sees women in relation to their male guardian: “Each women is someone’s mother, daughter, sister or wife”. He also trivialises violence against women by saying “women as well as men can be victims of domestic abuse”.

Both scholars advising the panel are on Imams Online. Khola Hasan, a judge at the Islamic Sharia Council, is a contributing editor to Imam Online. Clearly, Imams and Islamic scholars cannot investigate themselves.

“Women and Sharia Law: The Impact of Legal Pluralism in the UK” by Elham Manea published in May 2016 documents the harmful and even life threatening consequences for vulnerable minority women in matters pertaining to the family.  Testimonials gathered by campaigners highlight some of the emotional, mental and physical effects of the courts on women and children.

The women’s rights campaigners are calling on the Home Secretary to establish a thorough and impartial judge-led human rights investigation, which will fully examine arbitration in family matters and whether violations of human rights are condoned or even promoted by Sharia bodies.

Broader issues such as the treatment of religious minorities including minority sects in Islam and decisions pertaining to apostasy and blasphemy must also be examined to understand the full range of threats faced by people affected by religious laws, and indeed, by the State promoting these laws.

The law and not religion is the key basis for securing justice for all citizens. Campaigners urge the government to do the right thing and ensure that the same principles of human rights, equality before the law, duty of care, due diligence and the rule of law are applicable to all British citizens.

See also video footage of a 30 April conference on Sharia Law, Legal Pluralism and Access to Justice with author Elham Manea and other women’s rights campaigners.

See also crowdfunding campaign to get a copy of Elham Manea’s book: “Women And Sharia Law: The Impact of Legal Pluralism In The UK” into the hands of every Minister, MP and Peer.

We must strengthen, not subvert, the SIPO law on funding of political activity