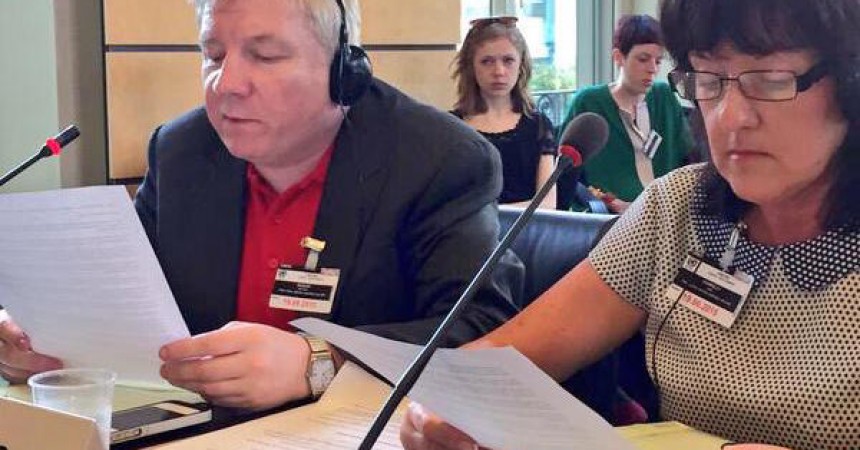 The UN will ask Ireland next week about secular education and our blasphemy law, matching recommendations that Atheist Ireland successfully lobbied for in our meetings in Geneva last month.

For the first time, Ireland will be specifically asked about replacing the school patronage system with an inclusive secular one. Atheist Ireland highlighted that the Oireachtas Education Committee has already concluded that multiple patronage and multiple ethos can lead to segregation and inequality, after we lobbied that Committee two years ago.

Ireland will also be asked an overview question about what it is doing to prevent discrimination against religious minorities. Atheist Ireland suggested including this composite approach along with other questions, as it would encompass the blasphemy law, education system, religious oaths, and the State’s claim that it is constitutionally obliged to buttress religious discrimination.

There will also be specific questions about our blasphemy law, our abortion law, and how children and parents can choose from among religious, multi-denominational or non-denominational types of schooling and curricula, with full exercise of the right to freedom of religion or belief, including the freedom not to hold a particular religion or belief.

Several countries have published the advance questions that they will ask Ireland, including countries that Atheist Ireland met in Geneva. Other countries will finalise questions between now and next Wednesday, 11 May, when the UN will question Ireland about our human rights record under the Universal Periodic Review process.

Among the advance questions on issues that Atheist Ireland successfully lobbied for are:

The UK will ask Ireland:

“What is the Government of Ireland doing to prevent discrimination against religious minorities and what plans are there to change its blasphemy laws?”

The Czech Republic will ask Ireland:

“How does the Government ensure that children and parents have the opportunity to choose from among religious, multi-denominational or non-denominational types of schooling and curricula? What are the legislative and other safeguards ensuring the full exercise of the right to freedom of religion or belief, including the freedom not to hold a particular religion or belief?”

Atheist Ireland and the Irish Family Planning Association also highlighted the question of abortion, and this has been raised in advance questions by the Czech Republic, Germany, Netherlands, Norway, Slovenia and Sweden.

These questions, and we hope the questions to be finalised by other countries between now and next Wednesday, show the importance of comprehensive lobbying on these issues.

Atheist Ireland has sent several detailed briefing documents to the UN, has addressed a pre-session meeting in Geneva, and has met personally with key delegations who are already asking questions that we have recommended.

The Civil Registration Act is Dysfunctional