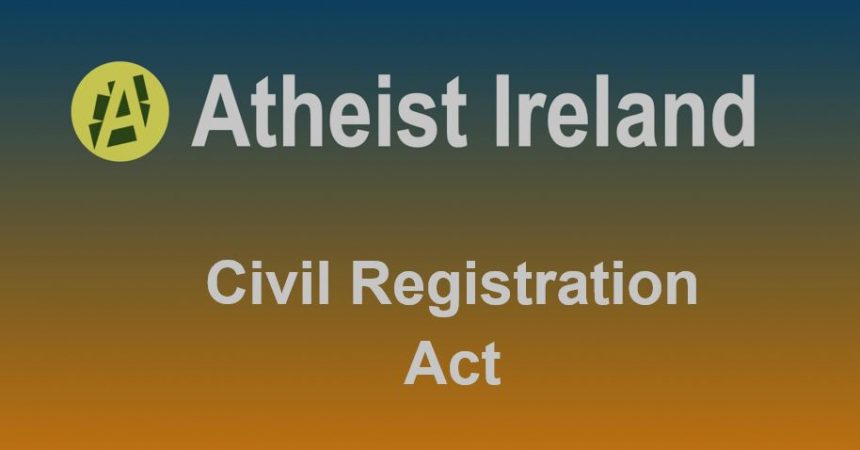 The Functioning of a Dysfunctional Law

Atheist Ireland has consistently opposed the Civil Registration (Amendment) Act, 2014. This legislation was introduced by Minister for Social Protection Joan Burton, in order to allow both religious and secular bodies to solemnise civil marriages. By providing much more onerous criteria for secular bodies to meet, this legislation discriminates against non-religious citizens. However, in attempting to do so, it is also comically inept in its efforts to define what a religion is.

The first sign of trouble in this regard, was when Joan Burton described for the Dáil the kind of people who shouldn’t be permitted to celebrate weddings in Ireland. The Civil Registration Act then became the first piece of legislation in the history of the State to be aimed at Elvis impersonators.

“Another concern I had about some of the material in the submission from Atheist Ireland is that we must be specific about the criteria because there are places in the United States where the criteria for solemnising are very broad and, as a result, an Elvis impersonator in Las Vegas can perform wedding ceremonies. None of us wants anything like that here. There is all-party agreement on that point.”

From these august beginnings, the operation of the Civil Registration Act has since gone downhill. Atheist Ireland has previously reported on cases of both religious and secular bodies, in clear breach of the law, being recognised anyway by the Civil Registration Service. However, considering one specific example of a Church application to be recognised as a religious body, highlights just how inane the State’s efforts to legislate for religiosity have become.

The Church of the Flying Spaghetti Monster applied to the Civil Registration Service in order to be recognised as a religious body. Where the application requested a description of their form of worship, the Church stated that they “teach while wearing colander based headwear”. The Civil Registration Service rejected the application because of this answer, saying that it “lacks credibility”.

In Christus Dominus, the 1965 Papal Decree on Bishops, Pope Paul VI stated that “Bishops … have been made true and authentic teachers of the faith”. Teaching therefore must be a credible form of worship, since the Roman Catholic Church has been accepted by the Civil Registration Service. However, it is unclear why teaching while wearing unconventional millinery is viewed by the Civil Registration Service as an entirely acceptable form of worship for Roman Catholic clergy, while a very similar form of worship is not acceptable for other Churches. Whatever the reason, we have a Minister for Social Protection who is not only legislating to ban white jump suits with tassels from weddings but also applying different laws to different citizens, based only on subjective opinions about their hats.

The Civil Registration Service has also objected to the form of worship that adherents to the Church of the Flying Spaghetti Monster participate in, on the basis that “any group of people” may come together in this manner and that this “does not in itself constitute a religious body”. In this regard, the Civil Registration Service distinguishes between just “any group of people”, as compared to Roman Catholic priests who have been awarded by the creator of the universe with the power to transubstantiate wine into the blood of an Iron Age Jewish carpenter.

This is an interesting legislative test to introduce into the Irish Statute Book but problems arise when the votaries of other denominations also experience supernatural events. For example, an Ordained Pastafarian Minister has reported clandestine messages that were received during a visitation from the Flying Spaghetti Monster, while he enjoyed a plate of tagliatelle in Rialto one evening. These covert revelations have become known within the Church as the Three Secrets Of Fatima Mansions.

How then can the Civil Registration Service have determined that every Roman Catholic priest in the country does indeed have magic powers, while the purported carbohydrate based apparitions of other citizens are to be discounted? Perhaps it is not a surprise that Minister Bruton has been unable to define any objective criteria by which civil servants may distinguish earthly phenomenon that have a celestial origin, from those that just “any group of people” might experience.

When the Civil Registration Service asked the Church of the Flying Spaghetti Monster how many adherents they have in Ireland, the answer provided was “thousands, but many remain in hiding”. This is not surprising as Pastafarians have long discussed their persecution by Christians. However, the Civil Registration Service rejected their application based on this answer, as they claimed that the Church failed to “credibly answer … for the number of members”.

It should be noted that during July of 2014, in their concluding observations on the fourth periodic report of Ireland, the UN Human Rights Committee under the International Covenant on Civil and & Political Rights, stated the following:

“The State party should take … into account the Committee’s general comment No. 22 (1993) concerning the right not to be compelled to reveal one’s thoughts or adherence to a religion or belief in public.”

As such, it is the Human Right of any Irish citizen to remain an anonymous adherent to any religion if they so wish. Pastafarians have a Human Right to remain in hiding, due to their belief that they have been persecuted by Christians for hundreds of years.

The Dublin Buddhist Centre has been recognised as a religious body by the Civil Registration Service even though Buddhists do not believe in god. As such, it has frequently been observed by Buddhist scholars that Buddhists are atheists.

The Civil Registration Service is responsible for determining which organisations in Ireland are religious in nature and it appears to be incapable of understanding the difference between religiosity and theism. Unimpressive as this may be, the rejection by the Civil Registration Service did not actually refer to atheists per se but rather to membership of the Atheist Ireland organisation. Consequently, members of Atheist Ireland can now take their place alongside Elvis impersonators and those wearing unapproved hats, as the legislative targets of Minister Joan Burton. Members of Atheist Ireland … if you see any of these people please contact the nearest Garda station immediately.

Assuming that there are some members of Atheist Ireland reading this article who were baptised, if you have not been excommunicated or have not defected from the Roman Catholic Church, perhaps you would like to contact the Civil Registration Service on this matter? You could explain that it is “contradictory” for them to continue to recognise the Roman Catholic Church for the purpose of wedding solemnisation, while they count members of Atheist Ireland among their adherents.

Another reason provided by the Civil Registration Service for rejecting the application from the Church of the Flying Spaghetti Monster, is that a previous application had been received by their office, which referred to the “only leader” of the Church of the Flying Spaghetti Monster in Ireland. The most obvious question that this raises is why schism in other Churches wasn’t perceived as troubling by the Civil Registration Service. For some inexplicable reason, several Muslim organisations have been recognised as religious bodies in Ireland, without first succumbing to demands from Minister Joan Burton that the divide between Sunni and Shia be resolved in advance.

Furthermore, dozens of different Christian Churches with directly competing claims to exclusive authenticity, are also registered by the Civil Registration Service as religious bodies. For example, Catechism 1068 of the Roman Catholic Church states that:

“… it is through the liturgy especially that the faithful are enabled to express in their lives and manifest to others the mystery of Christ and the real nature of the true Church.”

We are left wondering why the Civil Registration Service did not then explain to all other Christian denominations in Ireland that they couldn’t be registered as religious bodies, since another body in Ireland had already claimed to be the “true Church” for Christians.

Not for the first time, efforts to legislate for religiosity in Ireland seem to be aspiring to Monty Python and falling short. Perhaps one day our politicians will legislate for all citizens equally, rather than seeking to identify the religious to award them with unwarranted privileges. It’s a crazy idea … but it just might be crazy enough to work. This matter has now been brought to the attention of the new Minister for Social Protection, Leo Varadkar. It remains to be seen if he will take a different approach to that of Joan Burton.

The really, truly True Believer™ of the Month Award September 2010

The really, truly True Believer™ of the Month Award November 2011

The really, truly True Believer™ of the Month Award June 2011

The really, truly True Believer™ of the Month Award January 2011

The really, truly True Believer™ of the Month Award November 2010