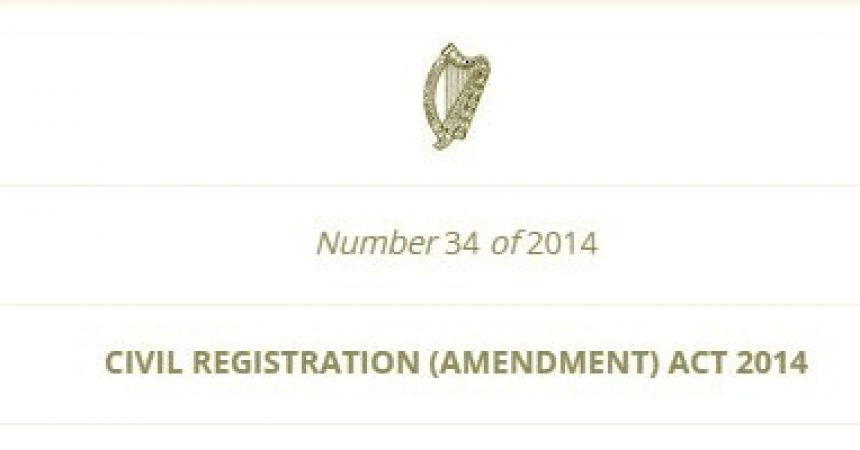 The Civil Registration Act is Dysfunctional

The Civil Registration (Amendment) Act 2012, was introduced by Minister for Social Protection Joan Burton. This Act allows both religious and secular bodies to solemnise civil marriages. Atheist Ireland has consistently opposed this legislation as it discriminates against non-religious citizens, while providing religious bodies with unwarranted privileges. We highlighted the lack of any rational or meaningful criteria that may be used to apply objective rules in the enforcement of the Act and now it seems that this deficiency is making the Act unworkable.

In response to the submissions in this area from Atheist Ireland, Minister for Social Protection Joan Burton made the following remarks in the Dáil:

Another concern I had about some of the material in the submission from Atheist Ireland is that we must be specific about the criteria because there are places in the United States where the criteria for solemnising are very broad and, as a result, an Elvis impersonator in Las Vegas can perform wedding ceremonies. None of us wants anything like that here. There is all-party agreement on that point.

However, the criteria that Minister Burton defined in the Civil Registration Act, not only discriminate against secular citizens, but they are also entirely unworkable to the point where this legislation is now routinely ignored.

Secular Bodies in Breach of the Law

According to the Civil Registration Act, a secular body may only solemnise civil marriages in Ireland if they do not promote a “political cause”. However, the Civil Registration Service has accepted the Humanist Association of Ireland (HAI) as secular body for the purposes of marriage solemnisation, despite the fact that this organisation overtly supports political causes in the area of education equality. Specifically, the HAI has made donations to bodies on the Register of Lobbyists, in an effort to achieve specific changes to particular pieces of legislation. In addition, the HAI has also met with the Taoiseach and the Minister for Education, as part of these efforts towards the worthy political cause of education equality. Notwithstanding this clear breach of the law, the HAI remains a registered secular body at the Civil Registration Service and HAI representatives continue to charge fees for the solemnisation of civil marriages.

Religious Bodies in Breach of the Law

According to the Civil Registration Act, a religious body for the purposes of marriage solemnisation has much reduced criteria to meet in order to be registered. The only requirement for becoming a religious body that can solemnise civil marriages, is that the adherents “meet regularly for common religious worship”. However, the OneSpirit InterFaith Ministers don’t have any adherents. They only have ministers who can charge a fee to solemnise civil marriages, since they have been successfully registered as a religious body by the Civil Registration Service. This is despite the fact that the OneSpirit InterFaith Ministers have confirmed to Atheist Ireland that they don’t currently hold any meetings, they never have had any meetings, and they have no plans to arrange any meetings in the future.

Rejection of Religious Bodies that Adhere to the Law The Church of the Flying Spaghetti Monster was rejected by the Civil Registration Service and also by Minister for Social Protection Joan Burton on appeal. The final reason given for the rejection of this appeal to Minister Burton, was that “each member of CoFSM can define and interpret their own belief system” such that “it is very difficult to see how this constitutes common religious worship”.

However, there is no requirement within the Civil Registration Act for all members of a religious body to hold identical belief systems. In fact, in this regard the Church of the Flying Spaghetti Monster is very similar to the Roman Catholic Church and we can see this as the Irish bishops regularly publish surveys that describe the various beliefs of their adherents. That is, the Catholic Church allows its adherents to “interpret their own belief system” too and yet they have been successfully registered by the Civil Registration Service. It can be observed within these survey results that for example, only around half of Irish Catholics believe in the Christian doctrine of Hell. The recent Marriage Equality referendum also provides further strong evidence that very many Irish Catholics each have their own belief system, which differs significantly from that of their Church hierarchy and their Bible. In addition, Catechism 1776 of the Roman Catholic Church states that:

“Deep within his conscience man discovers a law which he has not laid upon himself but which he must obey. Its voice, ever calling him to love and to do what is good and to avoid evil, sounds in his heart at the right moment. . . . For man has in his heart a law inscribed by God. . . . His conscience is man’s most secret core and his sanctuary. There he is alone with God whose voice echoes in his depths.”

So the formal Roman Catholic Catechism, which describes the beliefs of the Catholic faithful according to the Church itself, also allows adherents to “interpret their own belief system” based on their own individual conscience. In addition, on 14th November 2012, Pope Benedict XVI made the following comments in an address at the Paul VI Audience Hall:

“A particularly dangerous phenomenon for faith has arisen in our times: indeed a form of atheism exists which we define, precisely, as “practical”, in which the truths of faith or religious rites are not denied but are merely deemed irrelevant to daily life, detached from life, pointless. So it is that people often believe in God in a superficial manner, and live “as though God did not exist” (etsi Deus non daretur). In the end, however, this way of life proves even more destructive because it leads to indifference to faith and to the question of God.”

It seems that the Irish State now proposes that Roman Catholic belief systems may range from those of the most pious of Popes to those of the Catholics that Pope Benedict describes as “practical atheists”, while a lack of consistent belief systems across the members of the Church of the Flying Spaghetti Monster, can be used as a reason to refuse their application to be registered as a religious body. This is the kind of anomaly that arises when there are no meaningful or objective criteria against which to evaluate applications.

The rationale for the criteria defined within the Civil Registration Act, as described by Joan Burton herself in the Dáil, was to make it illegal for Elvis impersonators to act as celebrants at Irish weddings. If Irish citizens have their hearts set on being married by an Elvis impersonator, it is not clear why Joan Burton feels it is her duty to make this illegal. However, even just a brief consideration of this aspiration for the legislation as compared to the criteria eventually defined, illustrates how ridiculous the Civil Registration Act really is.

Minister Burton feels it is entirely sensible to have a wedding celebrated by a man wearing a pretty frock, who will use the ceremony to transubstantiate a glass of wine into the blood of an Iron Age Jewish carpenter, with the power of some special words. That is seems, is perfectly reasonable according to Minister Burton. However, if the celebrant was to wear a white jump suit instead of an ornate dress, then that is the point at which Minister Burton feels proceedings would become so irrational that Irish citizens must be protected by law. Weddings with white jumps suits are the appalling vista that she feels duty bound to prohibit within the Civil Registration Act. With such a preposterous premise for a piece of legislation, as defined by the legislator herself, it is no wonder that this law is routinely ignored.

In the case of “Manoussakis and Others versus Greece” in 1996, the European Court of Human Rights ruled that:

“The right to freedom of religion as guaranteed under the Convention excludes any discretion on the part of the State to determine whether religious beliefs or the means used to express such beliefs are legitimate.”

As such, the subjective view of civil servants about the form of worship that is practised by any Church is irrelevant. It is not the function of any State body to determine which forms of religious worship are valid and which are not. However, not only is this happening in Ireland today but it is being done without any reasonable criteria, such that civil servants are simply making it up as they go.

The Civil Registration Act is dysfunctional. The incoming government should legislate to allow the same criteria to be applied to both religious and non-religious citizens with respect to civil marriage, in order to rescue the credibility of this civil process.