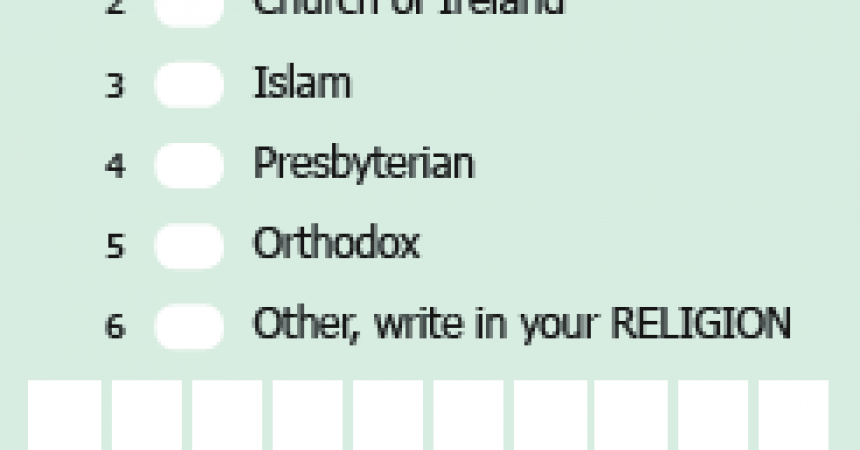 With the census coming up on April 24th next month there are some points not covered in the FAQ on census.ie

The census questions are split into two blocks, one for individual questions and one for household questions.

Question 12 of the individual block asks “What is your religion”

The guidelines the CSO gives for answering this question are

“Everyone should answer this question, whether or not they have a religion.

This question is not about frequency of attendance at church or other place of worship. People should answer the question based on how they feel now about their religious beliefs, if any. The question is asking about the person’s current religion or beliefs and not about the religion the person may have been brought up with.

If the person has a religion they can identify that religion by ticking one of the tick box categories, or by writing in a description of your religion or beliefs in the write-in boxes.

If they do not have a religion – they should go to the end of the question and mark the ‘no religion’ box.”

Ask for an individual census form at the door

What is not clear from the census website is that when your enumerator calls to your home you can request an individual census form and/or confidentiality envelopes at the door. This means that you alone are responsible for answering the question about your religion on the census.

What if your census form has already been delivered?

If the form is already delivered then you can email copfieldmanagement@cso.ie stating your name and address and they will request that the census enumerator deliver an individual census form to you.

If you are not religious be counted as having no religion!!!