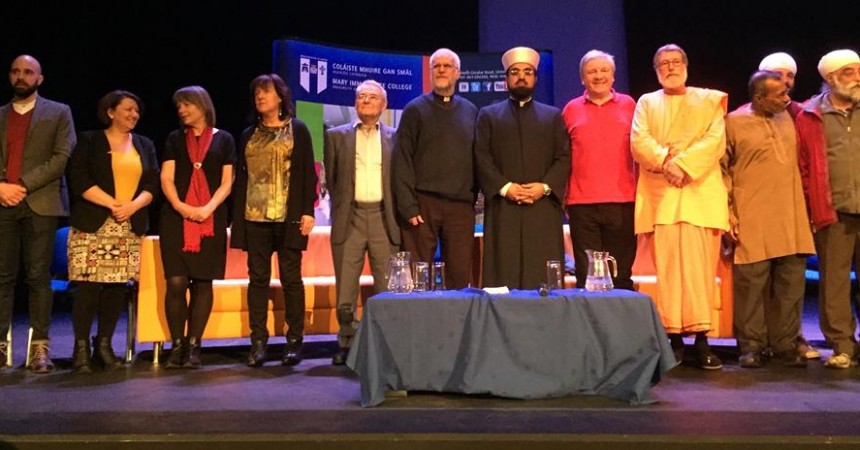 Jane Donnelly and Michael Nugent took part in a very positive Inter Belief Dialogue conference in Mary Immaculate College Limerick yesterday. There were representatives from the NCCA, which is currently preparing a State course for primary schools about religion, beliefs and ethics, as well as speakers from various religious and nonreligious perspectives.

Jane Donnelly and Michael Nugent of Atheist Ireland, Pastor Nick Park of the Evangelical Alliance of Ireland, and Imam Ibrahim Noonan of the Ahmadiyya Muslim Community in Ireland spoke together in support of separation of church and state, particularly in the Irish education system. This was on behalf of a historic joint initiative that launched last week.

Our joint aims include:

Shayk Umar Al-Qadri also addressed the conference. He said that, as a Muslim theologian, he has not sent his children to the local Muslim national school. Instead he has sent them to the local Community National School. His reason: in a plural society like Ireland, we have to live and interact with each other after school, so what is the point of having children interact only with Muslim children in school?

He also said that he opposed children being taken out of class to be taught about their own religion only. He believes that all children should be in the same class and should be taught about all traditions, whether religious or nonreligious. He favours schools having LGBT weeks to promote respect, tolerance and acceptance, and says that schools should also have Muslim, Christian, Jewish and atheist weeks for the same purpose.

During the closing panel, Michael Nugent made the above concluding remarks on behalf of the new secular alliance of atheists, Evangelicals and Ahmadiyya Muslims.

Finally, above are the concluding remarks of all of the panel of the conference speakers and/or guests representing different worldviews. The conference was organised by Anna Lindh Foundation, Chester Beatty Library, Dublin Interfaith Forum and Mary Immaculate College.

Jane, Michael, Nick and Ibrahim were very happy with the progress made at the conference, and we made some valuable new contacts with whom we will continue our dialogue for secularism generally and a secular education system in particular.