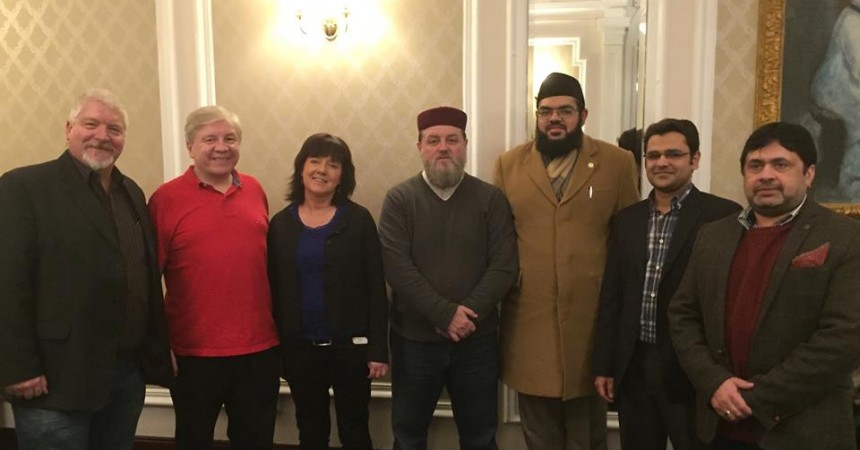 Yesterday in Dublin, for the first time in the history of the State, Atheist Ireland, the Evangelical Association of Ireland, and the Ahmadiyya Muslim Community in Ireland united to start a campaign for Separation of Religion and State. We agreed that the first steps of this campaign will be:

This is a historic meeting: the first time in the history of the State that Irish Atheists, Evangelicals and Ahmadiyya Muslims are uniting to campaign for Secularism. Whatever our differences of worldviews, we all agree that each person should be treated with respect, our right to hold our beliefs should be treated with respect, and the State should treat us all equally before the law by remaining neutral between religious and nonreligious beliefs. That is what a true Republic should looks like.

I’m delighted to be here this evening to support the separation of Church and State and in particular secular education. I especially welcome Ibrahim and Nick, both from minority faiths who also support these policies. In State-funded schools our children are isolated with minority faith children when they opt out of Catholic religion class. And so our children and the children from minority faiths get to know each other well. They become comrades and they understand all too well what religious discrimination is. In a secular education system, the State would remain neutral between religions and beliefs, it would not enable private bodes to evangelise minorities, and it would have a positive obligation to ensure that the rights of minorities are protected. That is the type of State that together we can help to bring about.

History demonstrates that when Church and State become intertwined the results are usually detrimental to both parties. In Ireland we are still in the process of making the transition from a ‘moral monopoly’ to becoming a truly diverse modern nation which provides equal opportunities and freedoms for citizens of all religions, and also those of no religion. This transition has profound implications for future legislation concerning education and other areas of public policy. I would ask candidates in the coming election to make a firm commitment to the principle of separation of Church and State, and, if elected, to work for the removal of discrimination against minority groups.

The Ahmadiyya Muslim Community has always adhered to the fact that Religion and State are two different entities. Therefore it views that secular knowledge should be given eminence within the school curriculum. However if any school desires that religion be taught, then not one or two ideologies should be given importance, but rather a broader picture of each religion should be presented with its basic fundamentals. The Ahmadiyya Muslim Community is subjected to brutal persecution in many countries. The reason for this being partially that at a young age children are taught in school that the Ahmadiyya are non-muslims and are liable for death due to their beliefs. This act of bigotry has been a harbinger for many members of the community being killed. Hence the Community feels strongly that secular knowledge should be the modem of education in school.

Religious oaths in the Irish Constitution