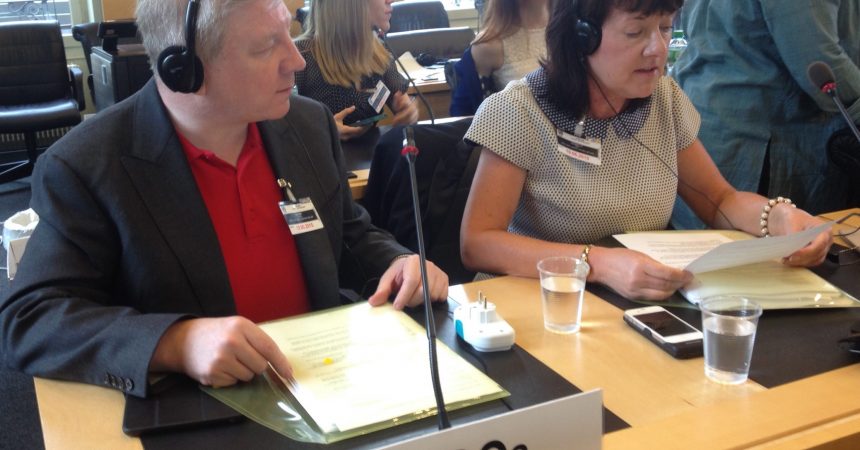 This Thursday, in Geneva, Atheist Ireland will be advocating for children in Irish schools, as the UN questions Ireland about its human rights record under the Convention on the Rights of the Child.

This is our sixth year raising religious discrimination in Ireland with the UN, Council of Europe and OSCE.

We will be raising four main problems.

The State claims it must maintain the laws that allow State-funded schools to discriminate on the ground of religion, because it has a Constitutional obligation to buttress discrimination arising from the tenets of religion. In the Louise O’Keeffe case, the European Court found that, even if it allowed Patrons to run schools, the State still has a duty to protect the human rights of children in schools. The State is trying to limit this to instances of sexual abuse.

What we want: the State should explain how its Constitutional obligation is compatible with its international human rights obligations, protect the human rights rights of children in schools, and ensure an effective remedy for breaches of rights.

The State has established only 30 multi-denominational primary schools since 2011. It is also asking the Catholic Church to divest some schools to other Patrons in areas with several schools. In practice, this policy has ground to a halt. Also, the Church is seeking a stronger Catholic ethos in schools they would retain in most localities (1,700 rural areas with only one school).

3: Opting Out of Faith Formation and Integrated Religious Curriculum

Denominational schools have faith formation in religious instruction classes. Under Irish law, a child has the right to opt out of any subject that is contrary to the conscience of their parents. However, opt-out arrangements are ad-hoc, and in many cases the child still sits at the back of the class.

Also, religion is integrated throughout the whole school day, and the State curriculum is delivered in accordance with the ethos of the Patron. In 2014, the UN asked Ireland about providing a neutral studying environment outside of religious instruction classes. The Irish Human Rights and Equality Commission wants schools to deliver information about religion in an objective, critical and pluralistic manner that avoids indoctrination.

What we want: the State should require all schools to enable children to opt out of religious instruction classes, end the integrated religious curriculum, and follow the advice of the IHREC and the UN about neutral delivery of the curriculum.

Denominational schools can give preference to children of that religious denomination, or refuse admission to other children in order to protect the school’s ethos. So, in the 20% of primary schools that are oversubscribed, children of minority or no religion can be denied access to their only local school. Denominational schools can also discriminate against teachers and prospective teachers on the ground of religion, thus denying children access to a diversity of the best teachers selected on merit.

What we want: the State should should amend Section 7(3)(c) of the Equal Status Act to prohibit discrimination in access to schools on the grounds of religion, and amend section 37(1) of the Employment Equality Act in a way that bars all forms of discrimination in employment of teachers.