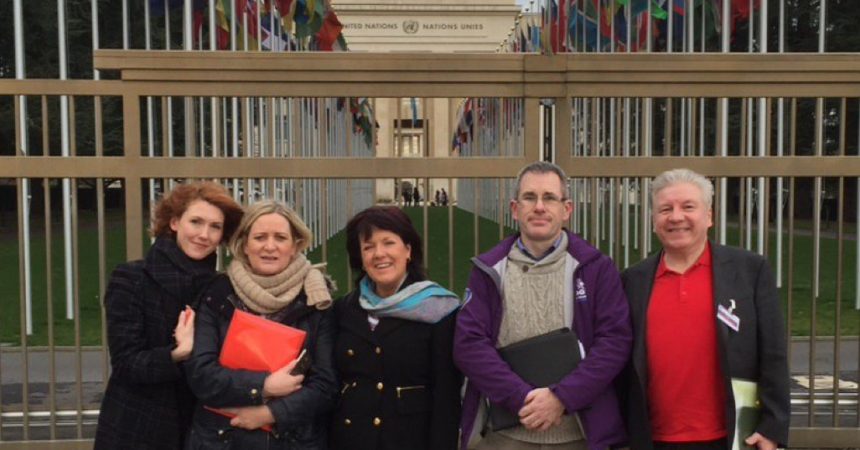 Following the UN Children’s Rights Committee questioning of Ireland today in Geneva, Atheist Ireland is confident that the UN will yet again tell Ireland to stop breaching the human rights of atheist and minority faith families in Irish schools.

Atheist Ireland had very positive interactions with the Committee here, during our formal and informal briefings. While people in Ireland tend to see our school system as normal, we always find that legal experts from other countries are amazed at the entanglement of church and state in Ireland. Atheist Ireland representatives with other NGO colleagues at the UN

Atheist Ireland is pleased that the UN raised the problem of religion being integrated throughout the curriculum in Irish schools, as well as its consistent calls to Ireland to provide nondenominational schools, end religious discrimination in school access, and enable opt-outs from faith formation.

The Irish State’s responses were typically misleading. They raised the Admissions to Schools Bill without admitting that it retains the right to discriminate against children on the ground of religion, and they described as “slower than desired” the flawed plan to divest patronage of schools that has effectively ground to a halt.

The Irish State said that the minister for Education had said she will change the Equal Status Act to stop schools discriminating on religion in access to schools. But the Minister said in December not that she would do that, but that it must happen and that it should happen in the next parliament. That is not a commitment to do anything.

Atheist Ireland is confident that, when the UN publishes its concluding observations on 4 February, it will add to the eight sets of findings from various UN and Council of Europe bodies in recent years, telling Ireland to stop breaching our human rights. We will highlight this during and after the coming General Election.