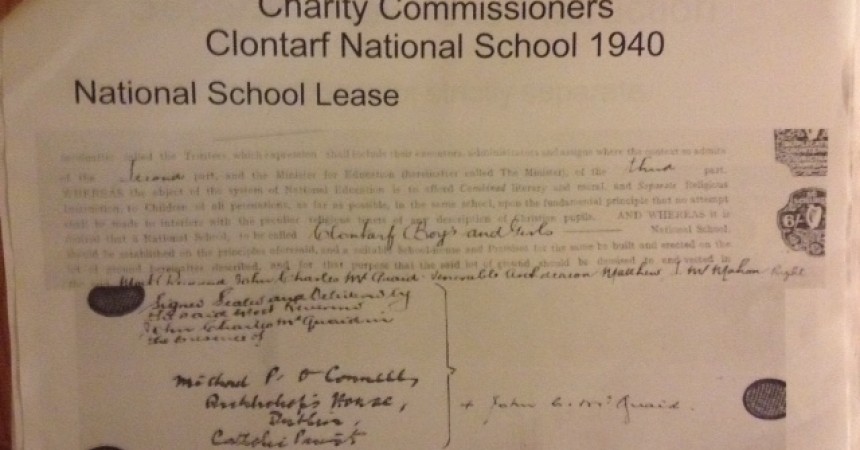 The Admission policy of a publicly funded National School, St. John the Baptist in Clontarf, states that the Archbishop of Dublin, “shall be the person who decides whether a boy is a member of a Church which is in full communion with the Church of Rome or otherwise”.

This is the same school about which the Minister for Education personally apologised to a parent whose child was denied access because he was a ‘Category Two Boy’. It is also well known because the author John McGahern was a primary schoolteacher there, and was fired after he wrote the novel The Dark, which the ArchBishop of Dublin considered to be pornographic.

St John the Baptist Junior Boys’ School (Belgrove) is a National School under the patronage of the Catholic Archbishop of Dublin. It supports and upholds the Catholic Ethos.

The school was established for all children in the local community of all religious denominations, and was to have separate religious and secular instruction. Over the years the Catholic Church has gained control over admissions and the teaching of religion in the school. The school is still a publicly funded National School, and has been refurbished in recent years at the expense of the State with four schools now on the campus. Earlier this year when Atheist Ireland met the Taoiseach and the Minister for Education, Jan O’Sullivan personally apologised to Derek Walsh, a parent who was told when applying to this school that his child was a “category two boy” who would only be considered for a place in the school if there was room after all of the Catholics were accommodated.

According to the Irish National Schools Trust, the current lease for this school was signed in 1940 and is still in place. The Lease states that the school will be open to “all religious denominations” and that there will be:-

“combined literary and moral, and Separate Religious Instruction, to Children of all persuasions, as far as possible in the same school, upon the fundamental principle that no attempt shall be made to interfere with the peculiar religious tenets of any description of Christian pupils”.

The Lease was signed by the then Archbishop of Dublin John Charles McQuaid in 1940.

To recap, just in case you can’t take this in. In Ireland we have a publicly funded National School, that was established at no cost, to educate all children in the community. The original land and building were provided by a local Protestant Landlord. The current Lease for the school (still in place), signed by the Catholic Church, agrees that this National School will be open to all religions, that there will be combined literary and moral, and Separate Religious Instruction for all children.

In 2015 in this Republic of ours, we now have a publicly funded National school, where the agent of a foreign state (the Archbishop of Dublin), gets to decide which local children will gain admission to the school. The school evangelises all children into the Catholic faith and combines religious and secular subjects contrary to the National school Lease that they signed. If your child is not a Catholic, or even the right kind of Catholic, then your child is classed as a “category two boy”.

In Ireland publicly funded National schools have turned into schools where the Catholic church have complete control and can discriminate against religious minorities and atheist and secular families.

The constitutional rights of nonreligious parents in Irish schools

Does Tipperary Education and Training Board have a Christian ethos?