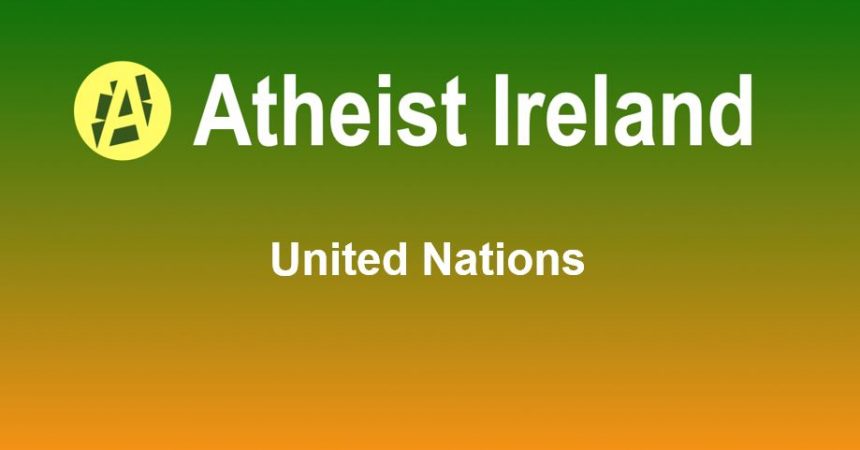 Submission to Department of Justice for UN review of Ireland

Atheist Ireland has made the following submission to the Department of Justice as part of the process of Ireland being reviewed by the United Nations Human Rights Council next year.

Freedom of Religion and Belief

2.1 Amend Article 40.6.1 of the Constitution, and repeal sections 36/37 of the Defamation Act, to remove the offence of blasphemy.

2.2 Replace the obligatory religious oaths in Articles 12.8, 31.4 and 34.5 of the Constitution (for President, Judges and Council of State), and optional oaths and declarations in court, with single neutral declarations that reveal no information about the beliefs of the oath-taker.

2.3 Amend Article 40.1 of the Constitution to guarantee equality to all and to proscribe discrimination (direct or indirect) in any area of law on non-exhaustive grounds, as recommended by the Irish Human Rights Commission and the Constitutional Review Group.

2.4 Amend or repeal Section 15 of the Education Act 1998, Section 7(3)(c) of the Equal Status Act 2000, and Section 37(1) of the Employment Equality Act 1998, to oblige publicly funded schools to deliver educational services, including employment, state curriculum and enrolment, in an objective, critical and pluralistic manner, and with no religious discrimination.

2.5 Replace the patronage system with an inclusive secular system, in which the foundation is State-run schools that are neutral between religions and atheism, and in which private ethos schools are an add-on alternative as opposed to being the basis of the school system.

2.6 As an interim measure for some families, and only as that, accelerate the divestment programme and ensure the widest possible availability of multi and non-denominational schools. In areas where there is only one standalone school, enforce divestment or change of ethos.

2.7 Ensure workable policies to accommodate children who have opted out of formal religious education. Ensure such children are not subject to religion being integrated throughout the remainder of the curriculum, even in denominational schools.

2.8 Ensure an effective complaints mechanism and an effective remedy, in practice and in law, to vindicate breaches of human rights in schools.

2.10 Repeal Article 40.3.3 of the Constitution, to enable the Oireachtas to legislate for the right to abortion. Decriminalise abortion by repealing sections 22/23 of Protection of life During Pregnancy Act 2013. Repeal Abortion Information Act 1995. Provide a human rights compliant framework for abortion, in law and in practice.

2.11 Implement full and independent inquiries into symphysiotomy and Magdalen laundries, leading to prosecutions where wrongdoing is established. Adopt and implement a consistent approach, in line with international human rights law, to all inquiries into historical abuse.

3. Freedom of Religion and Belief Overview

3.1 The chairs of both major UN Human Rights Committees have strongly criticised Ireland’s lack of separation of church and state.

3.2 In 2014, the State accepted, under strong pressure from the UN Human Rights Committee, that majority votes cannot be used to derogate from Covenant obligations, yet Ireland continues to deny human rights to atheists and minority faiths based on majority votes.

3.3 The State now claims that it is constitutionally obliged (not merely permitted, but obliged) to allow religious discrimination to continue in order to buttress religion.

3.6 The Department of Justice has informed Atheist Ireland that the Government is constitutionally obliged to allow religious schools to give priority to coreligionists, regardless of whether or not the State funds those schools, and they cannot constitutionally go any further in removing the exemptions that State-funded schools with a religious ethos have.

3.7 However, many relevant bodies and citations do not share the Government’s certainty that removing these discriminations would be unconstitutional. These include:

3.8 The Supreme Court has said it is the duty of the Oireachtas to balance competing constitutional rights in legislation. The Oireachtas cannot fulfil this duty if the Government closes down debate, without publishing the legal opinion it is relying on.

3.9 This is particularly important when eight different United Nations and Council of Europe bodies have told Ireland this religious discrimination is breaching the human rights of atheist and minority faith families and teachers.

3.10 If constitutional change is required to end religious discrimination, then urgently hold a Religious Equality Referendum.

4.1 Ireland introduced this law despite having informed the Venice Commission in 2007 that in general the legislation already in place provided adequately for these matters. Ireland introduced a Blasphemy law in a country where the non-religious do not enjoy the right to equality before the law without discrimination or the right to an effective remedy.

5.1 Under the Constitution, not only judges and the President, but also members of the Council of State are required to swear a religious oath, including Taoiseach, Tánaiste, Chief Justice, President of the High Court, Chairman of Dáil and Seanad, and Attorney General.

5.2 In courts, religious oaths are optional, but the law governing the administering of oaths and affirmations in Ireland breaches Article 17.1 of the ICCPR. Atheists are obliged to object publicly to taking a religious oath. In 1990 the Law Reform Commission recommended abolishing the oath and replacing it with a single neutral declaration.

6.1 Ireland fails to protect the rights of children and teachers in publicly funded National schools. Parents are legally obliged to send their children to schools where there is no effective remedy to vindicate their Covenant rights.

6.2 The State claims parents are exercising choice by sending their children to these schools, but the European Court in Louise O’Keeffe found that there was no choice in reality.

6.3 Nothing has changed on the ground for atheist and secular families in the education system.

6.4 The State has not put in place any effective remedy to vindicate the rights guaranteed under the Covenants or explained how it intends to give effect to the O’Keeffe case judgment.

6.5 No complaints mechanism has been put in place. The O’Keeffe judgment found Ireland in breach of Article 3 (protection from abuse) and 13 (the right to an effective remedy) of the European Convention.

6.6 No steps are being taken to ensure the rights of children of minority religions or non-faith are recognised in the Education Act 1998.

6.7 No non-Denominational schools have opened, as the UNHRC recommended. The small number of Educate Together schools are multi-denominational.

6.9 Despite the UN specifically referring to secular parents and the religious integrated curriculum in their Concluding Observations, the state has not changed one single piece of legislation or produced any statutory guidelines to protect the rights of secular families.

6.10 The divestment programme, the Report from the IHRC and the Forum have not made a difference on the ground, because the Constitution obliges the state to give priority to religion. Equality before the law and equal protection without religious discrimination take second place to promoting religion, undermining the rights guaranteed under Covenants.

6.11 Section 15.1 of the Education Act 1998 obliges the Board of Management to manage the school on behalf of the patron of that school.

6.12 Section 15.2(b) of the Education Act 1998 obliges Boards of Management of all schools to uphold and be accountable to the patron for so upholding, the characteristic spirit of the school.

6.13 The characteristic spirit of the school is known as the ethos of the school. Despite being obliged to uphold this ethos, schools are not legally obliged to write it down. Parents are not aware from the Admissions Policy how exactly it will operate.

6.14 The ethos of a school can include any of the following, participation in some of which can be declared obligatory:

6.15 Nothing in the Education Act 1998 obliges any school to deliver the State curriculum in a neutral and objective manner.

6.16 Section 6 (a) of the Education Act 1998 obliges every person concerned in the implementation of the Act to give practical effect to the constitutional rights of children.

6.17 But Rule 68 of the Rules for National Schools obliges schools to integrate a religious ethos throughout the entire curriculum. The Forum recommended, as a first step, that Rule 68 should be deleted as soon as possible.

6.18 The State is aware that there is no practical application given to the Constitutional right of parents to opt their children out of religious instruction classes, or religion that is integrated into the curriculum and the daily life of the school.

6.19 The Government is proposing two Bills that it claims will address religious discrimination. In reality neither Bill will do this. Indeed, both Bills retain the right of publicly funded schools to continue to discriminate on the ground of religion.

6.21 The Section 37 Amendment Bill will not protect teachers who are atheists or members of minority faiths from religious discrimination. IHREC has said that the approach of this Bill is undesirable, and may continue to leave the State exposed to a breach of its obligations under European Equality Directive 2000/78.

6.22 The only way to end religious discrimination in Irish schools is to replace the patronage system. The Oireachtas Education Committee has concluded that multiple patronage and ethos as a basis for policy can lead to segregation and inequality, and that the objectives of admission policy should be equality and integration.

6.23 The divestment programme must only be seen as an interim measure for some families. Even at its maximum planned extent, most parents (i.e. families in areas where there is only one standalone school) will not have access to a school that does not discriminate on the ground of religion.

7.1 Atheist Ireland is a member of the Coalition to repeal the Eighth Amendment to the Irish Constitution. We endorse the recommendations on abortion rights made in the Your Rights Right Now civil society submission.

8. Historic Abuse of Women and Children