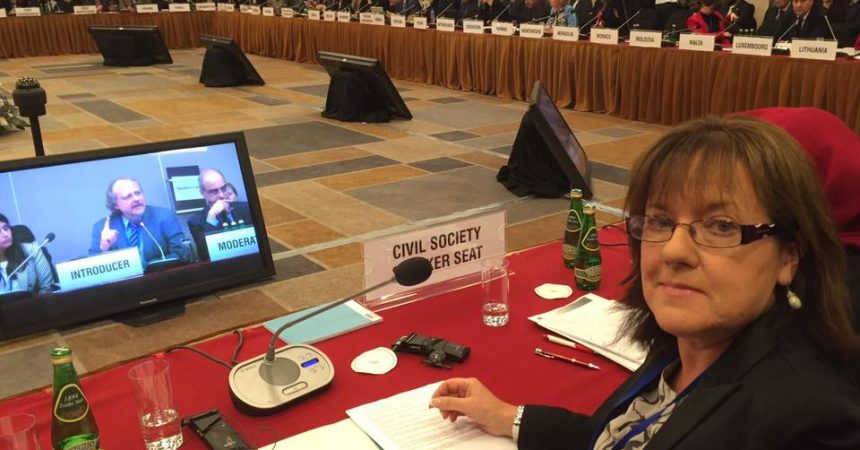 Atheist Ireland made two formal contributions to today’s OSCE human rights conference in Warsaw, highlighting religious discrimination against atheists and members of minority faiths in Ireland and throughout the OSCE.

Jane Donnelly spoke on discrimination in the Irish education system, and Michael Nugent spoke on other forms of discrimination. We also engaged in lobbying with various delegations. Here are the two formal contributions to today’s sessions:

Ireland openly discriminates against atheists and members of minority faiths in our education system.

The Irish State claims that it is constitutionally obliged to support this discrimination, in order to buttress religion.

Almost all of our primary schools are funded by the state but run privately by churches, 90% by the Catholic Church. The State cedes control of the education system to these churches.

They can insist that children of non-Catholic families are baptised into the Catholic Church in order to get into their only local publicly funded school.

They are legally obliged to integrate religion throughout the entire curriculum, and no optout is provided.

Also, Ireland legally denies teachers equal access to the teaching profession, in almost all State funded schools, if they are atheists or members of a minority faith.

Not only that, but Ireland claims an exemption from the European Employment Equality Directive in order to continue this open religious discrimination.

All of our equality laws support this religious discrimination.

To add insult to injury, Ireland is now amending this law to protect Catholic LGBT teachers, which of course we support, but retaining the right to discriminate against teachers who are atheists or minority faith members.

This religious discrimination, coordinated jointly by the Irish State and the Catholic Church, breaches the human rights of freedom of religion or belief, freedom from discrimination and equality before the law.

Ireland has ignored eight separate requests from the United Nations and Council of Europe to end this religious discrimination.

We ask the OSCE to ask Ireland and the Holy See to end this religious discrimination, and to respect our human dignity and our human rights.

In Ireland, the State claims that it is constitutionally obliged to discriminate against atheists in order to buttress religion.

Several UN human rights committees have told Ireland to stop breaching our rights, and the chair of one said that Ireland’s lack of separation of church and state makes us seem
like a developing country.

This is the same Holy See whose Cardinal Cormac Murphy O’Connor once told the BBC that atheists are not fully human.

A democratic secular State is the only way to respect equally everybody’s human right to freedom of religion or belief.