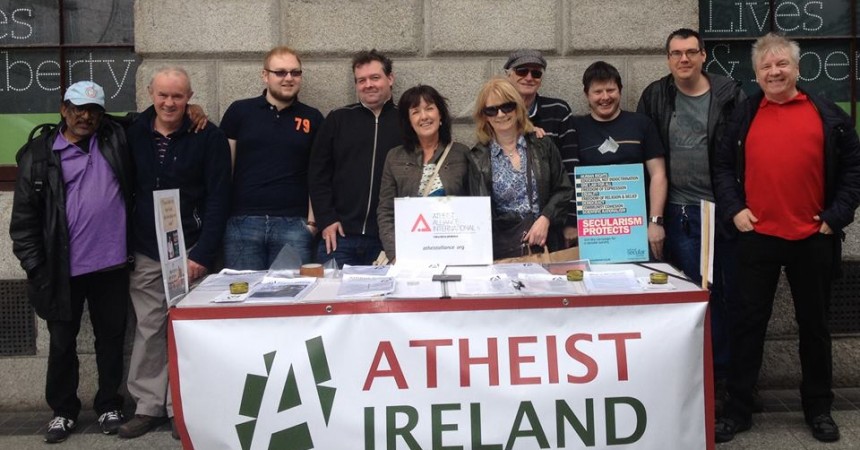 Celebrating the Third Anniversary of the Atheist Ireland Information Table

Taking a Stand at the GPO

There is so much to say about this but one must be brief. Let us begin by considering the history of establishing the Atheist Information Table and why it was vital to make such information available to the Irish public on the streets of Dublin’s fair city.

Around 2010, many of us in Atheist Ireland had noticed that there was an increase in various religious groupings who had tables, soap boxes and megaphones etc. in the O`Connell Street/Henry Street area. It was decided that, over a period of two years, we would engage these groups in discussion, in order to ascertain why they thought the way they did and whether there was value in spreading their message by way of information tables in the area.

Unfortunately, speaking to a number of these groupings was similar to talking to a wall. Hence, it was decided that the only way an alternative view could be heard by the person on the street was to set up an Atheist Information Table.

To give an indication of the various different hues of groups in and around the said area, there are, to name but a few; Muslims, Mormons, Baptists, Born Again Christians, Jehovah’s Witnesses, Legion of Mary, Scientology, Several African Christian groups, Falun Gong, Hare Krishna, Jesus singers and of course Dessy the hell fire Christian! And that is only on the North side of the city!

The initial establishment of the Table was tense, to say the least, as those of us who were present on that eventful day did not know quite what to expect from the public or the other religious groups that surrounded us. Together as one, I stood proudly with Michael Nugent, Jane Donnelly, Joe Davis and John O`Grady. Fortunately for us and Atheist Ireland all went well and continues to do so.

However, the strength of the Table lies in the ability of Atheist Ireland volunteers to engage with the public at large to discuss various issues in relation to Atheism, with those who may have questioned their belief system. Doing this in real time and face-to-face shows our willingness to engage. Moreover, the simple presence of the Table in a popular area in Dublin provides Atheist Ireland with visibility and recognition to the public.

Without a doubt we are making history. Not only historic for Atheist Ireland, but for Ireland. This is the first time in this State, and according to Atheist Alliance International the first time in the world, that an atheist information table has been established in a capital city on an on-going basis. Well done Ireland!

To those volunteers such as Ashling O’Brien, Dave Kiernan, Conor Murphy, Ewan Duffy, Dave, Brendan Perry, Jane Donnelly, Graham Pouter, Maureen Meleady and many, many others who have attended at the table should be very proud of their commitment to a worthy cause. I salute them. They, after all, are the front line troops in this campaign. Each season they have braved the weather and to date no month has been missed.

This is a small step for us to take but it`s in the right direction to a forward looking investment for a better future for humanity.

It has been a positive experience for me and I am sure for all who have had an input into this noble initiative.